Who Thought This Was a Good Idea? And Other Questions You Should Have Answers to When You Work in the White House 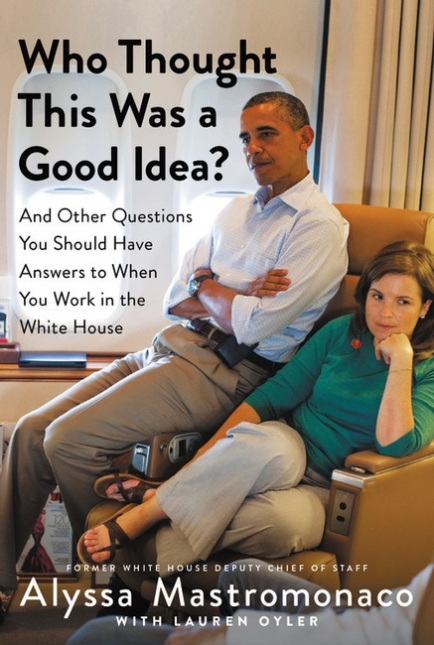 Political memoirs are often intimidating behemoths, and despite considering myself a civic-minded woman who follows politics, I tend to avoid them. The sometimes 400-plus-page tomes can be unappealing in their self-righteousness, with their black-and-white jackets featuring photos of the knowing, closed-mouth smiles of this former world leader or that ex-secretary of state.

Who Thought This Was a Good Idea? And Other Questions You Should Have Answers to When You Work in the White House by Alyssa Mastromonaco is a clear departure from the norms of the genre.

The memoir describes how Mastromonaco ended up in Barack Obama’s inner circle, from her first encounter with politics (jumping on Newt Gingrich’s car in protest as an undergraduate) to becoming, at 32, the youngest woman to hold a senior position at the White House.

On the cover, the author sits in a seat on what we can only assume is Air Force One, with President Obama sitting on the armrest next to her. She’s wearing sandals, and her feet are folded underneath her — a casual, candid photo that reflects the honesty of the book.

That honesty is of the unflinching, self-deprecating, maybe-this-is-bordering-on-too-much sort. Within the first 15 pages, the reader learns about how difficult it is to leave the White House to buy tampons, which leads to a menstrual emergency in which Mastromonaco bleeds through her “blue-and-white houndstooth capris from J. Crew.”

Twenty-five pages later, she describes bowel troubles while accompanying the president to meet the pope at the Vatican.

“The paintings, the architecture — you don’t have to be Catholic to think it’s incredible. It’s an overwhelming place to have an IBS attack…This was the moment when I had to do some reckoning. What are my priorities? Am I going to tell someone I’m about to have diarrhea in the hopes of getting help?”

If the book sometimes feels like it ventures too far into cringe-inducing territory, the no-holds-barred style is ultimately its greatest strength.

Just like tabloid photos of famous actors chewing with their mouths open remind us that “Celebrities are people, too!” this book reminds us that even those in the most high-powered jobs are no different than the rest of us.

Though the White House is locked behind a six-foot-tall fence, requires a high-level security clearance to enter, and is patrolled by armed Secret Service personnel, for the people who work there, it’s just an office. There are birthday parties with cake. There are inter-office email flirtations. There are moments that lead to stern scoldings from the boss.

Only, at the White House, when Mastromonaco is being reprimanded, it’s by the president of the United States. When there’s an emergency at work, it’s because there’s an emergency in the world. The stakes are high, like when she was one of the people leading the executive branch’s response to Hurricane Sandy.

At a meeting on how to respond to that natural disaster, Mastromonaco had to overcome self-doubt to voice her idea of making a PSA informing people how to get help.

“For some people (like me), gathering the courage to speak up in meetings is a skill that requires practice. There are the normal fears — that you’ll sound stupid, that everyone else has already thought of what you’re going to say and has moved on, that what you thought was a foolproof plan has an obvious hole in it. And then there are the fears that you develop when your meetings are with the most important and powerful policy makers in the country.”

Even people at the White House get too nervous to speak up during meetings. Stars: They’re just like us!

Toward the end of the book, Mastromonaco tells us her motivation for wanting to share her experience: “The idea was an advice book/memoir geared toward women between the ages of 15 and 25…I hoped it could help women see themselves in government.”

Alas, the parts when the “advice book” goal becomes too obvious are the weakest. Twice during the book, Mastromonaco breaks away from her narrative to give tips on preparedness and finances. The interludes are awkward, shallow, and inconsistent departures from her story.

There are enough advice books out there that tell us about the importance of credit scores. And we already know about getting a good night’s sleep. Her experiences at the White House, holding the highest position a woman ever held there at her age, are what make her unique. The lessons that stay with the reader are buried within the narrative, when she shows instead of tells.

Ultimately, Mastromonaco convinces us that if you have a little bit of tenacity and aren’t scared of embarrassing yourself, you may just end up working side by side with the president. She’s someone who’s smoked pot more times than she can count, loves the Grateful Dead, and didn’t go to an Ivy League college.

If she did it, you can, too. And, hey, it won’t happen unless you try.

Avery J.C. Kleinman is a producer for the Kojo Nnamdi Show, a program on WAMU 88.5 FM, Washington, DC’s NPR station. Follow her on Twitter at @averyjck.