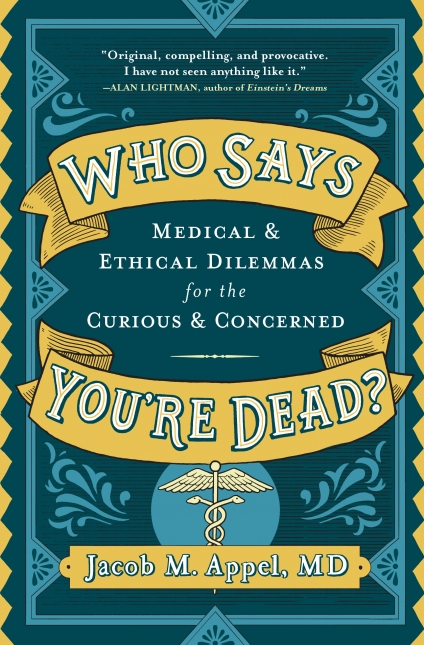 Why is an erudite essayist discussing who slept with whom, sperm and egg ownership, and even whether celebrities should cut in line and get organ transplants before others? In Jacob M. Appel’s Who Says You’re Dead?, this author of short stories, novels, and nonfiction reveals where he gets the ideas for some of his most improbable tales: his work.

Appel is a physician, lawyer, and ethicist who spends his days at the Icahn School of Medicine at Mount Sinai, where he is the director of Ethics Education in Psychiatry. He sees people at their most vulnerable, and when they are seeking answers to profound questions.

For instance, can a man who died shortly before his wedding have his sperm harvested by his fiancée so that she can have his child? Should a physician amputate a limb from a patient who requests it, even though there’s nothing physically wrong with the appendage?

When I picked up Who Says You’re Dead?, I first read the brief sections covering topics that interested me and which I, too, have dealt with professionally: torture; when the president has a secret; a physician with a dark past; patients who refuse C-sections; and parents who want to engineer disability into their unborn child.

Take the first of those: Should a physician treat a detainee who is being tortured? On one hand, argues Appel, if “informed that such an interrogation will take place with or without the doctor’s presence,” then helping is helping. On the other, “The physician is rendering assistance that might permit the torture to continue.”

And what happens when a bikini model refuses a Caesarean because “no baby is worth a scar,” but the procedure is needed for the infant or mother’s safety? Appel weighs the pros and cons of both types of birth, but ultimately concludes that the right to refuse surgery is uncircumscribed. That is, a surgeon should never put a knife to a belly without consent. (He does point out, however, that some states “have upheld the need for forced C-sections while other states have proven unwilling to do so.”)

This enjoyable, informative book is a departure from Appel’s usual oeuvre, which includes the novel The Mask of Sanity, about a sociopathic doctor, and five books of short stories. Each essay here succeeds at answering its own framing question and shares current thinking on the matter under investigation.

After seeking out the most personally resonant sections, I went back and read Who Says You’re Dead? from start to finish. Instead of seeing just an interesting collection of stories — on topics ranging from the vaccine debate to end-of-life issues — I began to notice the ethical outline of our society today.

The book covers the core curriculum of medical ethics in a way that doesn’t scream “medical textbook.” Instead, it reveals the deft hand of a storyteller sharing how society has agreed to tackle those complex problems that have no clear or obvious answers.