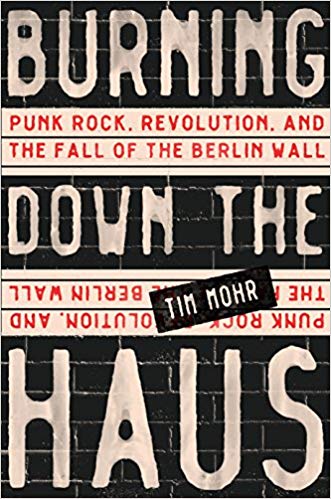 For people over 55, the Berlin Wall loomed in our imaginations beyond its mere physical size. It was an ugly and threatening scar on Berlin’s landscape that symbolized the Cold War, and was meant to keep the West out as much as to keep the citizens of East Berlin in.

Hundreds of books have been written about the Wall and the fall of communism, but until now, none have approached it from the perspective of the grassroots revolution spearheaded by East Germany’s Ostpunks (East punks). Author Tim Mohr has written an at-times frustrating, but ultimately fascinating account of this revolution.

Mohr arrived in East Berlin in 1992, three years after the Wall fell, so he was not a witness to the events he documents in Burning Down the Haus (the title is an allusion to the Talking Heads’ “Burning Down the House”). He became fascinated with the stories of the Ostpunks and their role in bringing down the dictatorship. He heard these firsthand accounts working as a deejay in Berlin’s clubs, where he met some of the survivors from the scene of a decade before.

The Wall may have been able to greatly reduce the number of East Berliners fleeing into West Berlin, but it wasn’t able to stop Western cultural influences conveyed via movies, books, magazines, and music from flowing into the East. Perhaps none of this cultural contraband was ultimately as consequential as the punk rock that came blasting out of the U.K. in 1976, led by the Sex Pistols, whose first single was significantly titled “Anarchy in the U.K.”

In the United Kingdom, punk was birthed, in part, in response to the economic conditions prevailing at the time, especially the high youth unemployment. Many of Britain’s youth saw no future (another Sex Pistols’ title) for them in Britain.

Punk was a loud and angry rejection of society, including the preceding generation of rockers (“No more Elvis, Beatles or Rolling Stones” sang the Clash). Hundreds of bands were formed by teenagers with little or no musical training, and dozens of independent labels were formed to capture and release their music.

In contrast, in the East, punk was a reaction to too much future. The State plotted and directed your life from the cradle to the grave. The Ostpunks rejected that oppression and opted for anarchy instead. Consequently, Eastern punk had much more of a political edge to it than its Western cousin. It took the title of that Pistols single to heart. The Ostpunks wanted to direct their own lives in their own way.

Punk music, with its loud, buzz-saw guitars and thrashing drums and bass, and its accompanying fashion of mohawks, piercings, and ripped clothing, offered the perfect outlet for their frustrations and desires. Punk was a vehicle to express — sometimes slyly, sometimes blatantly — opposition to the dictatorship. They wanted to be heard and seen. The Stasi — the East German secret police — accepted the challenge.

Following their anarchist principals, there was no leader of the Ostpunks or the movement they inspired. Rather, it was “revolution from below.” By the early 1980s, a small but growing number of disaffected East Berlin youth heard in Western punk a way to express their individuality and frustration with the oppression of the dictatorship of Erich Honecker. They began to discover one another in small groups meeting in one of East Berlin’s parks.

Among the two dozen Ostpunks that Mohr profiles in Burning Down the Haus are A-Micka, Jana, Mila, Otze, Panow, Chaos, and Kaiser — all self-adopted pseudonyms to confuse the Stasi. Many of them formed bands that performed original songs promoting anarchy and dissatisfaction with their repression.

Such simple protests made them enemies of the state and many of them were arrested, beaten, and sentenced to lengthy prison terms. Some were expatriated to West Berlin. This last was not the godsend that many of us would presume it to be. The Ostpunks wanted to change their society, not leave it.

The Ostpunks were not welcomed by the majority of the East Germans. The Stasi had thousands of informers, even among the Ostpunks — as many band members were informants. Their only allies initially were progressive pastors in the Lutheran Church, which granted a great deal of autonomy to its pastors. Some of them were sympathetic to the Ostpunks despite their apathy or even hostility to religion.

Gradually, the movement grew, and, by the late 1980s, the brutal attempts by the Stasi to suppress the Ostpunks generated increasing mass support of their aims. In the fall of 1989, this led to increasingly large public demonstrations that eventually led to the collapse of the dictatorship and the destruction of the Wall.

In the final chapters, Mohr explains that the anarchic spirit of the Ostpunks survives in Berlin via collective housing and arts communities. Many of the original wave of Ostpunks are dead or have moved on, but a few are still active.

Burning Down the Haus is frustrating in that its story is fractured and disjointed as it follows the paths of more than two dozen central characters, jumping back and forth between their stories in a series of short chapters. It is sometimes difficult for the reader to follow so many threads, especially with the multitude of punk pseudonyms adopted, for sound reasons, by the activists.

But ultimately it is a rewarding read that documents the courage of a small group of like-minded people to change an oppressive government with little more than music and dogged commitment to an ideal.