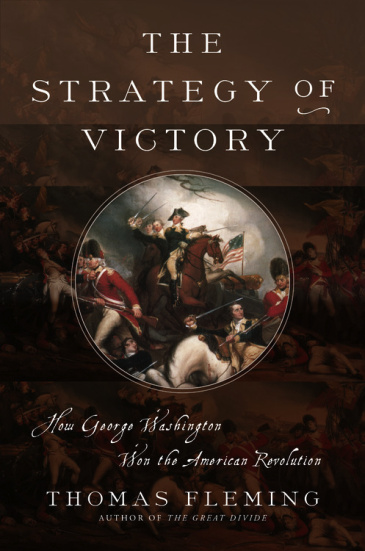 Thomas Fleming, who died last July after celebrating his 90th birthday, was the kind of writer who made other writers feel lazy and shiftless. His first book of history appeared in 1963. Since then, he published 24 novels, 25 history books for adults, and nine history books for children, and edited four more. That’s 62 books, and let’s not even start on his magazine articles.

The Strategy of Victory: How George Washington Won the American Revolution, seems likely to be Fleming’s last book, though we should probably be cautious about such a pronouncement about a writer so prolific. This volume, composed near the end of his ninth decade, is a fitting capstone to a remarkable career.

Fired by Fleming’s passion for the soldiers who struggled to an unlikely victory in the Revolutionary War, it is an idiosyncratic treatment which celebrates certain key events while passing over others with a quick wave of the pen. Yet it offers great pleasures.

The book proclaims the thesis that General Washington developed the essential strategy to win the war (i) by holding the Continental Army together, fighting only enough to goad the British into errors, and (ii) by developing that Continental Army into a core professional fighting force that could cover for unreliable state militias, who never could be counted on to “look the enemy in the face.”

Fleming doesn’t develop the thesis with particular care, and it’s slightly odd that the general who seemed to follow the strategy best was not Washington (who always ached for a slam-bang final battle with the British), but his protégé, Nathanael Greene, who utterly thwarted the enemy in the key Southern campaign in 1780 and 1781 while never winning even a skirmish. It was Greene’s work that drove the British into the mistakes that resulted in the capitulation at Yorktown in September 1781. In fact, Washington disappears from the narrative for significant portions of the story.

But it’s no matter. Fleming’s prose shines when he’s got a tale to tell about fighting and sacrifice by men in frayed and tattered clothes who were rarely paid and usually hungry. He summons us to gather round while he spins his yarns with verve. We join him to cringe over the Continental Army’s blunders at the Battle of New York in 1776 and boil with frustration over the missed opportunities at Monmouth in 1778.

With a sense of wonder, we ride a rollercoaster of emotions through the British invasion of New Jersey in June 1780, with bloody battles at Springfield and Connecticut Farms, where unsung regulars and militia staved off a powerful offensive that could have ended both the war and American dreams of independence. Why, you may ask yourself while reading this section, haven’t I heard of this pivotal episode before? Thank Mr. Fleming.

But there’s no time to linger in New Jersey. We’re off to South Carolina, where Fleming shows us the American camp on the eve of the Battle of Cowpens in January 1781. General Daniel Morgan, who liked to be called “the Old Wagoner,” drags his arthritic body from campfire to campfire, explaining his battle strategy to mismatched groups of amateur soldiers to be sure they will do their part when they face British guns and bayonets in the morning. That they do and defeat the most aggressive and effective British general, Banastre Tarleton, makes Fleming proud.

Indeed, Fleming expresses his feelings about his story through a quotation he features from Colonel John Laurens of the Continental Army: “I cherish those dear ragged Continentals, whose patience will be the admiration of future ages.”

Readers of The Strategy of Victory will, too.

David O. Stewart is author of The Summer of 1787: The Men Who Invented the Constitution and Madison’s Gift: Five Partnerships that Built America. He is working on a study of George Washington’s political mastery.