The Marshall Plan: Dawn of the Cold War 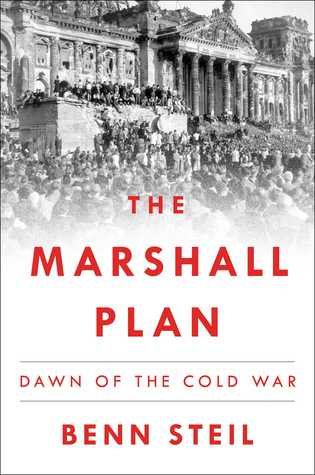 Much like Kleenex and Xerox, the term “Marshall Plan” has taken on a generic meaning in our lexicon. Today, we think of using a Marshall Plan to bolster any ailing nation’s economy and to bring it into the democratic capitalist fold.

As author Benn Steil explains in The Marshall Plan: Dawn of the Cold War, the original plan — with its $13 billion aid package — used in Post-WWII Europe had far-reaching geopolitical implications given the unique circumstances surrounding its development.

The goals of the Marshall Plan (officially the Foreign Assistance Act of 1948 or the European Recovery Program [ERP]) were to assist post-war Europe, foster economic recovery, combat the rise of Communism, and improve trade for all involved.

The Allies, especially Russia, had concerns about granting such generosity to Germany. After losing 20 million people to the Germans, Russia was in no mood to help its former enemy. France, England, and many in the U.S. felt the same. Still, men like Secretary of State Dean Acheson; Republican senator Arthur H. Vandenberg, chairman of the Senate Committee on Foreign Relations; and President Harry Truman believed it was necessary to rehabilitate all of Europe, including the former Third Reich.

These men were all too familiar with the disastrous WWI Treaty of Versailles, in which the victorious countries demanded reparations from — and that additional punishment be meted out to — Germany. The result was chaos. Ultimately, that “peace” treaty planted the seeds for the Second World War. Now, after WWII, the Allies were again seeking reparations and the prevention of German re-industrialization.

While it was Roosevelt, Stalin, and Churchill who had planned the war and its aftermath, it was Harry Truman’s fate to ultimately lead the post-war United States. Abandoning FDR’s “One World” vision, Truman and his new secretary of state, George C. Marshall, adopted an adversarial “Two World” vision, a high-stakes duel to contain Communism.

Internecine political fights broke out in the U.S. over the proposed massive aid bill. Truman wanted a strong German economy and encouraged the ERP to focus on that. Unfortunately, his secretary of the Treasury, Henry Morgenthau, and many other politicians advocated for the emasculation of Germany.

Powerful Senator Vandenberg was in Truman’s corner and became the most important political figure to shepherd the bill through Congress. Acheson, supported by his brilliant colleagues George Kennan and William Clayton, was a staunch supporter. General Lucius D. Clay, the military governor of Germany, also advocated for the plan to include Germany. He knew that Germany’s industrial recovery was critical to the post-war world and to the European and American economies.

After the war, Germany had been divided into four zones administered by the United States, England, France, and Russia. Berlin was located completely within the Russian zone. (It had been the Russians who first reached the capital city at the end of Hitler’s reign.) This gave them substantial leverage over the Allies.

As the aid package was being debated, the Russian bloc avoided participating in the process. However, during a crisis involving East and West Berlin currency, Stalin took bold action. He suddenly cut off all access to Berlin by train, canal, or highway. The result was the Berlin Blockade, which began a siege of West Berlin that lasted from June 1948 until May 1949.

In response, thousands of Allied planes began flying supplies into Berlin. Over the course of a year, more than 2.3 million tons of goods were brought in for civilians. Eventually, the Russians relented and ended the blockade, a devastating public defeat. The collateral damage included greater tension between East and West, exposing the need for (and resulting in the creation of) NATO in 1949.

Author Steil is the senior fellow and director of international economics at the Council on Foreign Relations. His book — which features extensive endnotes, appendices, and statistics — offers a detailed history and analysis of the persons and events that shaped the Marshall Plan.

While the topic is dramatic, the details sometimes trip over themselves. The result is an important, scholarly text that may pose a challenge to lay readers. Still, the author skillfully presents the gestation of the multifaceted stimulus package that threw down the gauntlet to the Communists. It remains unclear whether the Marshall Plan caused the Cold War, but it surely was a contributing factor.

Can our country’s dark past teach us anything about its dark present?