Wherever the Sound Takes You: Heroics and Heartbreak in Music Making

A harmonious celebration of the passionate folks who write, play, and/or sing the songs. 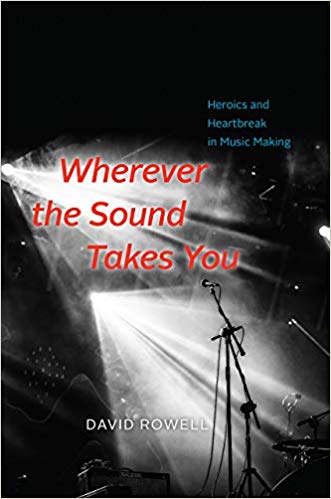 Rowell, deputy editor of the Washington Post Magazine, like many among the rock ‘n’ roll generation, became enthralled with the music in his teens. Also like many, there was a friend who introduced him to the magic of three amplified chords and a steady beat. In Rowell’s case, it was Bob Funck, who had access to an older sister’s record collection. Rowell came of age during the 1970s, and his first and lasting love was progressive rock, especially the music of Yes.

Unlike for many of his contemporaries, however, his passion for music did not wane as adult responsibilities piled up over the years. I can empathize; neither did mine. My guide along this path was my older brother. We came of age a few years before Rowell, so our passion was and remains early rock ‘n’ roll and the classics of the 1960s, especially the Beatles, Bob Dylan, and the Rolling Stones. As I write this, I have my headphones firmly clamped on and am surrounded by my collection of over 10,000 LPs, CDs, and 45s.

In engaging essays about mostly obscure musicians — amateur and professional — Rowell explores why some people are driven to make music even if few will ever hear it. It is who they are; it is what they do. They could no more stop playing than stop breathing.

Six of the eight lengthy chapters in Wherever the Sound Takes You profile musicians that most people will have never heard of — in most cases, probably deservedly so. Yet somewhat oddly, considering his primary focus on unknowns, Rowell includes two acts — Peter Frampton and Yes — that were tremendously popular in their day but who have since fallen out of the pop conscience, yet continue to record and tour. I suspect they’re here because they are among his personal favorites.

The first chapter, “In Switzerland Nothing Is Easy,” is an excellent example of Rowell’s dedication to exploring little-known musical alleys. A drummer himself, Rowell became intrigued by an unusual percussion instrument called a hang (pronounced hong) after viewing a demonstration of it on YouTube. His quest to learn more about it took him to Switzerland, where the instrument’s inventors — Felix Rohner and Sabrina Schärer — live.

While Rowell never meets Felix, who views the hang as almost mystical and has become reclusive, he does connect with Andreas Gerber, who owns several hangs purchased from Felix. Rowell spends a joyous afternoon playing the hang with Andreas, thereby “curing” himself of the hang virus.

At the other end of the musical spectrum is the chapter “Into the Darkness,” which explores the disturbing genre of death metal, or grindcore, a mash-up of heavy metal and punk that eschews melody, harmony, and any other familiar aspect of music in favor of growling, snarling vocals and rapid-fire, ear-splitting volume. As Rowell writes, “I was as far away from Yes music — its harmonic uplift, the structural complexity, its lyrical hope and optimism — as it was possible to be.”

Rowell focuses on the band Pig Destroyer, a Washington, DC-area grindcore band, as they prepare for a performance at Deathfest — the annual grindcore festival in Baltimore. When Rowell meets the band, he learns they’ve been together for more than a decade, gigging on the weekends (the members have day jobs and don’t like to tour) and periodically releasing albums on small, independent labels.

Despite their aggressive and loud music, Rowell discovers that the members of Pig Destroyer are fairly normal — they simply enjoy releasing their darker emotions through this extreme, nihilistic music.

The most personal and heartfelt chapter is “Two for the Show,” in which Rowell recounts accompanying his friend Bob (the one from adolescence) on his small-time tour of East Coast clubs. Bob has limited skills as a musician and singer, but he has passion and commitment.

At stop after stop, there is little appreciation for Bob’s music. Often, there are only a handful of uninterested patrons or none at all. And, yet, Bob gets better with each performance and catches the ear of one or two club owners who want to book him again. Getting to play his music in front of an audience, no matter how small, is all that Bob needs.

Rowell’s quirkiest profile subjects have to be Bill Allen, self-proclaimed owner of one of the world’s largest drum sets, and the North Suburban Hammond Organ Society. Allen seldom plays out anywhere; instead, his kit is set up in a suburban storage unit, where he happily bashes away.

The mostly elderly members of the North Suburban Hammond Organ Society keep the flame burning with monthly recitals on what was once a common instrument in suburban homes. The Hammond model B3 (popularized on Booker T & the M.G.’s “Green Onions” and many other garage-band hits) remains popular among rock bands.

Musician may be the world’s second-oldest profession. One can imagine our ancient ancestors picking up two pieces of stone and smacking them together to obtain a fine cutting edge, only to realize that the rhythm they produced was pleasing to the ear and the soul. In Wherever the Sound Takes You, David Rowell does a superb job of reminding us of this universal and basic truth.

Riding to Arms: A History of Horsemanship and Mounted Warfare

An homage to the mighty steed and the works inspired by it.