George Soros: A Life in Full

An uneven look at an extraordinary man. 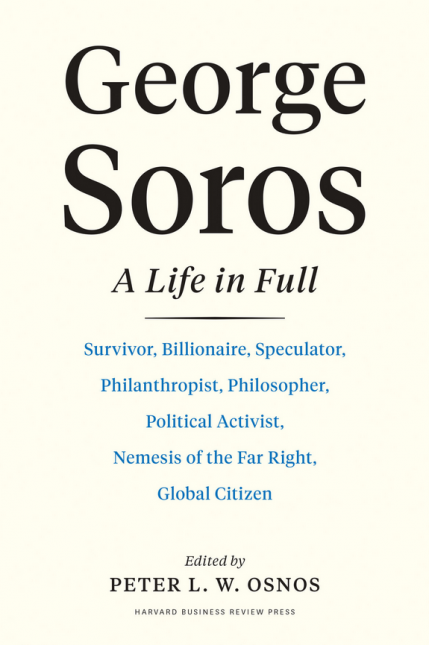 George Soros, now 91, cites 1944 as the best year of his life. He was 14 years old, living as a non-practicing Jew under the Nazis in Hungary, and hiding in various places throughout Budapest. His adored father had changed the family name from Schwartz to Soros, and moving from house to house, young George learned to cope with danger and live with risk.

These early life lessons, plus an education at the London School of Economics, catapulted Soros into immense personal wealth as a financial analyst. Fluency in French, German, Hungarian, and English helped him master the international markets in which he accrued that wealth. His Quantum Fund — which made $5.5 billion in 2013 — became the most successful hedge fund in history. Yet, at the age of 49, Soros decided to stop making money and start giving it away instead. In 1979, he founded his Open Society Foundation and began rewriting the definition of global philanthropy. In doing so, he changed the world.

Ascending into the philanthropic strata of billionaires, Soros soon surpassed the largesse of Andrew Carnegie, John D. Rockefeller, Andrew Mellon, and even Bill and Melinda Gates, giving an estimated $35 billion to open up previously closed communist societies across Eastern Europe and the Soviet Union.

It’s fascinating to read Peter L.W. Osnos’ George Soros: A Life in Full in 2022, as Vladimir Putin plunders Ukraine, and to realize how prescient Soros was in 1989 to foster openness in those former autocracies. Along with education for all, “We…need a market economy that protects minorities and we need the rule of law,” Soros has said. His foundation — which began by bankrolling a $100 million project to revive preschool education over five years — seeks to help our imperfect world achieve those very things.

Of course, closed societies don’t often enjoy being pried open, and Soros’ efforts were detested in nations where despots ruled and corruption festered, such as Angola, Suharto’s Indonesia, Peru, Zimbabwe, Malaysia, and Russia. In the past, Soros has also challenged Israel’s “racist and anti-democratic policies” and questioned whether that country is “really a democracy.” His support for progressive and liberal causes continues to make him a target of the political right, which demonizes him via anti-Semitic conspiracy theories.

In 1997, after endowing Central European University in Hungary with $880 million, Soros decided to bring his Open Society Foundation to the U.S. He began in Baltimore, where he instituted fellowship programs, community development initiatives, work development programs, and job markets. Today, his foundation funds more than $250 million a year in programs and grants across the country, but Baltimore remains the flagship of his American success.

To capture Soros’ life, editor Osnos employs an interesting subgenre of biography by assigning eight writers who’ve known the man at various stages in his life to present their impressions of this survivor, philanthropist, activist, global citizen, and all-around scourge of the far right. Osnos, who founded the publishing house PublicAffairs, explored the technique in 2000 when he assigned three journalists to write a book on Putin’s ascendance to the presidency of Russia.

Now, presumably, Osnos’ goal is to make the George Soros diamond sparkle in all its facets. Unfortunately, the editor fails to edit. Perhaps he’s reluctant because he’s self-publishing this book with his wife and states that the project “has been funded by a private equity that is backed by Soros’ wealth…That money will be repaid from revenues the book accrues.” Osnos arranged to distribute the book through Harvard Business Review Press “to assure the broadest possible reach for the book in the world marketplace.”

Some chapters overlap, duplicate information, meander off subject, and layer the reader with lengthy opinions. Sebastian Mallaby’s chapter, “The Financier,” is best read by those holding a degree in economics, while Orville Schell’s “A Network of Networks” presents a mouth-watering account of “some of the most brilliant, accomplished and engaged people on the planet” invited for luxurious weekends at Chateau Soros, described as akin to “being summoned to the court of Louis XIV.”

The book’s best chapter by far is “Philanthropy with a Vision” by Darren Walker, president of the Ford Foundation, whom Osnos introduces as “a black man and proudly gay.” Consequently, readers might expect to find something in Walker’s essay pertaining to his race and/or sexual identity. Here, the editor really ought to have edited himself because nothing in Walker’s cogent and erudite chapter reflects anything about either, only his shining admiration for a philanthropist dedicated to leaving the world a better place than he found it so many decades ago.

Thank you, Darren Walker, and God bless you, George Soros.