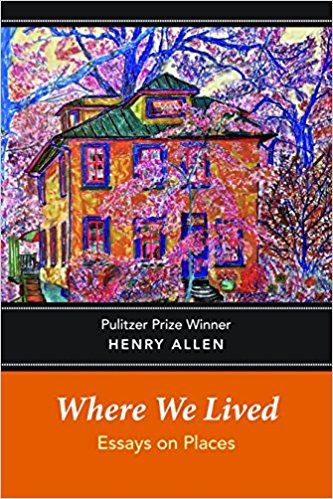 If this is a book for you, Henry Allen’s voice will engage you on the first page, where he writes, “In the early 1950s, my grandfather, Harry Allen, sold the family house in Orange, N.J. It was the sensible thing to do.”

He explains that the time had come to sell it, and that his family’s feeling about the house was, “a case of Olympian wistfulness, and the old truth that we have to change or pay more to stay the same.” It was, after all, “just an old house in an exhausted city in New Jersey.”

On the other hand, if you’re looking for something with a plot, an architectural or sociological treatise, or even a conventional memoir, you might want to pull another title off the shelf.

Allen writes about the places his family lived, beginning in Wales in 1557. His Welsh ancestor immigrated to New England in 1638, and the rest of his ancestors were Anglo-Saxon stock, all in the United States before it became the United States. Several of them gained impressive fortunes in those early days from such sources as slave-trading, gun-running, and piracy. After a few generations, he writes, his ancestors considered their fortunes to be a sign of God’s grace, “with entitlements rather than achievements, privileges instead of obligations.”

So, of course, the money seeped away. The generations preceding the author lived lives of the minor gentry, a sort of threadbare gentility. The men worked mostly in the financial industry or in sales, but don’t seem to have had the kind of drive necessary to build fortunes. Sometimes they had summer houses, and one or two servants, but they did not live in luxury.

Allen sketches the homes, from Wales to New Jersey, from the Navy ship his father served on to houses in the Maryland suburbs of Washington, DC; the people who lived in them; and even some of the furniture they had, often in a deft sentence or two. His grandmother “had a hyper-genteel way of flicking cigarette ashes — she’d lay the cigarette inside the ash tray and roll it till the ash fell off.”

They didn’t know their grandfather had a mistress, he writes, until after his death, when they discovered the canceled checks. Summer houses are “the last WASP outposts of johnny-cake breakfasts and cold-water plunges; houses that were built as desperate 19th century attempts to hold onto strengths and virtues that only remain now in the attic as ghosts hovering over old oars.” His description of hitting a home run in a softball game is as exhilarating to read as it must have been to hit.

And then there’s the drinking. He devotes a chapter to it, writing, “WASPS are frequently the butts of booze jokes (Whiskypalians) and prompters of phrases such as ‘functional alcoholism as a way of life.’” He recalls days built around the evening ritual of cocktails, and the attitude that “[D]rinking was not just an entitlement, it was an obligation.” He deals unsparingly, but not at great length, with his own recovery from alcohol addiction.

Allen was a writer and editor for the Washington Post for 39 years. He won the Pulitzer Prize for Criticism in 2000, for “fresh and authoritative writing on photography.” The last chapter in Where We Lived is about Takoma Park, where he and his family have resided since 1977. People from the Washington area will recognize the quirkiness of the place he now calls home: “With a west wind, we had the heavenly smell of bread baking at the Giant bakery across the tracks. (A local environmentalist complained it was air pollution.)”

In the foreword, Allen describes his book as “an oddity, the sort of thing you might find on a rainy day in a summer house.” It could also go on a bedside table to be savored one wry and engaging chapter at a time.

Susan Storer Clark is an occasional contributor to the Washington Independent Review of Books. Her historical novel, The Monk Woman’s Daughter, was published by Inkwater Press in July. She is a former radio and television journalist. She and her husband, Rich, live in the Seattle area, where they have remodeled an old farmhouse. Clark writes about history and historical fiction at www.historymuse.us, and she is at work on a second novel.

The Great Surge: The Ascent of the Developing World

How the lives of the poor have improved in the last half-century — and how that progress can continue.