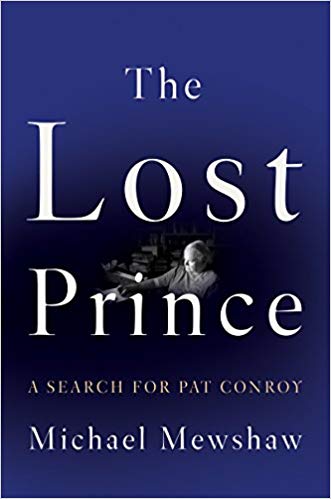 Pat Conroy had many admirers, and for good reason. Gore Vidal said of him: “He’s tapped into a truth the rest of us never knew ran so deep.” His books sold in the millions, and many became blockbuster movies. He knew what the masses wanted in their stories and elevated the public’s fascination with his celebrity through his memoirs and self-described “largely autobiographical novels.”

From 1981-1994, Conroy enjoyed a close friendship with fellow author Michael Mewshaw — so close that they favorably depicted each other as characters in their books. Their families also became close while they lived near each other in Italy for many of those years, and, after returning to the States, they stayed in frequent contact.

In 1994, for initially undeclared reasons, Conroy abandoned the friendship, and though he and Mewshaw later semi-reconciled through email correspondence, they never saw each other again during the last 22 years of Conroy’s life, up to his death in 2016.

Mewshaw has now written a compelling, transparent account of their 35-year relationship in The Lost Prince: A Search for Pat Conroy. The historical record of their friendship makes it clear that for more than a decade, the two authors were absolutely joined at the hip as writing soulmates, often comparing notes of their similar tortured upbringings while suffering the slings and arrows of lives spent supporting their families while pursuing publication and mass-quantity purchases of their work product:

While Conroy’s career took off during those 14 years as he holed out one bestseller after another, Mewshaw’s books usually landed on the lip of the cup. To counterbalance these professional highs and lows, Conroy’s marriage to his wife, Lenore, and relationship with his children became, in time, estranged and finally broken, in large part because of his perpetual sense of outrage over Lenore’s never-ending court battles with her first husband over alimony issues. Meanwhile, Mewshaw survived his setbacks thanks to a strong marriage and stable home life with his sons.

The Lost Prince provides an often rollicking account of Conroy’s larger-than-life personality — always quick on the retort, self-deprecating, irresponsibly free spending, and using the same piercing language in conversation as his cutting-edge words on the page.

After Conroy’s death, Mewshaw did an investigation attempting to better understand his late friend’s disconnect. He gained access to the author’s papers housed at the University of South Carolina and also came across records and correspondence from Lenore’s court battles with her first husband. In addition, he located pertinent medical records and credible articles on the key people in Conroy’s life, as well as speaking with some of them himself.

When he completed his research, lo and behold, Mewshaw realized that much of what Conroy had always claimed to be true in his memoirs and conversations was, in fact, a materially twisted and sometimes downright false version of actual events.

Thus, the sympathy felt by readers and friends for the famously disturbed author’s interpersonal pitfalls and struggles may well have been unwarranted since many of the sad tales Conroy depicted in his books and discussed in person were nothing more than the product of his deeply flawed perceptions and fertile imagination.

This circumstance brings to mind what my college creative writing professor said to our class over 40 years ago in an effort to goad us into weaning ourselves from our life experiences that usually provided the seeds for our short stories. His instruction to us wannabe novelists was, “Don’t let the truth stand in the way of producing good fiction. If the truth isn’t interesting enough, then lie.”

Thanks to Mewshaw, we now know that Conroy spent a lifetime following my teacher’s instruction. He knew the facts of his own life weren’t quite interesting or appealing enough to provide something spellbinding or admirable in either his memoirs or spoken accounts, so to endear himself to his readers and explain his unhinged rants to those around him, he played fast and loose with his facts.

As an example of his bona fide duplicity, Conroy gave this justification after publishing a scathing account of Lenore (long after their divorce) in spite of a promise he made to daughter Susannah never to write again of their troubled marriage: “If Susannah doesn’t like the book — too bad — because I don’t think I’ve lied too much.”

Despite Mewshaw’s having gained a final, clear awareness of his late friend’s misbehavior, while still holding onto his grief over the fracture in their relationship (caused by Conroy’s misperception that Mewshaw and his wife had chosen to align themselves with Lenore in their divorce), somehow, some way, Mewshaw manages to end the book in a mode of not just forgiveness, but glowing praise for Conroy, comparing his feelings to those of Norman Mailer in his eulogy to Ernest Hemingway:

“The truth of [Hemingway’s] long odyssey is that…his inner landscape was a nightmare, and he spent his nights wrestling with the gods. It may even be that the final judgment on his work may come to the notion that what he failed to do was tragic, but what he accomplished was heroic, for it is possible he carried a weight of anxiety within him from day to day which would have suffocated any man smaller than himself.”

With that conclusion, The Lost Prince provides an exquisite, deeply moving portrait of one man’s accepting the very good and the very bad in a treasured friend who did him wrong, and favorably judges Pat Conroy with a large measure of grace.

Michael Mewshaw’s complicated history with his brilliant but exasperating compadre finally brought him to the same place most of Conroy’s loyal readers landed: Believing that his words rang true regardless of the falsehoods in his life.

Talmage Boston is a historian and lawyer in Dallas whose most recent book is Cross-Examining History: A Lawyer Gets Answers From the Experts About Our Presidents (Bright Sky Press, 2016).