A House without Windows: A Novel

A young lawyer searches for the truth behind an Afghan woman’s murder conviction. 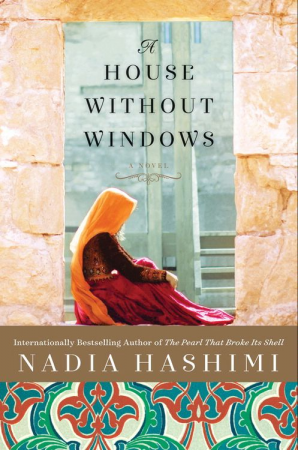 In the bloody aftermath of a murder, a young wife, Zeba, is found in the courtyard of her village home with a hatchet in her hand and her husband’s mutilated corpse nearby. Three of her four young children and neighbors find her covered in blood. This catastrophic event becomes the base on which the whole novel builds, working both backward in time to reveal Zeba’s story, and forward to unravel how Yusuf, her lawyer, attempts to fight for her in a country reluctant to listen to a woman.

To understand the characters of this work, one needs only to understand these words: “Sometimes if you don’t lose your mind a little bit, there’s no way to survive.”

To boil this novel down to its essence, A House Without Windows, the third fiction project from Afghan-American Nadia Hashimi, is about different forms of madness (that of humanity in general, and of individuals in particular) and how one must navigate within those realms of insanity.

While the novel brings a slew of characters to life with impressive skill, the two anchors are Zeba and Yusuf. Having lived in Afghanistan as a child, Yusuf becomes a lawyer in America. His desire to make a change, to accomplish something real in the world, however, draws him back to his birthplace.

Upon his return to Afghanistan, his first case is Zeba’s, and it seems cut and dry. He works diligently, despite the obstacles placed in his path, to discover why a seemingly average woman, a caring mother who is well-liked by neighbors, would suddenly take a hatchet to her husband’s head.

That is assuming she did commit the crime for which she is convicted. As Yusuf slowly begins to the learn the truth, his struggles become a synecdoche for the struggles Afghan women face on a daily basis, their voices silenced against the injustice that the legal system, the country, and men rain down upon them on a daily basis.

One of Zeba’s couplets, the creating of which is a hobby she uses to stay sane and pass the time before and after she is imprisoned, sums up the central dilemma of this novel: “What good is a woman’s telling of the truth/When nothing she says will be taken as proof?” The system is broken, every character in the novel knows it, but no one, not even Yusuf, can seem to figure out how to break this cycle of continual injustice.

Zeba’s time at the prison, Chil Mahtab, exposes her to other women, many of whom are incarcerated for acts of self-defense: lashing out at husbands who beat them, stabbed them, and sold them into prostitution, not to mention a slew of other heinous acts the women are exposed to.

In this sense, the novel doesn’t really focus on whether Zeba committed the murder, because her guilt or innocence is beside the point. She is a woman, people believe she did it, and that’s all that matters. Zeba and her case become a metaphor for every case, every woman facing punishment for an act she did not commit, or for one committed as a last resort. The reasons are lost, forgotten, or simply don’t matter in a country where a woman’s testimony holds half the weight of a man’s — a fact, ironically, mentioned by one of the judges.

This may explain why the novel provides barely veiled clues toward the very beginning that allow intelligent readers to quickly surmise the truth of that fateful day. In fact, when the truth is revealed, it comes as no surprise, delivers no ripples of shock to the reader.

The struggles that lead to the murder and the obstacles thrown up after are far more essential to the story than the crime. The hurdles Yusuf and Zeba face as they try to save Zeba from hanging include patriarchy, honor, and a justice system that is attempting to correct its deficiencies but that can’t quite manage it in a country swaddled in oppression.

This book isn’t a murder mystery; it’s a political commentary on Afghanistan’s culture and legal system. In that aspect, this novel accomplishes its goal and should not be overlooked as mere fiction; it’s far more powerful than just a story of one convicted woman.

Hashimi’s work urges readers to be like Yusuf, to fight even when we know that the changes we affect may only be ripples in a pond. A Dari song is repeated over and over: “Tonight, you will listen to the sorrows of my soul…though tomorrow, you will forget all that has been told.”

This, perhaps, is this novel’s greatest endeavor: When you finish this book, do not forget what you’ve read. Do something.

Fatima Azam is working on her Ph.D. in comparative literature at the University of Maryland while also teaching writing and literature. She resides in Maryland, where she is working on her fifth novel. She loves words almost as much as chocolate pastries.