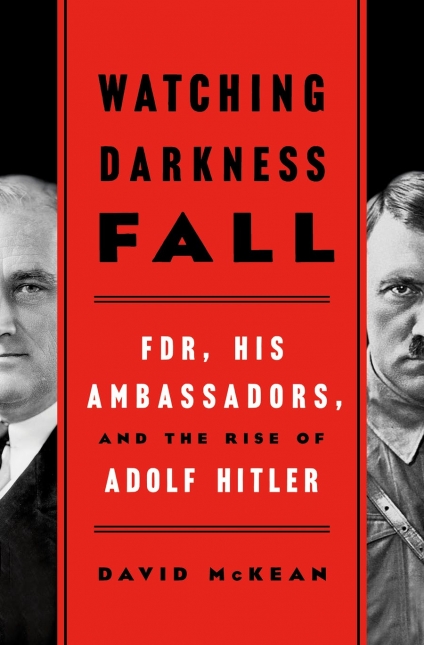 Watching Darkness Fall focuses on the diplomatic run-up to World War II in the 1930s. Meticulous, gripping, and steeped in palpable authenticity, David McKean’s saga zeroes in on a segment of the story not often covered in detail: the activities of four U.S. ambassadors in key European capitals, including the notable hot spots of Berlin, Paris, and Moscow.

McKean’s book gives us an engaging picture of diplomatic Washington’s reaction — or absence thereof — in the face of Hitler’s calculating maneuvers with Mussolini in Italy and Stalin in the Soviet Union, of the Führer’s fulminations against German Jews, and ultimately with his aggressive territorial strikes on Austria, Czechoslovakia, Poland, and France.

McKean takes up the tale around 1933 and closes with the Japanese attack on Pearl Harbor, all the while pushing the saga forward with verve and gusto. The result: a fast-paced, deftly written, exhaustively researched tale that spools out like a month-by-month recounting of the public activities and inner lives of each of his ambassadors. McKean draws liberally on diplomatic cables, private letters to the president, news reports, and memoirs and diary entries, crafting full-bodied portrayals not just of his diplomats but of FDR and his circle as well.

The ambassadors, save one or two, are probably not familiar figures: Breckinridge Long (Italy, appointed in 1933), William E. Dodd (Germany, 1933), William Bullitt (Soviet Union, 1933, and then France in 1936), and Joseph P. Kennedy (Great Britain, 1938). Bullitt and Long were scions of wealth, and Dodd a lifelong academic. Kennedy was something of an odd duck in the group, a brash, self-made millionaire, Irish Catholic, and father of a future president.

Only Dodd, a somewhat quirky ex-University of Chicago professor and committed Nazi hater, seemed to grasp the international threat represented by Hitler and his cronies. What’s more, Dodd thought little of the abilities of his fellow ambassadors Bullitt and Long, both of whom struck him as dumbly oblivious to the coming upheaval in Europe and what it meant for America.

Ambassador Dodd’s assessment of his colleagues was not off-base. Consider Long’s view on Hitler’s move to subjugate Austria: “[Hitler] desires an extension of German influence to the east and southeast, but that does not mean military or political control or domination or annexation.”

In fairness, it should be said that most of the diplomatic corps and even the general public were decidedly blasé about the looming threat from a new, rearmed Germany. Isolationist sentiment was widespread. Take national hero and avowed Nazi admirer Charles Lindbergh, who regularly anointed his isolationist cant with his special sauce of overt racism:

“If we enter fighting for democracy abroad, we may end up losing it at home… [It is…] not a question [of] banding together to defend the white race from invasion.”

But Joe Kennedy was perhaps the most vociferous proponent of appeasement among the ambassador corps. The bold self-promoter represented something of an affront to the patrician sensibilities of both the first family and the Department of State. Even the tolerant Eleanor Roosevelt found him gauche (“that awful Kennedy”). Still, to the political operatives around FDR, Kennedy’s Catholicism — not to mention his expansive clutch of smiling, Irish-eyed offspring — made him a domestic political asset, a putative key to securing a vital national voting bloc.

Kennedy’s ethnic and religious affiliations tickled the president. Despite FDR’s lack of personal enthusiasm for Kennedy, he thought it a grand joke to foist the outspoken ex-distiller (bootlegger?) — an Irishman and Catholic to boot — on the staid Court of St. James, a bastion of militant Anglicanism recently entangled in Ireland’s struggle for independence.

To call Kennedy an appeaser is certainly an understatement. In a private letter penned in the late 1930s, he wrote, “An unemployed man with a hungry family is the same fellow whether the swastika or some other flag floats over his head.”

The attack on Pearl Harbor, of course, upended attitudes like the senior Kennedy’s overnight. This tectonic shift, though, is beyond the scope of Watching Darkness Fall. Still, it’s intriguing to contemplate it in the response of Ambassador Kennedy’s second son to Soviet ships, missile-laden, steaming toward Cuba some two decades later.

[Editor's note: David McKean will speak at the Gaithersburg Book Festival on May 21st in Gaitherburg, MD.]