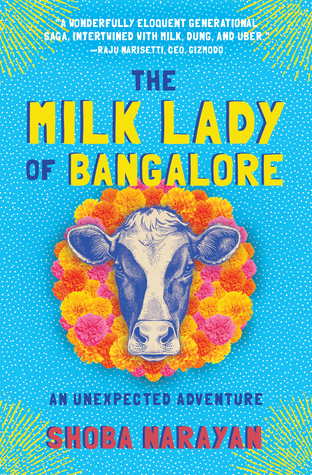 Shoba Narayan and her husband grew up in India but came of age in the United States. They understand and relate to both cultures but don’t feel they belong to either. After living in a posh area of New York City, they make the adventurous decision to return to their native India, giving their children the opportunity to learn more about Indian culture and to grow up knowing their Indian relatives.

After moving to a modern high-rise in Bangalore, Narayan is greeted on the elevator by a cow and its mistress riding up to an apartment as part of a christening ceremony for a tenant’s new home.

Although considered unusual in the modern world, cow dung and urine are believed to contain healing and protective elements, which are used to bless a new home. With a sudden desire to follow tradition, Narayan hires the cow and its mistress to bless her apartment.

(Bovine urine’s powers go beyond the metaphysical. Narayan later learns from a man at Dr. Jain’s Ayurvedic and Cow Urine Therapy that it “has antibacterial, antioxidant, anticancer, and antifungal qualities.” It also cleanses the blood and balances the body’s three doshas, or energies.)

In her high-rise, Narayan stands on her balcony and notices a woman across the street milking cows and selling the warm milk from a metal pot. She decides to investigate and forms an unusual relationship with Sarala, the milk lady.

Narayan soon embarks on an unexpected journey into the world of cows. Venerated in India, cows are believed to bestow goodness and health on those who accept their gifts. Although for modern Hindus the holiness of the cow poses a contradiction of both acknowledgment and embarrassment, Narayan nevertheless welcomes her journey to better understand and appreciate the many roles that cows play in modern India. She writes that “Indian poetry uses the cow as a metaphor to describe speed, fertility, maternal instincts and a nurturing benevolence.”

Sarala and her family represent the dichotomy of Indian society — the slums of the impoverished exist beside elegant high-rises. At first, Narayan cannot bring herself to serve her family fresh raw milk instead of the more acceptable homogenized variety, although she herself grew up drinking milk straight from the udder.

But Narayan is continually drawn to Sarala and her milking station across the street. They speak every day about life, cows, and milk. Sarala finally convinces Narayan to buy from her. According to the author, “The reason I want to buy milk from a cow is because I am trying to recapture the simple times of my childhood, particularly after the intricate dance that I have undertaken for the last twenty years as an immigrant in America. Milk is my way of reconnecting with the patch of earth that I call home.”

As their friendship grows, Sarala teaches Narayan about the importance of cows in Indian society and the protective properties believed to be not only in their milk, urine, and dung, but also bestowed by their very presence.

Sarala believes it is a calling to take care of cows; those who do have “cow fortune.” Urban dairy farmers allow Narayan to glimpse an immersive relationship with another species in their natural habitat for long periods of time without having to leave the city or even the neighborhood.

The next phase of the women’s friendship and Narayan’s journey takes place after the death of one of Sarala’s cows. Narayan loans money to Sarala for a new one and accompanies her and her son on numerous cow-shopping excursions. Narayan quickly learns that when it comes to purchasing a milk cow, you must use intuition.

According to their cow advisor, “The trick is to match the animal’s energy and temperament to yours.” Sarala agrees, saying, “You choose a cow based on its mood, what it looks like, what the day feels like, what you feel like, whether someone in your family has a fever or cold, whether the planets are properly aligned.” Narayan has discovered that finding a perfect cow involves what she terms “Synchronicity. Serendipity. Destiny.”

In The Milk Lady of Bangalore, Narayan artfully chronicles her adventures into the world of bovine divinity and shares what she’s learned about how cows are woven into the fabric of Hindu culture. This book will teach readers everything they’ve ever wanted to know about the importance of cows in Indian society.

And remember, as the author says, “The road to salvation is paved with warm milk.”

K.L. Romo writes about life on the fringe: teetering dangerously on the edge is more interesting than standing safely in the middle. She is passionate about women’s issues, loves noisy clocks and fuzzy blankets, but HATES the word normal. Her historical novel, Life Before, is about two women separated by a century who discover they’ve shared a soul. Find her on Twitter at @klromo.

Let Me Tell You What I Mean

In this new collection, the famed essayist demonstrates her longstanding mastery of the form.