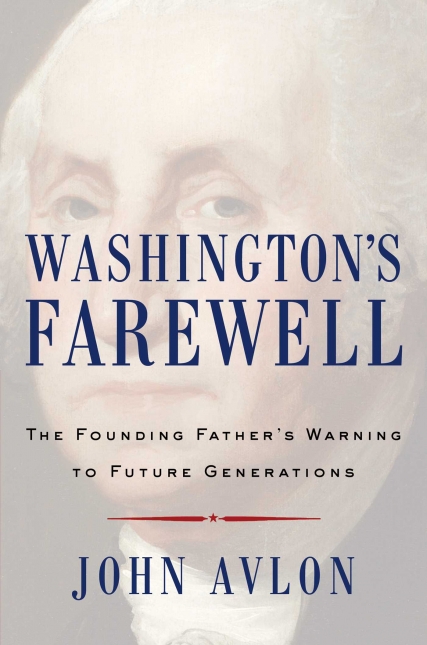 In the midst of our tumultuous political and social times, John Avlon offers an exacting account of one of the most important messages delivered to millions yet unborn: President George Washington’s Farewell Address, which by law must be read on the floor of the United States Senate every year.

Washington wasn’t known as a man of words in, say, the same way as Thomas Jefferson or Abraham Lincoln. And while his presidency was full of precedents, perhaps the greatest gift he gave the nation was his Farewell Address, which appeared at the end of his second term in the bipartisan Philadelphia publication American Daily Adviser.

The choice of an independent-minded journal was no accident. The nascent republic, like in our own times, was deeply divided along party lines; then between the Republicans, led by Thomas Jefferson and James Madison, and the Federalists, led by Alexander Hamilton.

If there was one thing that rankled Washington, it was what he termed “the spirit of party,” known at that time as factions. Interestingly, Washington would turn to the leadership of each party — Hamilton and Madison — to help him compose his address.

In our schools, the emphasis on Washington’s Farewell Address has mostly been relegated to its repudiation of entangling alliances with the powers of Europe. In fact, most teachers impart upon their students the beginning of American isolationism, marked with Washington’s address, and its termination, in 1898, when the United States went to war with Spain.

Avlon relates how Washington was exhausted by more than two decades of tireless public service, starting with his appointment as commander-in-chief of the Continental Army in 1775 and ending with his two terms as president of the United States (while in between presiding over the Constitutional Convention). By the time he wrote his address, he was more than ready to return to his “vines and fig trees” at Mount Vernon.

Without being paternalistic, Washington issued his farewell as a “warning from a parting friend.” By 1796, the nation was on the verge of being a failed state. Republicans and Federalists wrestled with each other over their conflicting visions of America.

Both sides loved the United States but had different agendas for its future. The squabbles over how to interpret the Constitution, which nations to support abroad, and whose interests to address spilled over into Washington’s cabinet, in which Jefferson, as head of the Republicans, served as secretary of state, and Hamilton, as head of the Federalists, served as secretary of the treasury.

Washington was caught in the middle of the sibling rivalry, and it did not sit well with him. Ironically, his tenure as president would outlast that of both Jefferson and Hamilton in their respective positions. As early as 1792, as the national rupture was becoming more apparent, Washington looked to retire, but Jefferson argued, “There will be a nation to hang on to if that nation can hang on you.”

Convinced, Washington served a second term that proved to be more fractious than the first. During his second term, he was viciously assaulted in the Republican press by writers hired by Jefferson, and came to learn of a letter written by Jefferson to his friend Philip Mazzei in which Jefferson, without mentioning Washington by name, wrote, “Men who were once Sampsons in the field and Solomons in the councils have had their heads shorn by the harlot of England.” Martha Washington never forgave Jefferson for his transgression.

Much of the rupture came to a head as the United States tried to steer a course of neutrality between England and France and their constant state of war. The Jeffersonians argued the U.S. was bound by its 1778 treaty with the French, who helped secure American independence, even though the French Revolution had devolved into the “reign of terror.” The Hamiltonians, meanwhile, supported England, the nation’s most important trading partner.

Washington, to the delight of the Federalists, supported a Neutrality Act, earning him the wrath of Republicans. Known for his temper, Washington exploded during a cabinet meeting when the secretary of war, Henry Knox, brought in a newspaper with a cartoon depicting Washington as a victim of the guillotine.

By 1796, he’d had enough, but before departing the public stage, Washington wanted to remind Americans of what was most important: unity among “citizens by birth or choice”; religious pluralism in all spheres of life; an educated citizenry; and a foreign policy rooted in independence. (Avlon is careful to avoid the term “isolation.”)

In addition to the driving prose that explains the drama behind Washington’s Farewell Address, Avlon takes a deep look at its legacy in American history, bringing into play the stories of how fellow officeholders, including Jefferson, Lincoln, Woodrow Wilson, Dwight Eisenhower, and Ronald Reagan, relied on Washington’s sage advice.

Avlon then challenges all Americans to carry on the task of Washington in these current troubling times and learn a thing or two from our Founding Father. This book belongs on the bookshelf of anyone who has a serious interest in American history and in the subsequent fate of our nation.

James A. Percoco is the teacher-in-residence for the Civil War Trust. He is author of Summers with Lincoln: Looking for the Man in the Monument (Fordham, 2008) and is a member of the national Teachers Hall of Fame, Class of 2011. He will moderate the "Words of War: Beyond the Battlefield" panel at this year's Washington Writers Conference on Apr. 28-29 in College Park, MD. Click here to register now!