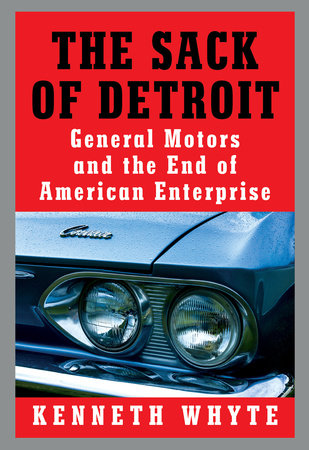 “General Motors and the city of Detroit were sacked in 1966 by a well-educated, well-placed, suit-and-tie-wearing band of crusaders united by a determination to knock automakers and the whole of corporate America down a peg and make them pay for perceived sins...They brought to its knees the greatest industrial enterprise in human history.”

So reads part of the prologue in The Sack of Detroit: General Motors and the End of American Enterprise, the latest exhaustive history from Kenneth Whyte. The author, a Canadian journalist and media executive, saw fit to fill 400 pages with these and many other sweeping assertions about the place of automotive behemoth GM in American commercial history — and in all of human history, if the reader accepts the premise above.

Your reviewer does not.

Could any book be evaluated for its separate qualities on a standalone basis, like so many subjects in grade school, then The Sack of Detroit might warrant a checkered report card, with an A- here and a C+ there. Alas, a book is the sum of its parts, and only the best ones amount to more. The flaws in Whyte’s new work tend to sully its finest features, some of which are very fine, indeed.

To highlight the positive, the author’s research is powerfully thorough. It seems he left no report, testimony, notepad scribble, or utterance unconsidered, whether from GM, Congress, or the cast of a thousand car-safety activists, whom the figure of Ralph Nader led the charge of so famously.

Nader emerges as the book’s protagonist. The Harvard-trained lawyer and activist made himself a name — and a people’s hero — by fighting the midcentury car industry. Nader is credited in consumer-movement mythology with singlehandedly overhauling the U.S. auto regulatory apparatus. Whyte is astute when he points out the falsehoods of Nader’s image as “an independent researcher, a lone wolf,” when, in fact, Nader was but one face in a sizable crowd of reformers who sought change, and no small glory for themselves, in bringing auto safety under federal purview for the first time.

Whyte indicts especially the roles of Abraham Ribicoff, a Democratic senator from Connecticut, and the American Trial Lawyers Association (ATLA), which gained substantial influence in representing the real and perceived victims of GM’s faulty cars — including the accident-prone Corvair, a key focus of the book’s middle section.

Ribicoff used Nader as his undisclosed representative throughout a busy program of public engagements, which would culminate in the passage of the National Traffic and Motor Vehicle Safety Act of 1966. The ATLA, for its part, leveraged Nader’s clout and lone-gunslinger persona to advance their collective interests. “The legend of Ralph Nader...was their joint fabrication,” Whyte writes. He is persuasive enough in that.

Where Whyte loses the reader is among the thicket of claims that GM had the kind of global importance the author sees. Granted, many of those alive in the 1960s accorded to GM similar praise. The company made history, no doubt, but the more salient question is: How much?

American enterprise did not end with the decline of GM — which continued to flourish after the Corvair debacle and subsequent wave of litigation it inspired — nor did the country stop producing cars or prosperity for the hundreds of millions who have long enjoyed its first-world status. In his epilogue, Whyte more humbly offers that the GM experience is “the history of American business in microcosm,” a more accurate appraisal of the company’s place in a society now past. This thesis fits the book better, but as any high-pressure car salesman would know, it doesn’t move as much inventory.

Despite its heft, The Sack of Detroit is worth getting through for its last chapters, in which Whyte draws sharp parallels with today’s American industrial giants and the backlash they face over reckless stewardship. He describes a pattern that has become a template for lawmakers and for the floggings they are now expected to give to sweating executives under Congress’ harsh lights. Once a controversy reaches its social and legislative height, and at the cue of elected officials, “the nation then turns or divides to heap responsibility for all those costs entirely on business.”

One could cast the company of their choice in this consumer-advocacy passion play, which has recently played out in Washington, DC, for industries as diverse as technology, pharmaceuticals, and finance. Facebook, AbbVie, and Lehman Brothers have all had their turn in the hot seat, for the public has demanded it. Whyte correctly points out that, for Nader and his ilk, too little thought was given to whether all bad cases can be attributed to corporate culpability, and whether the consumer bears a share of responsibility greater than zero. Can the car or its maker really be blamed if the driver was drunk?

In the end, The Sack of Detroit succeeds most in its portrayal of the achievements and idol status of the great American automobile, and the manufacturers — GM chief among them — which so many have worshipped. The slow demise of General Motors was not the “end of American enterprise,” as Whyte claims throughout. Instead, it was a continuation of a long road, as old as human ambition, toward a constantly shifting balance among business, regulation, and consumer vigilance. That is, as ever, where American enterprise finds itself today.

William Fleeson is a writer and former business journalist based in his native Washington, DC. His writing has appeared in Argus Media, the Hill, and many other publications. He was a finalist for the 2020 New Millennium Writing Award.