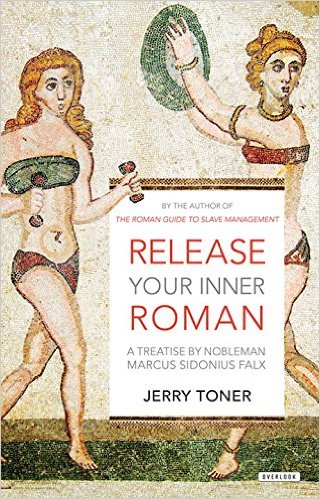 Despite its playfully anachronistic title, Release Your Inner Roman packs solid information about culture and custom in the waning years of the Roman republic and the first century of the empire. Author Jerry Toner, a Cambridge University fellow and mischievous expert in such matters, has crafted this slim volume as a self-help book inscribed by one Marcus Sidonius Falx, a sturdily upright (but imaginary) Roman from the privileged (i.e., slave-owning) class of the day.

Toner’s fictional persona — not to mention the title of the book itself — gives the game away from the start. In Toner’s hands, the ever-earnest Falx is unswervingly deadpan and often unintentionally comic, but he’s always reliably informative.

He’s a wellspring of juicy nuggets about tempora and mores among the nobility, and he tees them up as exempla to be followed rigorously by readers hoping to move up the Roman social ladder. Hence the “self-help” designation Falx applies to his book, which author Toner conveniently organizes into nine chapters that cover topics like family, romance and marriage, personal advancement, recreation, and religion.

While Release Your Inner Roman is at times laugh-out-loud funny and at others shocking and disillusioning, it’s worth your attention for its thoroughgoing accuracy about ancient Roman social life. At the end of each of Falx’s chapters, Toner himself presents a brief commentary on the literary and historical sources for the assertions his narrator has made. And, yes, they all check out. And that makes Release Your Inner Roman a very useful guide to the real-life customs of its era.

Falx is nothing if not comprehensive, covering topics such as washing your toga in urine to keep it blindingly white; instructions for inducing vomiting after a meal to clear the way for another go at the groaning board; and eating a bear’s testes to deal with epilepsy.

Falx is no laggard with his anecdotes, either. He recounts how one admirable dinner host graciously anticipated his guests’ post-prandial urges: “So don’t hold back if any of you need to go…Everything’s ready to go outside — water, a commode, a slave with a sponge stick to clean you.”

Falx also reports how the Emperor Caligula gave his favorite horse a house and a squadron of slaves to answer the animal’s needs. He also promised the steed a consulship — a pledge that went unfulfilled due to his untimely demise (Caligula’s, not the horse, who we have to presume got to keep his new residence but never received a fancy toga.)

And the hits keep coming. Here’s a selective list of Falx’ bromides on women as wives and lovers:

Quite the enlightened lot, those Romans.

The Boston Massacre: A Family History