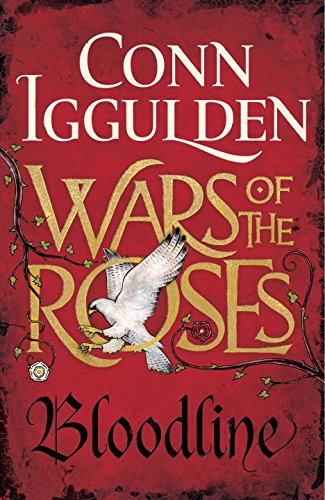 The beauty and curse of historical fiction is that savvy readers will make constant comparisons between the reality faced by the characters and the world the author creates. Rarely do the two harmonize perfectly — but Conn Iggulden may have achieved something close with his third book in the Wars of the Roses series, Bloodline.

The Wars of the Roses were a bloody inter-familial conflict in 1400s England between the Houses of Lancaster and York, the two sides so intertwined that even contemporaries sometimes had trouble distinguishing where individual loyalties lay. Iggulden throws the reader straight into the center of the action: Queen Margaret of Anjou is leading a ragged army south to London, where the Yorkists hold her husband — the mentally challenged Henry VI — prisoner.

English-history buffs will recognize the titles of Somerset, Warwick, Clifford, Clarence, and Norfolk and know the men to whom they belong. However, in an age when the names Richard, John, Edward, and Henry tended to dominate, the ice-cold plunge into a war among multiples of these could easily confuse a reader unfamiliar with Iggulden’s first two books in the series.

Once the reader is warmed up, however, the narrative is quick and colorful. Henry VI is soon returned to his queen, who continues the progress to the very gates of London — where the Lancaster forces are turned away and refused entry to the city. Inside the city, Edward Plantagenet, son of the Duke of York, whose head adorns a pike on the walls of York in the first few pages of the book, is preparing his own army to beat back the Lancastrians.

Iggulden’s account of Edward proclaiming himself king at Westminster in 1461 — while Henry VI still wore the crown — captures well the headiness of the moment while preserving instances of tense humor, such as Edward nearly crowning himself (and making “a mockery of the church”) and anxious onlookers recalling the coronation of William the Conqueror, in which misunderstandings of congratulations in different languages led to fights and riots all over London.

All of this is leading to the primary conflict of the novel: the bloody battle of Towton, in which an outnumbered Yorkist army managed to defeat the Lancastrians and force Margaret and Henry’s retreat to Scotland.

Longtime readers of Iggulden’s series will note the subtle change in perspective over the course of this book as the balance of power shifts from Lancaster (Margaret of Anjou and her fictional spymaster, Derry Brewer) to York (Edward and his brothers — one of whom is the future Richard III). Iggulden makes the switch nearly imperceptible, and it goes a long way in reviving in the reader contemporary feelings about the two houses.

There is, however, some disappointment in the treatment of Margaret of Anjou in Bloodline. In the previous novels, where her leadership of the House of Lancaster was key, Iggulden spent much time illustrating the formative events of her life: her childhood in France, and her marriage to Henry and subsequent separation from him, all of which were seemingly meant to provide her defense against the moniker that would stick to her after York’s victory: “She-Wolf of France.”

Here, against the constant action, there are only oblique references to the sorrows she endured, the disrespect from an army raised to follow men, and her fierce love for her son as motivating factors for her political calculations.

Her “still-slim figure” is mentioned more than once as shorthand reference to her transformation from a traditional queen consort meant to produce heirs, to a warrior queen tenuously holding the reins of a nation. History is traditionally dismissive of the vanquished, and this is where historical fiction can serve as a literal lifesaver. One hopes that Margaret will make a stronger impression in the last of Iggulden’s Wars of the Roses books, as she is a key player in one of the most important battles of English history.

Bloodline leaves the reader with the looming specter of Richard III, the innocent “Princes in the Tower,” and the ultimate showdown between Richard and Henry Tudor. With Iggulden’s rare flair for realistic dialogue and scene-setting, it is sobering to remember from Iggulden’s historical end notes that most of the facts — and nearly all of the deaths — in the series are real.

Alka Pradhan is a human-rights lawyer living in Washington, DC. She is a committed Anglophile and amateur historian specializing in the Elizabethan era.