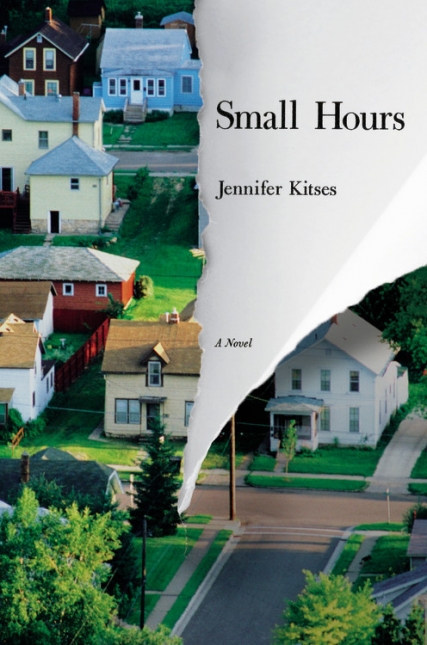 Her book offers, as well, a fascinating, and uncomfortable view of a world we may not want to recognize as our own. The story of a marriage troubled by secrets is one that many authors have explored, but Kitses makes it her own by creating characters who mirror some of society’s most disturbing tendencies — a toxic obsession with time and productivity, an assumption of violence everywhere under the surface waiting to explode, a dream of middle-class success and happiness that is, by design, unattainable.

These are the realities of life for the book’s protagonists, Helen and Tom, although certainly they’ve made some bad choices, too. A young professional couple with twin 3-year-old girls, they have relocated from Manhattan to a former mill town, but the recession has wrecked property values and turned Helen into an underpaid freelancer, with the added hardship that their new home is a two-hour commute to Tom’s job in the city.

Compounding these stresses are some powerful secrets Tom has kept from his wife but which now threaten to destroy their life together. Helen has become a person of secrets, too, withholding her thoughts and fears from Tom, contributing in her own way to the erosion of intimacy between them.

Kitses portrays their world with impressive skill. Her insider’s view of the high-pressure newsroom where Tom churns out corrected copy all day long is rich and precise. This place is a swirling circus of clashing personalities and rapid-rolling deadlines, which Tom struggles to keep up with, distracted as he is by the crisis in his marriage:

“He checked the queue and opened the next story, a brief filed by a young reporter — the nephew of the global sales manager — whose tendency to cut and paste from Wikipedia had earned him the nickname Control V.”

Tom survives that one, but then immediately “his screen blazed red with an urgent message from the Hong Kong bureau chief, who apparently never left the office. WTF? Where’s our panda feature?”

The people in that newsroom, and everywhere in the book, have a distorted relationship with time. They parse it into fractions and set impossible goals for those fractions. They are obsessed with time, watching it, bargaining with it, but often don’t get much done. They delude themselves into thinking they can manage time, not unlike the way Helen and Tom convince themselves they can manage their destructive secrets and lies.

Helen, way behind on a project deadline, gets a babysitter to watch her daughters so she can work, but as soon as the sitter arrives, she goes for a run instead. On her return, she calls Tom, spends some time looking out the window, then learns that the sitter needs to leave shortly.

Helen’s marital problems are causing some of this procrastination, but she’s also guilty of a kind of hubris about time management that likewise afflicts Tom. His hubris is clear from the book’s opening scene, in which he decides, at 6:20 a.m., that he can fit in a big outdoor excursion with the twins before he catches his 7:13 train. The world Kitses paints is one that has run out of time. But its inhabitants can’t let time go.

Kitses is also interested in our relationships with violence. In this world, it feels normal to be angry — Helen is a key example, kickboxing at the gym or aiming her high-powered water gun out the window at her neighbors — and everyone is dangerous, including idle teenagers and even toddlers.

Her twins imitate the grown-up violence they see, turning an ugly scene they’ve witnessed into a bath-time game that involves one of them repeatedly smashing a shampoo bottle out of the other’s hand.

It’s to Helen’s credit that their behavior disturbs her and she recognizes what inspired it. But it is not to her credit that her reaction is to lash out. She hisses at them, which makes them cry and shrink from her. She watches them “scared and shivering in the cooling water” and feels heartbroken. Her complex reaction — rage and love and sorrow — humanizes her, even though, like other characters in the book, she is not easy to like.

The complicated experience of parents trying to provide, financially and emotionally, for their kids is something Jennifer Kitses does well in Small Hours. She nails life with toddlers as pitch-perfectly as she captures the life of Tom’s newsroom. The twins are dismantling dollhouses, sleeping through sirens, melting down without warning, demanding the same book again and again, escaping from the house when no one’s looking. It’s an unsentimental but sympathetic look at parenting. It is hard not to feel for this flawed, selfish, overwhelmed couple.

This attention to the domestic sphere is something that distinguishes Small Hours from other books about big-city career-climbing and suburban keeping-up-with-the-Joneses. It’s a book that says the struggles of young, middle-class parents matter.

Small Hours is not small. It’s a highwire act, a suspenseful psychological thriller that holds up a mirror to society. The characters’ disenchantment is familiar as they ponder the old beliefs they are trying to let go: “That hard work would be rewarded. That those who followed the rules wouldn’t slip behind. That there was some value — a trade-off, even — in focusing on goals, not dreams.”

At the end of Small Hours, we can only hope there is a way back to a place where there are some dreams left.

Sally Shivnan is author of the short-story collection Piranhas, & Quicksand, & Love. Her fiction and essays have appeared in the Georgia Review, Antioch Review, Glimmer Train, and other journals, and her travel writing has been featured in anthologies including Best American Travel Writing, as well as in the Washington Post, Miami Herald, Nature Conservancy Magazine, and many other publications and websites. She teaches at the University of Maryland Baltimore County (UMBC).