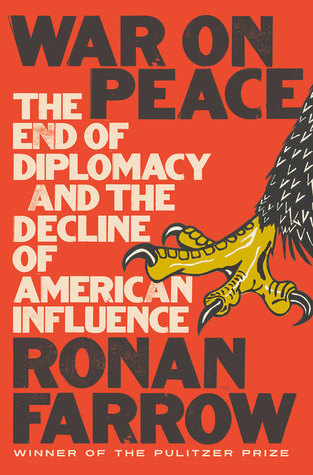 The United States won its independence on the strength of an alliance with France negotiated by America's first great diplomats: Benjamin Franklin, John Adams, and John Jay. The young journalist and one-time diplomat Ronan Farrow gives a nod to these Founding Fathers in the opening chapter of his book, War on Peace, before turning to a critical account of "the end of diplomacy" in post-Vietnam and post-9/11 U.S. foreign policy.

In Farrow's telling, U.S. foreign policy has been dominated by "mil think" at least since Vietnam, with the result that he labels in the subtitle as "the decline in American influence."

Farrow himself saw the dominance of military over diplomatic statecraft in his two years as an aide to the late Richard Holbrooke during Holbrooke's ill-fated tenure as the United States' "special representative" to Afghanistan and Pakistan.

The book ends, after Holbrooke's death, with a brief and sharply critical section on Donald Trump in the White House and Rex Tillerson on his way out as secretary of state. The White House is "crowded with military voices," Farrow writes. Holbrooke's "fear of militarization," he adds, "had come to pass on a scale he never could have anticipated."

For Trump, diplomacy is not merely dead, but discredited. He withdrew from the Paris climate agreement and the Trans-Pacific Partnership in his first weeks in office even as he blustered against NAFTA and the six-power nuclear deal with Iran. Farrow's judgment is blunt: Trump has "squandered diplomatic leadership."

The book reached stores just as Trump, in fact, withdrew from the Iran agreement to loud disapproval from the United States' European allies and most foreign-policy experts. Ironically, however, Trump was at the same time preparing for high-wire, one-on-one diplomatic negotiations with North Korea's enigmatic leader, Kim Jong-un, aimed at coaxing the rogue regime into denuclearization.

As Trump himself might say, "We'll see what happens."

Farrow devoted the first half of his book to a memoir of his role in the State Department human-rights position that he gained on the strength of a connection with Holbrooke from John Kerry's presidential campaign in 2004.

Holbrooke — "the closest thing to a father I had" — encouraged Farrow to keep a diary. The memoir has very much the feel of a diary: episodic vignettes filed with contemporaneous observations but elaborated with well-documented research into various sources, official and non-official.

Holbrooke achieved his greatest diplomatic triumph by brokering the Dayton agreement in 1995 that helped end the Bosnian war after more than three years. He hoped to broker the same sort of deal in Afghanistan between the U.S.-backed government in Kabul and the Taliban, but Washington squelched the idea of power-sharing with an Islamist faction hostile to Western ideas of democracy and human rights and opted instead for a military "surge." Holbrooke was "sidelined," though not fired.

Two years into this role, Holbrooke fell ill while at State Department headquarters and was taken to a nearby hospital for surgery to repair an aortic dissection. On the operating table, Holbrooke facetiously told the doctor, "You've got to end this war in Afghanistan." Farrow arrived at the hospital just as Holbrooke was taken off life support.

Farrow's account is too brief and his perspective too limited to settle the issue of whether a peaceful reconciliation with the Taliban could have been achieved. He voices frustration with his own stepped-on role as liaison to human-rights groups.

He wrote memos about the extrajudicial killings — EJKs, in State Department usage — of Pakistani journalists trying to expose the Pakistani military and intelligence services. But raising the issue, Farrow learned, "was an uphill battle…another fight not worth picking" as the United States was trying so hard to enlist its ostensible ally in counterterrorism operations.

At age 30, Farrow has achieved stature and prominence beyond his years in both of his careers: diplomat and journalist. He was finishing his book even as he was digging up the accounts of sexual harassment by the Hollywood producer Harvey Weinstein that won him the Pulitzer Prize.

Farrow gives Trump a pass of sorts by spreading the blame for "diplomats sidelined and soldiers and spies ascendant" back to 2001. The book comes too soon to provide a full, Bob Woodward-style examination of Trump's foreign policy, but one expects to read or see more from Farrow on the subject in either of his journalistic homes: the New Yorker and NBC News.

Farrow's view is clear from his decision to entitle the final section, "Present at the Destruction," in wry contrast to Dean Acheson's magisterial memoir, Present at the Creation. The full extent of the damage remains to be seen.

Kenneth Jost, a graduate of Harvard College and Georgetown Law School, is author of Trending Toward #Justice, the annual series Supreme Court Yearbook, and the legal affairs blog Jost on Justice. He wrote often about U.S. foreign policy and international human rights issues as staff writer or contributor for CQ Researcher from 1994-2016.