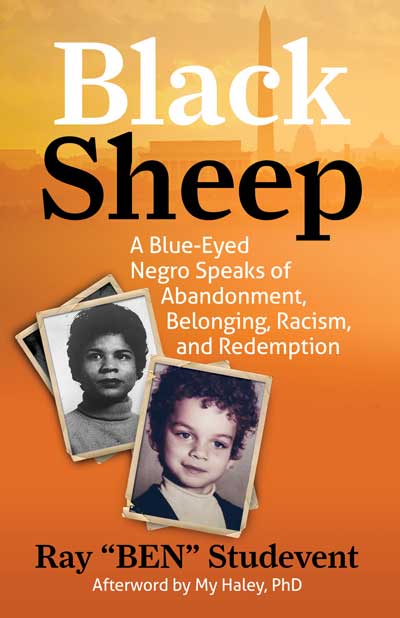 Black Sheep is an authentic Washington, DC, story. In this powerful memoir, Ray Studevent — nicknamed BEN (Blue-Eyed Negro) by his biological father — recounts his early years growing up in “the Blackest part of the Blackest city in America” during a period of extreme racial tension.

Abandoned by his birth parents, Jackie (who is white) and Ray (who is Black), Studevent was for years sent to orphanages or shunted from one foster home to another. Sometimes he spent the night at the nurse’s station in a local hospital where his drug-addicted mother was being treated. All he wanted was “safety and someone to care for me,” he writes. His wish was granted when his father’s uncle, Calvin Studevent, and his wife, Lemell, adopted him.

However, Lemell was not keen on the adoption. Studevent’s complexion was fair and, having grown up in Mississippi, where blue-eyed Klansmen terrorized her community, she was leery of whites, especially those with blue eyes.

From an early age, “I knew that I looked different from everyone else,” he writes. A Black boy trapped in white skin, he constantly found himself in situations in which he had to choose sides. Race became an obsession, exacerbated by his awareness that his biological parents had abandoned him. Furthermore, Jackie’s addiction left him nervous and hyperactive, with a propensity for trouble.

A Marine Corps veteran, Calvin was a kind but no-nonsense disciplinarian who understood that Studevent needed a stable environment. He also knew that as a light-complected Black child in an almost entirely Black neighborhood, Studevent would need survival skills. Calvin taught him to fight, talk, and move like a Black. He was a model Black father for a boy seeking an identity.

“Warm, caring, and just plain decent, I admired him deeply,” writes Studevent. “I watched his every move, modeling how to act, how to be a man.”

But Calvin died unexpectedly, leaving the boy devastated. Not being a blood relative, Lemell had no obligation to continue caring for him. She could have returned him to the orphanage or handed him over to one of his dysfunctional parents. Yet her devotion to a white, blue-eyed Jesus helped her recognize the unfairness of taking out her aversion to whites on an innocent child. Lemell decided to raise Studevent and her two daughters alone, as a single mom. Moreover, working as a librarian, she managed to scrape together enough money to send Studevent to private schools.

In his 50s as he writes this memoir, Studevent is painfully aware that he has made a mess of things. In spite of Lemell’s heroic efforts, he did not go to college or pursue a military career like Calvin, as she had hoped. Instead, he became depressed, even suicidal. “No parents, no race and no future and a warped feeling of no love,” he told his sister. “It was time to check out.”

Anxious to escape the environment where he was always an oddity, he plunged into a life of crime and landed in prison. He became involved with a Mexican woman, with whom he fathered a daughter, and then with a Chinese woman, who introduced him to high-stakes stock investment. But material wealth brought him no satisfaction. It was not until he joined the Jehovah’s Witnesses and became a real father to his daughter that he found spiritual peace and a sense of purpose.

Studevent begins his story at the end, when Lemell is an elderly Alzheimer’s patient. Visiting her at the hospital, he is shattered by her inability to recognize him and her refusal to believe she could have raised him. Much of the memoir consists of the anecdotes he recounts to jog her memory, and some of them are hilarious.

For example, when Studevent was little, Lemell sent him to the barbershop for a haircut, but unaccustomed to cutting straight hair, the barber made a mess of things. Dragging him back to the shop in the pouring rain, she burst in and demanded, “Who the hell cut my son’s hair?” then proceeded to spew insults over barbers and patrons alike. Much later, she sent Studevent on a hunt for hose to match her purple church dress and “goosy” (Gucci) shoes. To make sure he got it right, he bought stockings in every shade of violet.

Through these stories, Studevent provides a vivid picture of a dynamic Black community with a rich culture. He expounds on the centrality of the Baptist church and the importance of food (particularly, the right cooking grease), clothes, cars, music, and certain TV and radio programs. Howard University occupies a special place in the minds of Lemell and many other inner-city Blacks in DC. It is the focal point of their aspirations for their children and a symbol of Black achievement.

However, most of Studevent’s memories are imbued with pain. As a child competing for a place in the junior choir at church, he overheard one of the fathers tell his son: “Don’t let that White boy out blow you.” And then, to make matters worse, his biological father showed up drunk in the middle of his solo, creating a scandal.

When he was in high school, the affluent Black parents of his friend Andrew invited him to dinner. Lemell was skeptical: “The only reason they let you into their inner circle is because of your complexion,” she told him. “Once they find out you don’t have the right zip code, they will kick your milky white butt right out.” Nevertheless, Studevent convinced her to accompany him. As Lemell feared, the atmosphere turned noxious when Andrew’s mother began making derisive remarks about Lemell’s dark skin color, provoking Studevent to defend her.

Incidents such as these taught him that prejudice is ubiquitous. Lemell, however, was at least aware of her own biases and prayed to be free of them.

What emerges from Studevent’s memories is the portrait of a strong, fearless, hardworking, outspoken, kind, and very smart Black mother. After a burglar breaks into her house, Lemell buys a gun and spreads the word on the street that she knows how to use it. Similarly, when people challenge her for raising a white child, she confronts them head-on.

But Lemell is as apt to use persuasion as intimidation to get what she wants. When Jackie refuses to sign the papers allowing her to adopt Studevent, instead of threatening her, Lemell offers her a cigarette. Through gentle words, she coaxes Jackie to the attorney’s office where they will make the adoption final.

Black Sheep is truly a story for our times. In this period of polarization and exclusionary identity politics, Ray Studevent’s memoir is an inspiring reminder of our ability to overcome our biases and reach out to others. He dedicates his book to Lemell and promises the first copy will be placed on her tombstone at Arlington National Cemetery. It is a fitting tribute to a great lady. I wish I had known her.