The Hag: The Life, Times, and Music of Merle Haggard 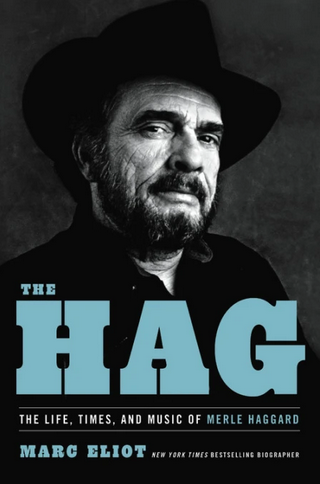 For all its prosperity and collective talent, Nashville has never sat at center stage in the American music industry. Among country artists, only Garth Brooks cracks the top 20 in all-time album sales. Taylor Swift surely knew that when she pivoted from country to pop.

And Bakersfield is not Nashville. Marooned along California’s landlocked I-5 corridor, it’s known mostly for oil, agriculture, and dust. But Bakersfield also ranks as a minor capital of country music, the birthplace of a leaner and meaner sound than the syrupy, stringy stuff that often pours forth from Music Row.

The two big Bakersfield names are Buck Owens and Merle Haggard. Owens was a first-rank guitarist of the postwar era. And Hag? Well, he may just be the most important country artist since Hank.

The Hag, out this month from veteran biographer Marc Eliot, bills itself as the first major biography of Merle Haggard, and it aims to be definitive, weighing in at nearly 400 pages with endnotes and an index, evidence of rigor sadly lacking in many country bios.

If you’re a country fan, you know all about Merle, performer of 37 number-one hits and author of more bona fide country classics than maybe anyone else of the modern era. Merle was a real-life outlaw. He served time in prison and saw Johnny Cash perform in San Quentin as a jump-suited inmate. Soon after, he earned his freedom and launched a music career, writing and singing songs rooted in his own hard life, a seemingly endless string of outlaw masterpieces about bad choices, loss, and regret, including “Swinging Doors,” “The Bottle Let Me Down,” “I’m a Lonesome Fugitive,” “Branded Man,” “Sing Me Back Home,” “Mama Tried,” “Hungry Eyes,” “Workin’ Man Blues,” and “If We Make It Through December,” to name a few.

If you’re not a country fan, you probably know less about Merle and more about Johnny Cash and Willie Nelson, two country greats who crossed over to real success in the pop marketplace. And they are great, but Merle had the complete package: a beautiful baritone voice, movie-star looks, a sterling backing band, and a depth of songwriting talent that maybe even Willie and Johnny couldn’t quite match because they didn’t live their songs the way Merle did.

Merle lived a hardscrabble American life not too far removed from the railyard adventures of his hero, Jimmie Rodgers, the father of country music. Merle was born in the final years of the Depression. His family lived for a time in an actual boxcar. His father died of a brain hemorrhage before Merle turned 10. By his teens, Merle was stealing cars and writing rubber checks, hitchhiking, and jumping freight trains. He was in and out of jail.

He also shadowed country stars, and one night, Lefty Frizzell heard him sing. Lefty insisted Merle go onstage. He became a country singer then, but before his career could take off, he wound up back in jail. Watching Johnny Cash play at San Quentin inspired him, and he exited prison with fresh resolve to make a living through song. He scored his first hit with “Sing a Sad Song” in 1964, while in his late 20s. His first few singles covered other artists, but by “Swinging Doors,” he was mostly writing his own.

Marc Eliot has written biographies of Cary Grant, Jimmy Stewart, and Clint Eastwood. He is a prolific author and knows country music. With The Hag, I sense that he tried to write in a voice approximating Merle’s own. The resulting text reads like something written 50 or 60 years ago. It’s hokey in places, just like Merle, and pitched to male readers, especially in matters of sex.

Eliot writes of “warm and wet whore heaven,” of “hot and willing girls,” of a woman’s “dress-filling skills,” of “the T and A turnstile,” and of the moment when Merle’s music “gave country music back its balls.” Some of the direct quotes are worse. All this might have passed unnoticed in 1995 or even 2015, but it will be interesting to see if the author catches flak for invoking boys-club parlance in 2022. Then again, Merle himself used a lot of the same language in his two memoirs, both enjoyable reads.

Time has a way of sorting out greats from also-rans. Country fans always held Merle up there with George and Tammy, Willie and Waylon, Loretta and Dolly, as country royalty of the long-player era. Music geeks and record collectors gradually recognized Merle’s primacy as a songwriter and performer: Copies of his debut LP fetch $50 online. But Merle’s legend has seeped only slowly into the consciousness of your typical Stones or Springsteen fan.

One impediment was “Okie from Muskogee,” a tongue-in-cheek, anti-hippie anthem from 1969 that won Merle massive praise from the military, the Nixon Administration, and most country fans. Yet apart from the Grateful Dead, most rockers and their fans hated it. Merle apparently harbored real hatred toward hippies until his autumn years, when he discovered pot and his stance softened. (In one cringeworthy scene from The Hag, Merle reads a poem he’s written for First Lady Pat Nixon while “America the Beautiful” plays in the background.)

The long wait for the world to recognize Merle Haggard provides The Hag with a nice hum of dramatic tension, although I wish Eliot wouldn’t have punctured it at the end of some chapters with a line revealing what’s about to happen (e.g., “Was there anything for Merle to look forward to? Plenty, as it turned out”).

But The Hag is a breezy read, and the payoff arrives in 2005, when Bob Dylan invited Merle to open some dates on his Never Ending Tour. For Merle, at least, the pairing was perfect. Dylan, by then, was alienating audiences by singing his lyrics in scattershot bursts and without discernible melody. Many Dylan fans had never seen Merle, who dazzled them with crisp sets of his devastating work.

Droves of disaffected Dylan fans fled for the exits after Merle’s opening. At one point, Merle actually scolded Dylan for mumbling behind a piano rather than stepping to the front of the stage with his guitar, a beautiful moment of cultural disconnect. Merle was a performer: He was never going to understand someone who hid from his fans. Those were aristocratic pretensions, and country is a working-class game.

The Dylan tour posited Merle Haggard as a national treasure. And Ken Burns, whose 2019 country-music documentary reached millions, properly placed him among the greats three years after his death. The Hag isn’t for everyone, but stick with it, and you may find yourself tearing up toward the end.