War by Other Means: The Pacifists of the Greatest Generation Who Revolutionized Resistance

A look at the fighters who refused to take up arms. 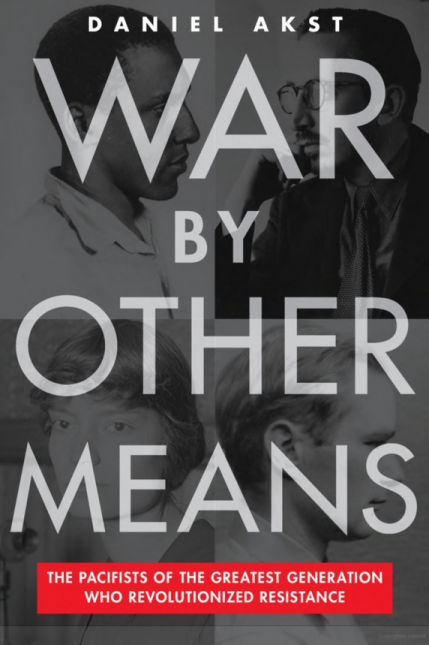 Eight decades after World War II, storytellers are still mining its infinite catastrophe. Journalist Daniel Akst’s well-written War by Other Means tells the story of U.S. pacifists facing off against the Good War — and how being on the wrong side of 1940s America steeled and trained leaders who used nonviolence decisively in the Civil Rights Movement two decades later.

American draft resistance dates to the Quakers and other colonial peace churches that declined to fight Native Americans. Though many resisters were fined or imprisoned during the Revolutionary War, state constitutions often included religious exemptions from military service. (James Madison proposed one in the Bill of Rights.)

As the prospect of another war ripened in the 1930s, half a million students joined a nationwide “strike against war.” (Students at Princeton organized “Veterans of Future Wars” to demand government bonuses before they were killed.) Pacificism could be heard from pulpits and on the radio, whose listeners included a young Martin Luther King Jr.

When the first U.S. peacetime draft came in 1940, 20 Union Seminary students drew nationwide attention with a statement of resistance, and eight of them — including Dellinger — pleaded guilty in federal court after refusing to register. “We cannot in this apparently small matter fail to follow the teachings of Jesus,” one of them told the judge.

Day’s radicalism also came straight from the Gospel. She rejected Catholic Just War doctrine, insisting that only nonviolent resistance would be justified even if the U.S. were invaded, and purged anyone from her Catholic Worker movement who disagreed.

But after the Japanese attack on Pearl Harbor dissolved the powerful isolationist movement, much of the establishment religious Left swung to support the war. More than 70,000 pacifists registered as conscientious objectors, often as military medics and chaplains, or in civilian camps run by the peace churches.

For many of the remaining resisters, prison during wartime was a catalyst where “American pacifism shifted from defense to offense.” Inspired by Gandhian philosophy, suffragists, and labor radicals, they slipped notes through ventilation ducts, held hunger and work strikes, and orchestrated outside publicity. Many endured beatings, food deprivation, and force-feedings.

Support came from New York publisher MacDonald’s radical antiwar magazine Politics, which defended the rights of Blacks and conscientious objectors. “It seems to me the time is ripe and overripe,” he told a crowd in Harlem, “for this country to decide whether it is pouring out blood and treasure to win a war for democracy or Jim Crow war.”

Future civil rights leader Rustin traveled the country in 1942 as a “one-man nonviolent army,” founding chapters of the Congress of Racial Equality and leading workshops with a mixture of oratory and renditions of Elizabethan songs and Black spirituals. His prison term for refusing to register for the draft became a master class in organizing. (After Rustin was beaten by a white inmate while trying to desegregate the dining hall, fellow prisoners asked that the assailant not be punished.)

The pacifists were also learning how to mobilize support. Media coverage helped win a 133-day work strike against segregated dining halls in a Connecticut prison. Conscientious objectors reached out to journalists about the neglect and abuse they encountered working at mental institutions — including patients mopping their own filth while naked and being beaten with broomsticks — providing photographs and sparking coverage in Life magazine.

After the war, Akst’s resisters put their learnings to work in support of civil rights and other 1960s protest movements. Day’s Christian “personalism” and beliefs in the power of individual example strongly influenced Martin Luther King. MacDonald’s publications called for a nonviolent movement to do what political incrementalism would not. Dellinger helped lead the anti-Vietnam War campaign and was tried as one of the Chicago Seven after the 1968 Democratic Convention.

As for Rustin, he became an architect of the nonviolent civil rights movement. At the right hand of Dr. King, he helped create the Southern Christian Leadership Conference and organized protests, including the 1963 March on Washington, where he provided a backstage pass to his old friend Dellinger.

But these outsized historical achievements should not obscure the subtler offerings of pacifists opposed to a necessary war. “We who allow ourselves to become engaged in war need this testimony of the absolutist against us,” wrote theologian Reinhold Niebuhr, “lest we accept the warfare of the world as normative, lest we become callous to the horror of war, and lest we forget the ambiguity of our own actions and motives and the risk we run of achieving no permanent good from this momentary anarchy in which we are involved.” Thanks to Daniel Akst, these lessons can be renewed.