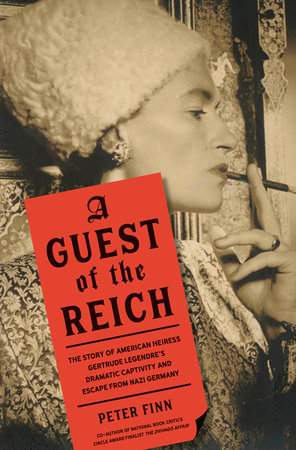 Imagine being an entitled “guest” of the Third Reich. Gertrude Sanford Legendre was just such a person in the ironically named A Guest of the Reich, a page-turner of a narrative that recalls the adventures and misadventures of a wealthy American socialite who hardly suffered during a self-indulgent life that included six months of genteel captivity inside Nazi Germany after D-Day in 1944 and into 1945.

Ah, but there were consequences for others, when, on leave from her glorified London desk job with the Office of Strategic Services (OSS), the forerunner of the CIA, Gertie determines to go to the front for a firsthand look at the fighting. To her surprise, the town she and her three companions thought had fallen to the Allies is back in German hands.

In Wallendorf, they come under fire. The driver and an undercover OSS operative are wounded; all are taken into custody. Gertie, dressed as a WAC, becomes the first American woman in uniform captured by the Nazis.

Months later, while she is being shuttled from one high-end hostelry to another, two of her original three companions die in Allied bombings. She is saddened to learn of their deaths but appears to take no responsibility, though her reckless lark had placed them in harm’s way in the first place.

Meanwhile, Gertie manages to keep state secrets from interrogating Nazis, who suspect her of being a spy. But she is for the most part living the good life, captive but also coddled.

Drawing on her personal diaries, memoirs, correspondence, and government files — both U.S. and German — author Peter Finn, national security editor at the Washington Post, has crafted a taut, cinematic story that could’ve been a black-and-white high-society hijinks film from Hollywood’s golden era, a comedy of manners in a hostile land.

To set the scene and the character, Finn devotes the first third of his book to Gertie’s charmed prewar life. From a prominent family of inherited wealth — for whom Sanford, Florida, is named — she prefers safaris to debutante balls. She revels in killing wild game, and some of her prey winds up stuffed and displayed at the Museum of Natural History in Manhattan.

Gertie’s jottings reveal her to be a racist and an anti-Semite: “You know how I hate Jews,” she writes in one letter, specifically exempting a Jewish OSS official she likes. Her most challenging choice in life, it seems, is which of two handsome and well-connected Princeton brothers to marry. She chooses Sidney, and the couple settles into a South Carolina plantation called Medway that her father bought her as a gift for $100,000.

Medway comes with a host of African-American servants, likely descendants of those who had been enslaved there, though Finn doesn’t explicitly make the connection. The couple also has two children, who are of little interest to their parents and who are raised largely by nannies when they aren’t being shipped off to boarding school.

When the Japanese attack Pearl Harbor, Gertie and Sidney leave their home, “our three faithful negroes waving behind." Sidney joins the naval reserve as an officer and is sent to Hawaii. Using her connections, Gertie gets a job with the OSS in Washington, DC, a city not to her liking, despite her high-toned social life there. Pulling strings, she is reassigned to London, where she handles cables and develops deep knowledge of the office’s operations and operatives.

Following D-Day, she manages a pass to visit Paris, and from there travels to Luxembourg, where her six-month escapade begins. Eager to see the war, she connects with Maxwell Jerome Papurt, an OSS officer; Doyle Dixon, a private attached to the OSS; and Bob Jennings, a naval officer assigned to the OSS in London; and off they go in a jeep to a border town they believe to be in Allied hands. Imagine their surprise when they come under German fire.

With Papurt and Dixon wounded, the group has no choice but to surrender. The Nazis, we learn, have, by then, established a two-tier incarceration system for POWs. While regular GIs languish in various stalags throughout the Reich, prisoners deemed high-level get first-class treatment.

Thus, Gertie is confined inside the Rheinhotel Dressen, a fancy establishment overlooking the storied river, along with French luminaries, including the sister of Charles de Gaulle. There, a civilian staff serves ample dinners in the dining hall, and the exalted prisoners receive cigarettes and cigars, and even brandy on occasion.

She also spends time in a lakeside villa in southwestern Berlin, on Little Wannsee, linked to Big Wannsee, where, in November 1941, Nazi officials met to plan the Final Solution to the “Jewish problem.” Finn describes Gertie’s time there but fails to note the paradox of her life of relative luxury in a place so closely associated with the Holocaust.

In fact, while enjoying German hospitality, Gertie seems only vaguely aware of the suffering endured by millions outside her cloistered bubble. The Gestapo even buys her new orange-colored underwear and stockings.

Ultimately, with assistance from sympathetic guards, she escapes to Switzerland, returns to the United States, reunites with her husband, and resumes life at Medway. But when she goes to see her children, they have no idea who she is. The postwar reunion with Sidney is short-lived; he dies in 1948. Gertie, however, lives to be 97, dying in 2000.

In the end, Finn writes, she showers her grandchildren with love and turns Medway into a 7,000-acre nature preserve with strict conservation easements. I suppose there is some redemption there to a life of extreme white privilege that extended to her six months as “a guest of the Reich.”