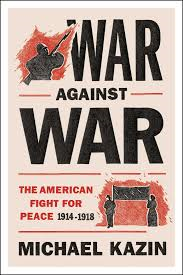 Michael Kazin’s War Against War: The American Fight for Peace 1914-1918 confirms his stature as one of the most astute historians of American 19th- and 20th-century social movements. Equally significant to readers is that the lessons contained in his new book are presciently relevant. Read along with his earlier The Populist Persuasion: An American History, it would serve as a manual for resistance to war in the coming years.

In his new book, Kazin, a professor of history at Georgetown University and editor of Dissent, describes the much-mischaracterized efforts of Americans to stop the United States’ entry into World War I and the governmental oppression that descended on members of the peace movement for not renouncing their beliefs when the nation went to war.

The anti-war forces comprised, according to Kazin,  “the largest, most diverse, and most sophisticated peace coalition to that point in U.S. history. Not until the movement to end the Vietnam War half a century later would there be as large, as influential, and as tactically adroit a campaign against U.S. intervention in another land.”

To tell the story of the movement, Kazin follows four of its participants: Crystal Eastman, Morris Hillquit, Claude Kitchin, and Robert La Follette. They make for an odd quartet. Eastman was a radical suffragette; Hillquit, a founder and leader of the Socialist Party; Kitchin, House majority leader and a pernicious segregationist; and La Follette, one of the leading progressive politicians.

But on this one issue — keeping the United States from entering the Great War — they were on the same side. The one weakness of Kazin’s book is that his four figures come and go, like actors on a stage, leaving the reader wanting to know more about the personal or inner lives of these figures. But that may be too much to ask in a history of this kind.

Kazin also wisely chooses to entertain readers with brief appearances by other figures of the era. Jane Addams, William Jennings Bryan, Charles Edward Russell, and even Leon Trotsky find their way into his tale.

From women’s parades to concert hall rallies, from protest songs (“I didn’t raise my boy to be a soldier”) to productions of The Trojan Women, the anti-war movement widened its circle of inclusion to such a point that Congress was politically hamstrung on war issues, even unable to enlarge the U.S. Army. But like many social movements, according to Kazin, its leaders over time became exhausted and distracted by their own particular causes, weakening the zeal for the coalition’s goals. The Zimmerman telegram and Germany’s unrestricted U-boat campaign in early 1917 triggered a massive shift in public opinion and American entry into the war.

Kazin does not end his valuable book with the collapse of the movement. Rather, he reports how both country and government turned against these activists. Free speech was repressed without compunction and prison terms freely handed out to those activists who refused to cease opposing the war. What Kazin describes in terms of government oppression and spying foreshadows a century of unprincipled conduct by the government against those citizens who resist war-making.

Equally important, War Against War reveals that our nation’s proclivity toward war has rewritten history to describe opposition to entry into World War I as isolationism. As a consequence, Kazin says, “ʽIsolationism’ became a synonym for anyone blind to the dangers of well-armed evils from abroad.” The movement was anything but blind. In fact, Kazin persuasively argues it properly understood the consequence of entering the Great War.

Offering a lesson for today, Kazin says that peace movements are unlike other efforts at social change. They must grow quickly and lure leaders from other movements if they are to succeed, as did the World War I anti-war forces for 51 months until events undid their work.

But Kazin’s book should not be seen merely as the tale of the work and ultimate failure of peace activists. This was the most consequential of debates in the 20th century. Since then, every one of the numerous entries of the United States into war has raised the question that this struggle first brought up.

“Can one preserve a peaceful and democratic society at home,” Kazin asks, “while venturing into the world to kill those whom our leaders designate, rationally or not, as our enemies?” Readers of his War Against War are unlikely to think so.

James McGrath Morris is author of The Ambulance Drivers: Hemingway, Dos Passos, and a Friendship Made and Lost in War, as well as several biographies, including the New York Times bestselling Eye on the Struggle: Ethel Payne, The First Lady of the Black Press and Pulitzer: A Life in Politics, Print, and Power. He has appeared on NPR's All Things Considered, PBS' News Hour, and C-Span's Book TV. He was the founding editor of the monthly Biographer's Craft and has served as both the executive director and president of Biographers International Organization (BIO). Morris lives in Tesuque, New Mexico.

This look at a fascinating subject takes a wrong path.