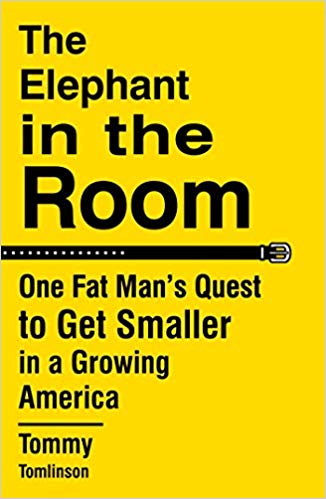 To get one thing out of the way, I myself am a large fellow. Lest one accuse me of insensitivity and fat-shaming, I can report that at 6 feet, 230-something pounds, I know a little about what the author faces. Of course, so do most Americans.

Weighing in at 400-plus pounds, Tommy Tomlinson, a sportswriter and columnist primarily at the Charlotte Observer and ESPN, clearly has a more difficult time than most of us.

The Elephant in the Room is at its strongest and elicits the most empathy when Tomlinson outlines the embarrassments he faces every day. The errand of buying clothing is fraught — he, like others his size, must shop at the kindly named “big and tall” stores, which are populated by people exiled from mainstream clothing outlets. They are “the quietest place I ever shopped — nothing but fat guys and their wives or mamas, everybody’s heads dipped in shame.”

It’s ironic that in a society so fashion and beauty obsessed, there is both an ample need for and a ready supply of stores that don’t fit the “norm.”

Likewise, at the fast-food joints where he gets his fix, the sheer volume of his order causes him to self-isolate. Rather than eat inside, he uses the drive-thru and stays in the parking lot:

“That’s where the junkies hang out. Alone in your car, you can get the double Whopper and the onion rings and the chocolate shake, and nobody knows but the cashier who hands you the bag.”

Tomlinson’s words ring true for those of us (perhaps even the majority of his readers) who have hidden their eating habits. He probably shouldn’t feel too much shame, though, as even the healthiest fast-food options are poor choices. Can his selections really be that much worse?

Tomlinson’s size leaves him vulnerable and lonely, even in a crowd. He writes, “I just can’t shake the feeling that I’m in the way.” As people of size navigate through society, it’s as if they can’t get out of their own way — or away from the idealized images they’re faced with.

So who’s to blame for his circumstances? Is it his beloved father, who plied him with fatty, unhealthy food? Or is it a society of “easy and cheap junk food”? Maybe is it Tomlinson himself, who perpetuates a cycle of immaturity he can’t shake: “Something deep inside of me refuses to grow up,” he writes.

Tomlinson’s doctor tells him, “Ninety-one percent of people who are overweight end up getting larger instead of smaller.” He reports that “seventy-nine million American adults — forty percent of women, and thirty-five percent of men — qualify as obese.”

So who needs to adapt: Tomlinson or the world? He ultimately concludes that it is he. Accepting his weight “feels like giving myself permission to live the life that’s destroying me. The world doesn’t fit me because I’m not supposed to be this big.”

Tomlinson draws us into his struggle throughout the book. So many of us face the day-to-day challenge of making healthy food choices when there are abundant super-sized options that tempt us. Other than the scale of his weight problem, he could be describing most people.

If there’s a fault to this book, it’s that Tomlinson spends too much time on extraneous asides and exposition that really don’t advance his story. Perhaps he intends to demonstrate the underlying emotional conflicts that drive him to eat, but it often feels bloated.

As we reach the end, we find ourselves rooting for Tomlinson and, by extension, ourselves. We hope he can lose the weight and keep it off. In a postscript, he reports that he has lost more than 80 pounds over three years, which is wonderful. He remains, however, well over 300 pounds.

His fight continues, as does ours.