Waging a Good War: A Military History of the Civil Rights Movement, 1954-1968 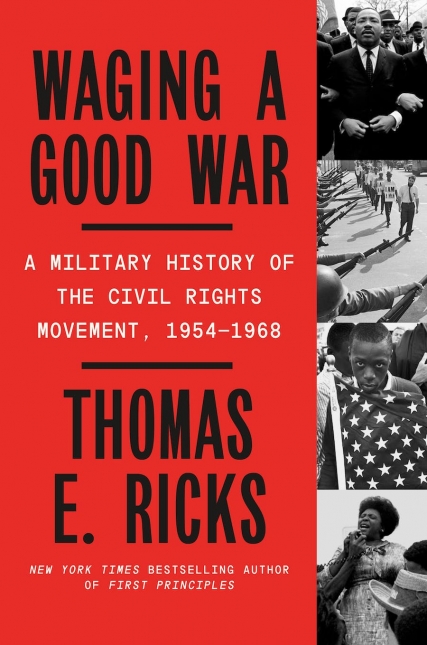 The Civil Rights Movement does not lack for published histories of the era that challenged and brought down long-enshrined laws and ingrained customs of racial segregation. The genre has virtually exploded since the Black Lives Matter protests over police killings of unarmed Black men and women. Kid lit and young-adult books on the subject have also proliferated.

Seminal works like Richard Kluger’s Simple Justice, about the decades-long struggle to end school segregation, and Taylor Branch’s comprehensive three-volume history of the movement in the 1950s and 1960s are still available and accessible, but they are, let’s face it, history.

The question arises: What different view might emerge from fresh eyes on the prize? And can one bring a novel perspective to a subject so well covered? Bestselling author and military historian Thomas E. Ricks attempts this latter feat in his new book, Waging a Good War: A Military History of the Civil Rights Movement, 1954-1968.

Ricks, as the author himself acknowledges, is a military historian, and as such, is an outsider to the subject of civil rights. “But I think,” he avers, “that my decades of experience in witnessing, analyzing and writing about American military operations enable me to write about the Movement in a new way that can deepen our understanding.” A military perspective is essential, he argues, to fully understand the workings of the movement.

As in the military, there is strategy — overarching and intended to achieve a greater goal — and there are tactics, specific ways to implement the strategy. He views the movement essentially as a series of “campaigns,” each with its own generals and foot soldiers who were more or less to follow the orders of their leaders. In military terms, Ricks compares the 1961 Freedom Rides to a “long-range raid behind enemy lines.”

The “Movement” (always capitalized when he writes it) was creative but not spontaneous. The Montgomery bus boycott, for example, was not sparked by the unplanned refusal of Rosa Parks to give up her seat to a white passenger but grew instead out of careful training at the Highland Folk School in eastern Tennessee. Civil rights leaders had rejected as a test case the first woman who’d acted with similar conscience and bravery because she was an unmarried, pregnant teenager. Not a good look. The choice of Parks was “purposeful” and “strategic.”

Ricks challenges the mythology of the movement as an organic response to deep-seated injustice. Rather, he writes, it was “better organized and its participants far more methodical and careful than tends to be recognized.” Underlying its successes was what Mahatma Gandhi, Indian nationalist and preacher of non-violent protest, demanded: “There is no civil disobedience possible, until the crowds behave like disciplined soldiers.”

Not only the crowds — the foot soldiers — but the generals must display similar qualities. In this, there were both movement successes and failures. The August 1963 March on Washington succeeded in part because Black World War II veterans — acting as squad leaders — kept the crowds in line, defying dire predictions, even within the Kennedy White House, of chaos and racial violence.

But movement leaders did not always display the qualities they demanded of others. Ricks takes us inside the often tense, sometimes fractious inner circle of civil rights leadership. Nor does he sugarcoat the sexism in the movement. Mississippian Fannie Lou Hamer, for one, although canonized posthumously, “gave all to everyone but felt unloved.”

The movement also took a toll on its foot soldiers, who were repeatedly beaten and jailed. The stress of 200 days of fighting “at the front” caused many to suffer, like war veterans, from PTSD.

Chapter by chapter, Ricks takes us from Birmingham to Memphis, from the bus boycott to the assassination of Martin Luther King Jr. amid a sanitation-workers strike that had devolved into the opposite of the disciplined action Gandhi had demanded. The tragedy serves to reinforce the author’s central thesis: The path to victory is not just militant but military.

King, of course, features prominently in Ricks’ book, but there are many others. He likens Black minister James Bevel, a lesser-known movement strategist, to William Tecumseh Sherman, the Union general who was “volatile, even a little insane at times” but “far ahead of his peers.”

Just as Sherman invented a new way to wage war, “crossing Georgia without logistical support or even a line of communications,” Bevel devised “a risky new approach to civil rights marches that shocked some yet proved essential to the movement’s single biggest victory” after a confrontational campaign in Birmingham in 1963.

Among other strategic moves, Bevel recruited children to march and take the blows from police boss Bull Connor and his thuggish deputies. The images of police turning fire hoses and attack dogs on children shocked the nation. Bevel and his young warriors thus won “control of the narrative.” It was, Ricks writes, “the nonviolent equivalent of holding the initiative in war.”

This daring tactic cowed the white business establishment. Henceforth, all downtown lunch counters and bathrooms would be desegregated, a few Black salesclerks would be hired, and a biracial committee on school desegregation was formed. The last, Ricks explains, was “a slight compromise…[that]…follows a rule of warfare of allowing your enemy an avenue for retreat.”

What lessons are we to learn from Ricks’ military analysis of the Civil Rights Movement? It may be that any political movement lacking an all-encompassing strategy and specific tactics is likely to fail. Conversely, those skillfully employing his prescribed roadmap may succeed. But such action can be applied by dictators as well as democrats. Philosophy, perhaps even more than strategy and tactics, must underpin any movement for change.

In his preface and epilogue, Ricks addresses the current state of the nation since the attempt to overturn the results of the 2020 presidential election and the Jan. 6th mob attack on the U.S. Capitol. The same forces that fought the Civil Rights Movement in the 1950s and 1960s, he says, seem resurgent. “The question facing us,” he writes, “is whether those antidemocratic forces will once again defeat the forces of democracy.”

Despite sweeping new voter-suppression laws, police shootings of unarmed people of color, and legislative and judicial efforts to roll back rights long taken for granted, Ricks is cautiously hopeful. Even though “the entire society seems on edge...and democracy itself threatened,” the country “locked in a downward spiral,” the author thinks it’s still possible “to reverse our direction and complete a second civil rights movement” utilizing the military playbook to “organize, train, plan, and reconcile.”

It’s an optimism that some — but perhaps not all — readers will share.

Eugene L. Meyer, a member of the board of the Independent, is a journalist and author, among other books, of Hidden Maryland: In Search of America in Miniature and Five for Freedom: The African American Soldiers in John Brown's Army. Meyer has been featured in the Biographers International Organization’s podcast series.