An intelligent, valuable political history from south of the border. 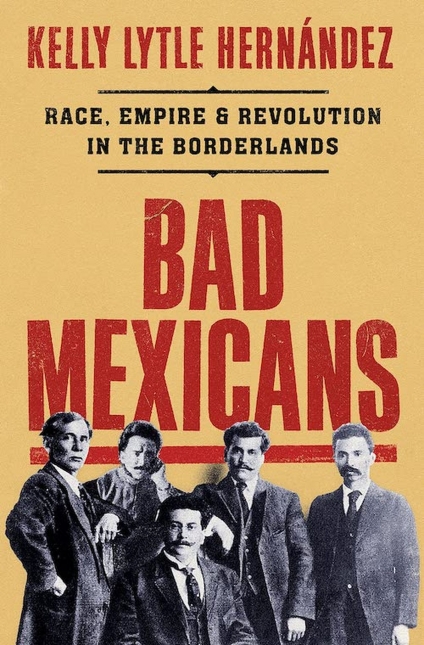 It may seem a truism that the histories of the U.S. and Mexico are intertwined (after all, much of this country once belonged to Mexico), yet most Americans are ignorant of this integral part of our past.

In her eye-opening Bad Mexicans, Kelly Lytle Hernández seeks to raise awareness of this connection through her account of the Mexican Revolution of 1910-1920. There was, in fact, a considerable U.S. component to the revolution: U.S. officials and capitalists were complicit in driving Mexican discontent, while the revolution was planned in large part by Mexican exiles here (the term “Bad Mexicans” was coined by then Mexican president Porfirio Díaz to describe these exiles).

And the United States itself would be transformed by the revolution — from economic and societal changes catalyzed by an influx of Mexican refugees to the creation of the FBI (originally tasked with tracking the Mexican dissidents).

In 1910, Díaz had de-facto ruled Mexico for three-and-a-half decades. Having ascended from a poverty-stricken youth to the presidency by virtue of charisma, military bravery, and promises to uphold the Mexican constitution, he conducted an “honorable tyranny” under which Mexico modernized its economy and strengthened relations with the United States.

This was a deal with the devil, however. Díaz stayed in power by manipulating provisions of the Mexican constitution, such as the one forbidding re-election. Meanwhile, both economic progress and the cozy relationship with America were inextricably linked with wholesale U.S. takeovers of Mexican railroads, mining, oil extraction, and agriculture. The accompanying land grab left “millions of Mexicans, including 98 percent of Mexico’s rural families and Indigenous communities…landless, while a small cohort of foreign investors grew wealthy.”

By the early 20th century, many Mexicans had had enough. One was Ricardo Flores Magón, a young journalist who launched the anti-Díaz newspaper Regeneración. In contrast to other would-be reformers, Flores Magón did not mince words about the corruption of the Díaz regime. He thus “[tore] the veil of legitimacy covering Díaz’s long, harsh rule, and there would be no looking away, no turning back. Mexico was on the road to revolution.”

The resultant crackdown forced Flores Magón and others to flee for the United States, where they resumed publication of Regeneración and established the anti-Díaz political party Partido Liberal Mexicano (PLM).

These so-called magonistas also spent a great deal of time on the run: In one of the most disquieting parts of this story, the U.S. president, the Departments of War, Justice, Commerce and Labor, and Treasury, the U.S. Postal Service, the Arizona and Texas rangers, and myriad extra-legal vigilantes were at various times complicit in the pursuit, incarceration, deportation, and murder of Mexicans and Mexican Americans — all in the name of protecting sizable U.S. interests south of the border.

But the U.S.-Mexican relationship that had held Díaz up was breaking down. A 1906 strike at a U.S.-owned mine spurred American incursions into Mexico and raised questions on the Mexican side about whether its sovereignty was under threat. A 1910 lynching of a Mexican American in Texas generated massive protests on both sides of the border against the “unchecked power of U.S. citizens…over Mexican lands and lives.”

Díaz’s nationalizing of large swaths of the Mexican economy cost him powerful U.S. supporters. A series of articles by an American journalist detailing brutal slave labor in the production of Mexican-origin goods for the U.S. market provoked a public backlash in the United States. And a congressional hearing on U.S. government involvement in Díaz’s campaign against the magonistas shone an ugly light on U.S.-Mexican cronyism.

Diaz’s new vulnerability came as magonistas successfully attacked his forces across northern Mexico. The loss of a 1911 battle in Ciudad Juárez finally forced him out of office. Mexicans hardly lived happily ever after, however.

There followed a protracted and bloody civil war, a couple of U.S. invasions, the assassination of first post-Díaz president Francisco Madero (himself a magonista), and election of a new U.S.-friendly Mexican president who arrested or killed anyone suspected of participating in a supposed plot against white settlers in Texas. The “plot” also served as the excuse for a mass slaughter of Mexicans and Mexican Americans in the United States.

Here arise questions that the book does not answer. First, the grimness of post-revolutionary Mexico might spur the reader to ask what precisely had changed as a result of the magonistas’ bloodshed and sacrifice. It would have been helpful if the author had provided a brief explanation.

And the reader can admire Flores Magón’s role as “the intellectual author” of the Mexican Revolution while still questioning why he gets so much ink in this book (even Hernández asks “whether there would have been a Flores Magón movement” without the efforts of fellow magonista Práxidis Guerrero).

By 1910, Magón’s relevance to the cause seems to have diminished along with his grip on reality (his assertion that Mexicans would spontaneously rise up once the PLM had “lit the spark” proved disastrously wrong), while he excoriated those actually conducting the revolution for their lack of ideological purity. The targets of his wrath included Madero, who showed great bravery in fighting for Díaz’s ouster.

These issues aside, Kelly Lytle Hernández’s book is a compelling introduction to Mexican history and a bracing corrective to the less-than-informed discourse surrounding the U.S.-Mexico relationship and the role of Mexican Americans in U.S. society and history. By providing greater historical context and understanding, she has done a considerable service.