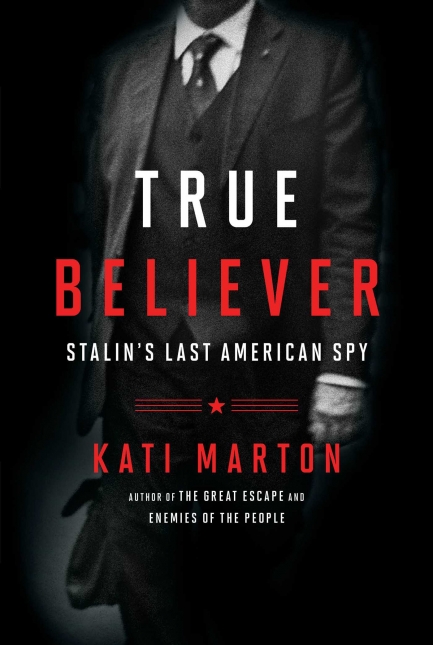 Kati Marton’s True Believer is a true story of intrigue, treachery, murder, torture, fascism, and an unshakable faith in the ideals of Communism.

Born in London in 1904, Noel Field was the son of a Harvard-trained American biologist. His father was a Quaker pacifist living and working abroad. Noel admired his father’s love of Harvard and he cherished their Quaker roots. At age 14, when a family friend, Allen Dulles, was the Fields’ luncheon guest in Zurich, Noel boldly stated his purpose in life: “To bring peace to the world.” He spent his entire life trying to do exactly that, but in his own unique fashion

The family lived in London and Zurich during Noel’s early years. When his father suddenly died of a heart attack in 1921, the family returned to the U.S. Noel entered Harvard the next year. As a lonely stranger in his new land, he resented the elitism of this institution his father so loved. In his isolation, he devoted himself entirely to study and achievement. A brilliant student, he earned a degree with full academic honors in only two years. Fluent in several languages, he took a job as a foreign services officer for the U.S. Department of State.

Working in the international arena after World War I, Noel was deeply troubled by the emergence of fascism in Europe. At the same time, he could not ignore the horrors of what he saw in the United States: depression, segregation, and the do-nothing Coolidge presidency. He became enamored with the humanity of socialism and admired the communist fight against fascism. Noel saw early communism as the only hope for the poor and abused suffering from the worldwide depression and capitalist exploitation.

Noel’s anti-fascism and his growing disillusionment with democracy and capitalism drew him to the Soviet underground. Though he never joined the Communist Party, he embraced its ideas and began trying to implement them. He worked with and socialized with other Ivy League elites at State, some of whom were or became known communists, such as Alger Hiss, Whittaker Chambers, and Lawrence Duggan.

Marton characterizes Noel’s activities as spying for the Soviets. He delivered classified documents to agents for copying, and followed directions from a communist handler. The author believes that Noel rationalized his conduct as a stand against fascism, while promoting the benefits of socialism and communism.

Near the end of the Spanish Civil War, Noel was transferred and went to work for the League of Nations to assist fleeing refugees. The League’s stated instruction was to arrange the “orderly repatriation” of the 35,000 volunteers of the International Brigade. This was an exhausting and dangerous job, but Noel described it as the “happiest time” of his life.

During World War II, Noel became an employee of the Boston-based Unitarian Universalist Service Committee (UUSC) in France and Switzerland. He performed humanitarian work while emphasizing assistance to Jewish communists and anti-fascists refugees.

While his aid was noble and lifesaving, his main focus was to assist communists. He wanted to return his fellow travelers to their native lands in order to prepare a cadre for the expected communist takeover after the war. Unfortunately, his job description was to help all refugees and not just his favorites. When Boston’s UUSC learned of his uneven actions, he was fired.

Noel remained in Europe and continued to work for several communist agents. At that time, Stalin was conducting show trials of alleged spies and his “enemies.” In 1949, the Soviets arrested Noel in Prague. He was taken to a famous prison in Hungary and tortured. There he remained for years without trial. He was finally released and given a high-paying job as amends; he and his wife lived out their lives as wealthy and privileged residents of Budapest. He never returned to the United States.

Despite all this hardship, Noel remained loyal to the communist “cause” and never publically denounced Stalin or the system. He even said he believed that his arrest and harsh treatment in prison were justified. This true believer never abandoned his role and belief in the communist promise.

The story jumps around a good deal, mixing interesting vignettes of history with the story of Noel, the spy business, and the Field family. Marton is somewhat sympathetic to Noel and seems to rationalize his conduct as almost innocent idealism. Despite his treasonous activities, she presents him as a naïve believer in a brave new world.

We do not know how much harm Noel actually caused. As is the nature of many “classified documents,” the information he provided to the Soviets may have been harmless or already known. Because of his long relationship with Allen Dulles (OSS and later CIA chief), there is also a suspicion that Noel may have been a double agent.

True Believer is short, quick, and exciting to read, a fresh take on espionage activities from a critical period of history.

Paul D. Pearlstein is a writer, a musician, and a lawyer in repose.

Why Religion? A Personal Story