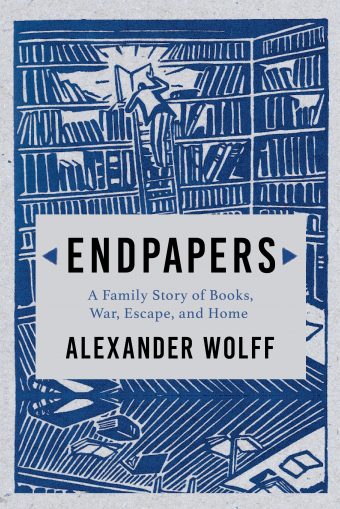 Endpapers is the centuries-spanning true story of a German American family tainted by its ties to the Nazis. The most important people portrayed are the author’s grandfather, Kurt Wolff, and his father, Niko Wolff. But along the way, the reader meets nearly 40 other relatives, including Kurt’s first wife, Elisabeth Merck, a member of the prominent family that owned the multinational pharmaceutical corporation Merck & Company.

The Mercks, like the Wolffs, were implicated in the Holocaust, and much of Endpapers deals with the efforts of both families to come to terms with their history of cooperation with Hitler. Although the author soft-pedals the money issue, the Wolffs and the Mercks were wealthy, and it was their affluence that allowed them to establish roots in the U.S. before, during, and especially after World War II.

A knowledge of German will help the reader get through Endpapers, as German words and phrases are scattered throughout. Most of the time, author Alexander Wolff offers a translation when an unfamiliar term first appears. At other times, he uses German without providing the English equivalent, presumably assuming the words are so well known that no translation is required.

Regardless, Endpapers made me understand in a new way the profound effect Naziism had on the world in the 1930s and 1940s, an influence that continues to reverberate today. The murder of 6 million Jews and others was a monstrosity unequaled in modern times. That the Third Reich could ever have come to power offers warnings we must bear in mind about our own country even — or maybe especially — in the 21st century.

The overwhelmingly dominant figure in the book is Kurt Wolff. Born in 1887 in Bonn into a German Jewish family, he fled Germany in 1933, eventually moving to the U.S., where he lived until his death in 1963. In 1942, he and his second wife, Helen, founded Pantheon Books. They later ran the Helen and Kurt Wolff Books imprint at Harcourt Brace Jovanovich. Among the writers Kurt Wolff nurtured and published were Franz Kafka, Boris Pasternak, Günter Grass, Paul Valéry, Julian Green, Giuseppe Lampedusa, and Anne Morrow Lindbergh.

Kurt’s son Niko, the author’s father, remained in Germany. He lived in Munich with his mother and sister and fought for the Nazis as a member of the Wehrmacht. After the war, he immigrated to the U.S., where he was never able to completely come to terms with his Nazi past.

The cover image of Endpapers — a blue-and-white drawing of a man on a ladder in a library — is the same one used for Almanac of Art and Poetry, published by Kurt Wolff in 1927. It’s fitting that Alexander Wolff should copy a book cover from the man he lionizes.

Endpapers, the result of the author’s yearlong stay in Berlin studying thousands of family letters and records, employs a design I wish more writers would use: inserting relevant photographs into the text at the point where they are referenced. This is far better than the more common practice of bunching photos together in the middle of a book.

I became impatient with Wolff’s writing at various points. Too often, he chose unduly complex ways of expressing ordinary ideas. My preference, both as a reader and a writer, is for simplicity. And even though Endpapers was written in part during the Trump administration, Wolff mentions the former president only in passing. (His comparison of Trump’s moves to early Nazi actions is not flattering.)

That said, Endpapers is a worthwhile read and certainly sheds light on the lingering predicament of some German American families and the enduring stain of the Holocaust. Most moving to me was the last passage Kurt Wolff entered in his commonplace book not long before his death. It is attributed variously, according to the author, to Stephen Greller and William Penn:

“I shall pass through this world but once
Any good thing, therefore, that I can do
Any kindness I can show to any human being,
Let me do it now.
Let me not defer it nor neglect it,
For I shall not pass this way again.”

My Grandfather Would Have Shot Me: A Black Woman Discovers Her Family’s Nazi Past

By Jennifer Teege and Nikola Sellmair

The author struggles to reconcile fond memories of her grandma with that woman's love of a mass murderer.