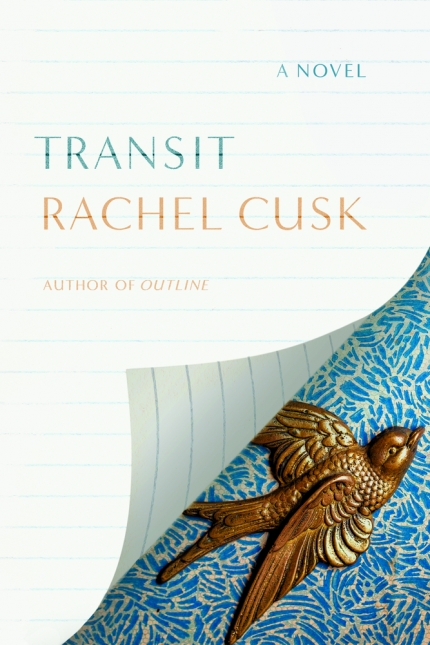 When we meet, once again, with the almost nameless narrator from Rachel Cusk’s 2015 novel, Outline, she has bought a dilapidated apartment in a desirable neighborhood in London, something of a metaphor for the state of her life.

As the title of this second novel of a trilogy makes clear, she is in Transit. Emerging from the shattering existential crisis of the dissolution of her marriage, she is now ready to reclaim her identity, take risks, and start the messy business of living again.

As in the first novel, people disgorge their stories to her like penitents in confession, revealing their painful pasts, innermost secrets, vulnerabilities, and philosophical musings on life journeys. But the conversations are no longer one-sided; she is now an equal partner, offering up her own personal experiences, allowing the reader to fill in the silhouette that emerged in Outline. While readers still have little idea of what she looks like or how she dresses, as well as other details that make up a character, there are tantalizing glimpses into both her past and personality.

Still struggling with the repercussions of leaving her husband, the narrator is ready for introspection, musing, “When people freed themselves they usually forced change on everyone else.”

In the case of divorce, it is the children who bear the brunt. Her sons (nameless, as is her ex-husband) have gone to stay with their father while her apartment is being renovated and briefly break into the narrative when she talks with them over the phone. She usually has to cut them short to return to the conversation she is having with someone else, except for their last, shocking call, which hints at why the narrator left her and what sort of man her ex-husband is.

Whereas many of the discussions in Outline were about the mystery of marriage and the many reasons that institution fails, her Transit interlocutors — an ex-lover, the laborers remodeling her apartment, an old friend, guests at a dinner party — muse on how their pasts have shaped them, why “people only want what it is not certain they can have,” and how “none of us could ever know what was true and what wasn’t. And no examination of events, even long afterwards, was entirely stable.”

What could be excruciating navel-gazing by a cast of mostly upper-middle class white Brits is instead a revealing, gently sardonic glimpse into the emotional lives of intelligent, articulate, yet stultified adults. Though they have all the trappings of adulthood — jobs, homes, families, and tangled pasts — Cusk repeatedly compares them to children.

Her builder has “a baby’s face in the moments before it beings to cry.” Her hairdresser said there was a period when he was “plagued by this sense of [everyone he met] as children in adult’s bodies.” An old friend “had a youthful appearance on which the patina of age was clumsily applied, as if, rather than growing older, she had merely been carelessly handled, like a crumpled photograph of a child.” They are children trapped in adult bodies, yet to transition into maturity.

Except for her downstairs, working-class neighbors, the narrator does not pass judgment on others. She listens as they reveal the most intimate details to her, and it is through their own words and the tangential descriptions — what they wear, how they eat, how they deal with their kids —that the reader comes to her own conclusions.

Perhaps the reason these two novels are so powerful is not that Cusk escapes the boundaries of the traditional novel — leaving her first-person narrator somewhat blank, relying upon reported action, introducing a constantly changing cast of characters who appear only once — but because she is claiming the territory that once was the purview of aggressively male authors like Philip Roth, Saul Bellow, and John Updike.

Cusk writes with the same pitiless, probing eye, the same transcendent, perfectly controlled prose as these Great Male Narcissists, but from a feminine viewpoint that is not fatally weakened by a fear of women. While the penis-gazers relegate the other half of humanity to mere symbolic vessels of their desire and convenient foils to their own weaknesses, Cusk has no such blind spots, and therefore casts a clearer and bolder eye upon the world.

Cusk, like fellow European feminist Elena Ferrante, has broken the bondage of the male point of view, but whereas Ferrante is a bare-knuckle brawler, Cusk takes a less confrontational, more bloodless approach.

Which is not to say that her prose is devoid of passion, for Cusk’s “native habit of finding metaphors and similes in unlikely places” makes her writing pulse with relevance and meaning, while changing the paradigm of literature.

In the final chapter, after a harrowing, slightly ominous dinner party where parents mold their children into their own image by giving them too many choices and making them cry, the narrator “felt change far beneath me, moving deep beneath the surface of things, like the plates of the earth blindly moving in their black traces.”

She leaves us there, waiting for her return, confident that when we next meet her, she will have completed her metamorphosis. I can’t wait to encounter her again, and maybe for the first time.

The Elephant of Belfast: A Novel