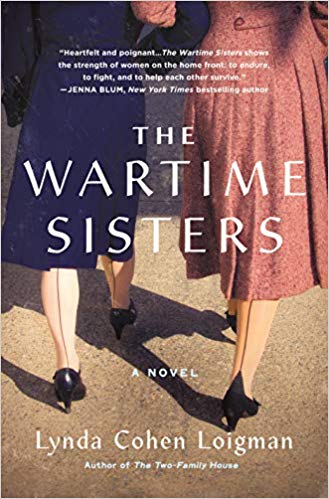 The title of Lynda Cohen Loigman’s new novel, The Wartime Sisters, has two dimensions. The more obvious is the horribly strained relationship between two sisters, Ruth and Millie Kaplan. The other is the wider sisterhood of women who toiled in preparing the U.S. to enter WWII and during the war years that followed. These are women who had factory jobs or positions, clerical and otherwise, that supported the manufacture of weapons.

The Brooklyn-born Kaplans, first Ruth and, later, Millie (the younger by three years), relocate to Springfield, Massachusetts, to rebuild their lives after shaky, if conventional, beginnings.

They seem to have been the victims of unrealistic expectations and misguided parenting. Ruth’s controlling nature, an echo of their mother’s, leaves Millie feeling demeaned and marginalized. More open and spontaneous, Millie’s attractiveness to people, especially to boys and then men, is a constant threat and humiliation to Ruth.

The narrative is structured to oscillate among three kinds of scenes: Scenes that give an overview of their early years; scenes set in Springfield that reveal the sisters as young adults making their separate ways in the world; and scenes reverting back to more detailed Brooklyn episodes that explore the seeds of conflict and unwise decision-making that continue to have consequences in their new environment.

Loigman further complicates the bond between the sisters through the jobs they have in Springfield. Ruth does paperwork, and Millie puts triggers together on the assembly line. From Ruth’s perspective, Millie is trouble — a person who always needs looking after. Ruth had enough of that unwanted responsibility as a girl; she doesn’t want it now as a married woman raising children — especially when her husband is called away from his position at the Armory to dangerous duty in Europe.

But back in Brooklyn, Millie was rather desperate. She was alone in the wake of their parents’ death in an accident, and her ill-fated marriage left her a victim of abuse. Maybe Springfield will supply an answer, whether it be via Ruth or in some other way.

The war between the sisters is carefully orchestrated and is the central action that holds readers glued to the story. However, the portrait of the Springfield Armory community is also a major achievement. Persuasively imagined over a framework of impressive research, the sights, sounds, and patriotic flourishes of its residents during 1942 and 1943 leave readers with a sense of pride.

However, all is not well in this capital of wartime industry. Questions of social and economic justice loom.

The larger meaning of “sisters” derives from the group effort of the women laboring through the war build-up. Their symbolic representatives are two natural leaders. One is Lillian, whose husband holds a major post at the Armory. Though she had known suffering in her youth, she is now an active contributor whose tonic boosterism rallies the women to unexpected friendships and levels of performance. She is a good organizer and a prudent giver.

Arietta, of Italian heritage, has substantial training and skill as a singer. However, she pays her bills by being a cook at the Armory. She cleverly enhances the workers’ menus and offers an optimistic response to most of the hardships and worries of the other women. Like Lillian, she is of comfort to Millie when Ruth is unwilling or unable to address Millie’s needs.

Lillian and Arietta are both motherly and sisterly. Grace, on the other hand, is a tyrant. A woman of influence, she threatens workers who, in the standards set by her own prejudiced mind, don’t belong. Out of sheer hostility, she accuses Arietta, who can manifest a flamboyant style, of having poisoned food to undermine the war effort.

It’s likely that Ruth and Millie don’t belong in Grace’s world because they are Jewish. The author maintains a thread of interest about the sisters’ Jewish identity throughout the novel. Though primarily gastronomical and holiday-oriented, details about their Jewish consciousness add another dimension to their personalities and outlooks.

Though “melodramatic” is often used in a pejorative sense, it’s a term that works well to characterize The Wartime Sisters. The novel has a theatrical feel, often choosing dialogue as its primary storytelling tool. The narrative certainly will stir readers’ imaginations and emotions. Moreover, Lynda Cohen Loigman’s portrait of the Springfield Armory complex as a physical and sociological environment is superb.

This much-anticipated follow-up novel falls far short of its predecessor.