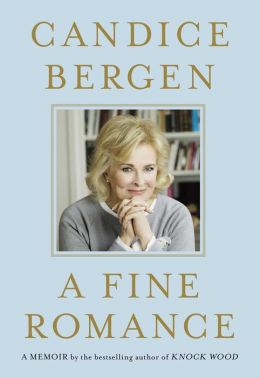 Since the beginning of show business, it has often been reported that actors — once they have summited to success — have splendidly superb lives.

That myth continues to be manipulated for the markets and mankind, but Candice Bergen’s second memoir, A Fine Romance, unclothes it. This is a famous and fortunate woman whose triumphs have, at times, been leveled by troubled love and tragedy.

Bergen is the daughter of the renowned actor-comedian-ventriloquist Edgar Bergen, an amiable but odd man who unintentionally withheld affection from his children in favor of his wooden dummy, Charlie McCarthy, which was rewarded with the better bedroom and perpetual recognition — so much so that McCarthy was included in Edgar Bergen’s will:

“I, Edgar Bergen give and bequeath…Ten Thousand dollars to be held as a separate fund, to be forever known as ‘The Charlie McCarthy Fund’…I make this provision for sentimental reasons which to me are vital due to the association with Charlie McCarthy (the dummy) who has been my constant companion and who has taken on the character of a real person from whom I have never been separated even for a day.”

As his daughter writes, “Charlie was included in the will. I was not. I’d chased my father’s approval all my life and here was proof I’d never get it.”

Bergen might not have been emotionally generous, but he encouraged his daughter’s education and precocious career opportunities. At 19, she had her film debut in “The Group.” She then advanced to “The Sand Pebbles,” “The Adventurers,” “Carnal Knowledge,” and “The Wind and the Lion,” with Steve McQueen, Charles Aznavour, Jack Nicholson, and Sean Connery, respectively. Later, she garnered an Academy Award nomination for “Starting Over.”

Along with diverse movie roles, Bergen was a cosmopolitan photojournalist for Esquire magazine with no particular desire to marry. Then, at 34, she met Louis Malle, the French director of “A Very Private Affair,” “Murmur of the Heart,” “Pretty Baby,” and “Atlantic City.” His oeuvre captivated America, catapulted the popularity of European cinema, widened his arc of influence, and repositioned Bergen into a romantic.

“The man I married was, in every sense, a dynamo. Louis had almost boundless stamina and energy, and he had infinite curiosity about everything,” Bergen writes. “He was compulsively creative and productive; if he wasn’t shooting a feature, he was shooting a documentary or directing a play…He could be so charming, incredibly courtly. He would kiss women’s hands on meeting them. I thought Mom would faint when he kissed hers. ‘Oh, Candy, can’t you marry him?’ she asked me later. And now I had.”

Malle’s doting devotion, however, came coated with conflict. He adored his wife and their daughter, Chloe, but the combustion within to create was more compelling than his affection. It was an eerie déjà vu of the emotional ambivalence Bergen received from her father.

Malle commuted endlessly between France, Los Angeles, and New York — altogether, five out of the 15 years of marriage, according to Bergen. Still, the household tolerated the disruptions, but the three alliances pivoted precariously — and nearly capsized.

“The separations were very hard on us. My brother became the de facto father figure for Chloe in Louis’s long absences, and Chloe worshipped him. When Louis came home, they instinctively…concealed the depth of their relationship…so as to not hurt him,” Bergen writes.

“Chloe learned to protect herself from the sudden appearance and disappearance of her father. She put an invisible governor on her feelings, kept her distance from him. The first few days he was back were always the hardest. When Chloe and I were alone in LA, which was often, we had our rituals. She’d sleep with me…we’d have Date Nights where we’d get our dinner on trays, light the fire, and watch ‘Sleeping Beauty’ or ‘Cinderella’…and it was bliss. Louis’s arrival always interrupted ‘the Two of Us.’ Chloe resented Louis’s sudden reappearances; he had to win her over every time.”

Bergen, meanwhile, had begun to work regularly. When her television show, “Murphy Brown,” appeared in 1988, it aroused a sizable audience, pushed up her prominence, flattened Malle’s, and occasionally souped up conjugal conflict.

Thirteen years into their union, Malle was diagnosed with PML — an uncommon inflammation of the brain: “Chloe, who had never been that close to her father, knew that she should take care of him out of duty. I never asked her to. This little nine-year-old would read to him, feed him, and bring him funny things that he’d love.”

Despite the illness, Malle continued to travel, resolutely; he looked over prospective locations and hired crews even as he scuffled to expunge the ponderous progression of the disabling disease. “Vanya on 42nd Street,” made in 1994, was his 33rd picture — and denouement. He died in 1995.

In 2000, Bergen remarried, this time to Marshall Rose, a New York businessman who was quite in love with her. But Rose, a devotee of a structured, predictable schedule, was unfamiliar with Hollywood and horrified by the hours the "Biz" could require of Bergen. Getting to “a fine romance” would require crucial reshaping of their relationship — especially for an accommodating woman accustomed to less.

The World According to Tom Hanks: The Life, the Obsessions, the Good Deeds of America’s Most Decent Guy

Is the beloved actor really all that great? (Spoiler alert: yes.)