This Town: Two Parties and a Funeral — Plus, Plenty of Valet Parking! — in America’s Gilded Capital

The journalist delivers a clever blend of juicy dish and smart sociology in describing the most powerful city on earth. 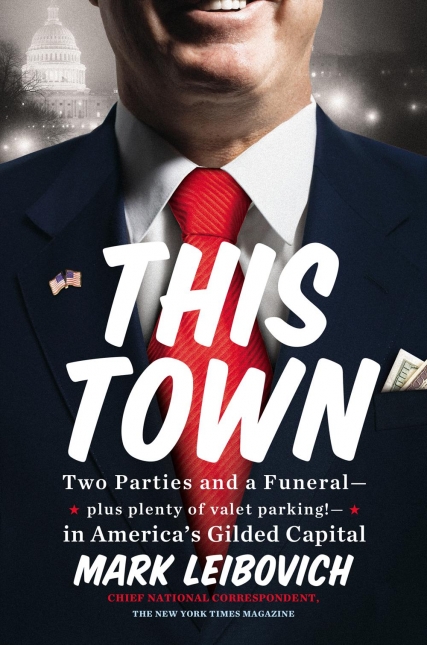 Years ago, in a lecture to an undergraduate political science class, I told the students that I was going to provide them with an insight into a feature of Washington politics that academics might miss. The subject was LUNCH, and how the real business of the nation’s capital took place informally between “players” over lunch. Duke Zeibert’s hostelry then, not the Senate dining room, was where things got done. Politicians, lawyers, media folk came regularly, sat at tables that Duke assigned according to his perceptive sense of who counted and in what pecking order, and whether they needed to be seen or placed at a quiet reserve.

Deals were made over Duke’s generously laden platters and sandwiches. Larry King had his special table, and his special diet requirements were met. Ed Williams and other power brokers of that era were hustled past the line of waiting diners by the obsequious host. What a great scene.

Mark Leibovich’s This Town: Two Parties and a Funeral — Plus, Plenty of Valet Parking! — in America’s Gilded Capital ought to be required reading in similar schooling precincts. With his inside experience, dripping with wit, sarcasm and cynicism, he exposes how the “town” unofficially works. His book cleverly blends juicy dish with smart sociology describing the most powerful city on earth. In a fast-paced, entertaining style, he switches between wise guy and wise man, using telling vignettes and mini-biographies to capture the action and place with amusing and unerring insights.

Were author Leibovich to teach a course on the unofficial real politics of Washington, he could adopt the course syllabus from his book.

Session I – The Place:

Washington, DC, is a TOWN, within a city, and the two have little beyond geography in common. The national legislature is here, but residents can’t vote. The federal government is mostly white; DC, the city, is mostly black, especially if you exclude temporary residents here to serve in government. As Leibovich notes, “Washington is a ‘real city,’ but this town is a state of belonging, a status, a commodity,” a “small town and interlocking power structure.”

Leibovich tells breathtaking stories of people coming to government only to “monetize” the experience by becoming foxes in the regulatory and legislative chicken coop. The point isn’t new, but the stories leave readers cynical, if not depressed. He takes the story through term one of the Obama Administration, which promised this practice would change, and shows that it hasn’t. Political philosopher Sarah Palin jabs reformers, embarrassing them by asking if they are now okay with all the “hopey, changey” action going on. Or, as another political philosopher admitted, “Oops!”

Besides explaining the source of the term lobbyist, Leibovich provides stories that ought to make grown people cry. Lobbying is a $4 billion business. “Now 50 percent of senators and 42 percent of congressmen” become lobbyists upon leaving office; the figures for executive officials are not available. Of Leibovich’s examples, classic is Dick Gephardt, who switched his support for the Armenians while he was in Congress to the Turks when he left public office, and became a lobbyist “to work on i$$ues he was pa$$ionate about.” A generous monthly stipend changes one’s view of genocide, Leibovich posits.

The permanent power source. Leibovich opens his book with a description of Tim Russert’s funeral, a classic study of the workings of what he calls “suck up city.” Russert was a good journalist, but I did wonder at the time about the extent and degree of memorials that went on for a week after he died. Leibovich explains why and how this works. (He does so again describing the same scene when Richard Holbrooke died. Holbrooke wasn’t as universally beloved as Russert, but the social-political scene of public power mourning was Washington at its most cynical.) It doesn’t matter whether or not you liked the guy, “you’re in the room with powerful people, anything can happen,” one cheerleader remarked. Leibovich also describes the craven, self-indulgent scene of the annual White House Correspondents Dinner along with its before and after parties where journalists act like it was high school. It is “The Club’s version of the High Holidays.

“You know you’ve made it in D.C. when someone says about you that it isn’t clear what he does.” Folks move in swivets, voluntarily or not. “A gold rush has enthralled the place…a crucible of easy wealth, fame, forgiveness, and next acts.” Running for office and losing, like most of the Republican candidates in 2012, means “increased speaking fees, greater demand for consulting services, and talk of a book and TV deal…” This Town is filled with three classes of people: 1) young hyper-ambitious operators who are critical of people in power or ahead of them on line; 2) has-beens, critical of those currently in power; and 3) current officials fearful of those circling for their jobs and those old-timers who remind them of their futures.

The dated notion that Washington is a one-industry town where government reigns no longer applies. The formers, the media, the lobbyists, and the lawyers, all unelected, now reign, and the government employees all know that. Thus, the institutions of government have morphed into a supporting role. Congressmen, agency heads, presidents come and go; the new “elite” remains to run things. The action now takes place in select dining rooms, public and private, and “green rooms and war rooms and holding rooms, spin rooms,” while official ceremonial action in
the halls of government is covered by C-SPAN.

Along with Leibovich’s amusingly subversive analysis, his book is filled with memorable lines, some Leibovich’s own, some uttered by others:

“Washington is a place where no one takes friendship too personally.” Tony Snow, Hill aide, later media commentator.

“Washington may not serve the country well but it has in fact worked splendidly for Washington itself.” Leibovich.

The Washington club of insiders “[has] congealed into a permanent political class, the defining characteristic of which [is] its readiness to abandon those not inside the process.” Joan Didion.

“The lubricants of politics are sycophancy, gossip, and cloying salesmanship.” Leibovich.

“My vote can’t be bought, but it can be rented.” John Breaux, former legislator, later lobbyist.

“Washington is a derivative culture where people become defined by their proximity to other people and institutions.” Leibovich.

“The Washington economy (whose beneficiaries are lobbyists, paid consultants, cable news) is predicated on the perpetuation of conflict, not the resolution of problems.” Leibovich.

"All national political reporters lived in Washington, saw the same people, used the same sources, belonged to the same background groups, and swore by the same omens. They arrived at their answers just as independently as a class of honest seventh-graders using the same geometry text …” Tim Crouse, The Boys in the Bus.

“Washington puts the me in media.” Leibovich.

“Political Washington is an inbred company town where party differences are easily subsumed by membership in The Club.” Walter Shapiro, Time political reporter.

This Town is clever, and very funny, until you step back and think about it. It is an easy read that leads to some complex conclusions.

Ronald Goldfarb is a Washington, DC, and Miami-based attorney, author, and literary agent whose reviews appear regularly in Washington Lawyer.

100 Amazing Facts about the Negro