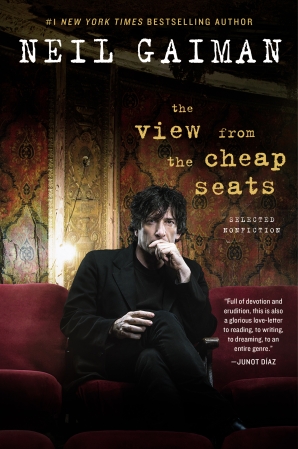 Neil Gaiman’s The View from the Cheap Seats is a wide-ranging selection of 85 of his essays. Divided into 10 sections, it is a collection that defies the need for connection. Though often there will be a theme or thread that will suggest unity, what ultimately binds these pieces is Gaiman himself. His life. The great scope of his work.

This book is a compilation; it includes an excerpt of an interview, a transcript of a talk, a how-to, some reflections, confessions, and stories. It’s a compendium of Gaiman’s views, his speeches and notes and letters, introductions and book reviews.

In one particular interview with Lou Reed, Gaiman asks, “How did you decide which song lyrics to put in the book?” In reading those words, a similar question for Gaiman comes to mind: How did you decide which essays to include in this book? Like Reed, would Gaiman say he “picked out the ones [he] thought stood alone the best”? Or would he say, as Reed did, that he was more concerned with whether an essay “contributed to a narrative form…”?

In an introduction Gaiman writes for Jim Steinmeyer’s “Art and Artiface,” he refers to the book as “a backstage tour” of theatrical magic where mysteries are “excellently unraveled.” He writes: “This book of essays is not a book for people who want to know How It Was Done, as much as it is a book for those who want to know Why Anyone Would Want to Do It in the First Place.”

One might consider Gaiman’s collection in the same way — there is no means by which readers can know how he’s done it, how he’s managed to be so unbelievably prolific. But there is no question about why: Gaiman is tirelessly inquisitive. He is intrigued by the complexities of things, but also by their simplicities. He delights in contradictions and inquiries and the journey of unending discovery that writing has afforded him.

Reading this collection is likewise a journey for the reader, a journey into the mind of a writer, a revelation of unexpected questions, and a thought-provoking quest for answers. Along the way, Gaiman offers lessons on how to listen, how to read, and how to value honest writing.

Near the end of the book, Gaiman comments on friend and fellow writer Terry Pratchett: “There is a fury to [his] writing. The anger is always there.” In some ways, the same could be said of Gaiman. Less a sense of anger, though, and more an intensity, a fierceness and determination to leave no stone unturned, no subject unexplored.

This book is a study in the power of observation. It brings to light Gaiman’s attention to language, to literature, and to everything that makes up a cultural life.