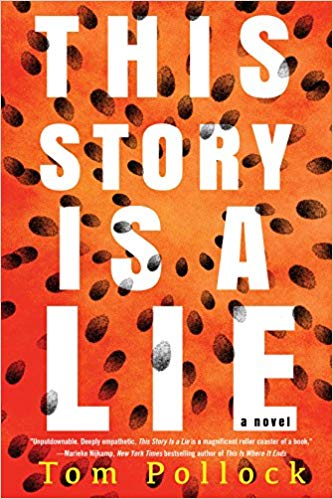 Seventeen-year-old Peter Blankman is a math prodigy who suffers from extreme anxiety and navigates his day-to-day routine with the help of his mother, a brilliant scientist, and his twin sister, Bel. His life is turned upside down when someone attempts to assassinate his mother at a ceremony celebrating her work — and Bel vanishes.

In the aftermath, Pete falls into England’s secret world of espionage and covert operations, where no one is who they seem to be, not even Pete himself.

This Story Is a Lie is easily one of the greatest page-turners I’ve read this year. The only other that comes close is A.J. Finn’s The Woman in the Window (such a runaway hit that it’s getting a film adaptation starring Amy Adams). Author Tom Pollock has woven an incredibly clever plot; the pace at which he reveals Pete’s next clue kept me on my toes and burning the midnight oil.

Pete’s wit and charm, even despite his trying circumstances, make the story all the more compelling. He’s not your typical spy-novel hero: He’s anxious and naïve instead of collected and savvy. But he embodies some of my favorite things about young-adult literature.

For example, YA often sneaks in education without being pedantic. People who read Percy Jackson walk away knowing about Greek gods, and fans of Ruta Sepetys know a lot more about WWII-era Eastern Europe than the average high-schooler.

In This Story Is a Lie, Pete’s use and love of math slyly educate readers within a highly entertaining premise. Facts about the lives of famous mathematicians as well as some mathematical theory that the target audience may very well be learning about in school help Pete uncover the mystery of what happened to his mother.

The use of math reminded me a lot of the A Girl Named Digit duology. Both stories feature teenage math prodigies with anxiety who get caught up in government plots and have to use their skills to save those they love. Though, where A Girl Named Digit feels like an action-adventure movie, This Story Is a Lie is far more gritty and geared toward the older end of the YA spectrum.

Like other YA literature favorites, This Story Is a Lie features characters of different identities, both so that people of all different backgrounds can see themselves in the narrative and that people can learn about life experiences different from their own.

Pollock has spoken about how Pete’s extreme anxiety was informed by his own struggle with mental health. His choice to be vulnerable and candid about his experience through his novel heightens Pete’s anxiety from a plot device to a realistic portrayal of mental illness.

While there were many things about this book that I loved, there were several elements that detracted from my enjoyment.

The plot is divided between present time, where Pete is trying to help his mother, and “recursion” sections that are essentially flashbacks. Early in the book, I liked them because they were cleverly placed and helped reveal crucial information for unraveling the book’s mystery. Toward the end, however, they occurred frequently and felt clunky. The reader knows enough about what is happening at that point that she doesn’t need a flashback to explain why new plot information is significant.

The other aspect of the story that fell short for me was Bel, Pete’s twin. It’s hard to explain without giving too much away, but essentially, between the two of them, they reinforce the angel/devil dynamic — that one twin must be good, and one evil. While it makes sense within the context of the story, as a twin, it’s a personal pet peeve of mine. When my sister and I were young, a woman came up to us and asked our mother which one was the angel and which one was the devil. It’s a pretty obnoxious idea.

Bel’s darkness as a character also rubbed me the wrong way. Again, it made sense within the context of the story, but I had a hard time believing Pete could overlook what she’d done as easily as he did.

Overall, this story is intensely gripping because of its clever plot and memorable characters, and I definitely recommend it. Fans of spy fiction and contemporary YA should look for This Story Is a Lie on the shelves of their local bookstore or library.

Larissa Banitt has been reviewing books since she was in middle school and created the Howling Turtle book blog. Now an English major and freelance writer, she still finds time to update her blog and find the best YA fiction has to offer, though maybe not as much as she’d like to.