A brief but affecting illustration that we truly do choose our loved ones. 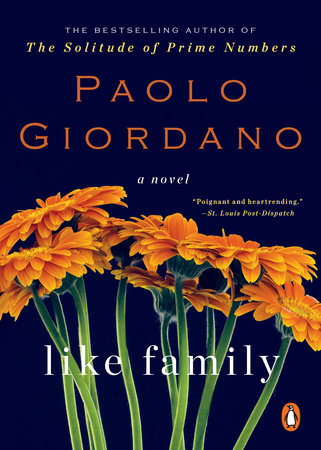 If you’re familiar with Paolo Giordano because of either of his first two novels, The Solitude of Prime Numbers or The Human Body, be aware that Like Family has little in common with them — little besides the fact that Giordano is the author, and that’s reason enough for his fans to pick this one up, too.

Unlike his previous novels, fraught as they were, this is a slender, tender volume, easily consumed in a single afternoon, possibly while you’re wrapped up in a blanket on the sofa with a mug of tea.

Giordano admits at the outset that this, generally, is a true story, with names and a few salient points changed, but the sentiment he feels for these people is real. It’s also a bit of a giveaway that the first-person narrator is a Ph.D. in particle physics, a characteristic he shares with the author.

This is the story of a young husband and wife who, it is easy to see, are a bit of a mismatch: Nora is creative, messy, and outgoing, while our unnamed narrator is mathematical, precise, introverted, and somewhat pessimistic. His current position is chronically at risk, but she’s unenthusiastic about moving from Italy to Switzerland so that he can accept a prestigious research grant. Then, when Nora’s pregnancy turns high-risk and she is confined to months of bedrest, Mrs. A. enters their lives.

At first they are a bit put-upon by the way she takes over operations, but it isn’t long before they come to depend upon her.

“By the time Emanuele was born, we were too spoiled to give up her attentions. Mrs. A. went from being Nora’s nurse to being our son’s nanny, as if there were a natural continuity between the two occupations, and although she had not cared for a newborn baby before that, she immediately proved to have very clear ideas — much clearer than ours — on what to do and what not to do.”

Mrs. A. has a primary hand in raising Emanuele. She is often mistaken for his grandmother, and the two dote upon each other. He imitates his parents in calling Mrs. A. “Babette,” after the title character from the Karen Blixen story “Babette’s Feast,” because of how central food is to her place in the family. When, after eight years, Mrs. A. suddenly announces her plan to stop coming each day simply because she is tired, the household goes into a tailspin.

The story begins at the end, with Mrs. A’s death, but from there goes forward and back to reveal the physical and emotional details that allow us to see deeply into these lives. In Like Family, Giordano gives in to a tendency to tell rather than to show, but the telling is often so lovely that it’s hard to complain. For example: “In the long run, every love needs someone to witness and acknowledge it, to validate it, or it may turn out to be just a mirage. Without her gaze we felt at risk.”

And, as he gazes on his sleeping wife: “In the end we are almost never happy or unhappy because of what happens to us; we are one or the other depending on the humor that flows inside us, and hers is molten silver: the whitest of metals, the best conductor, and the most merciless reflector. The consolation of knowing that she is so strong mixes with the fear of not being truly indispensable to her, with the suspicion that I might be sucking the life out of her, like a kind of gigantic parasite.”

It seems unfair, to those of us with a smaller talent set, that a guy with a Ph.D. in something as arcane as particle physics could write as beautifully, as tenderly as Giordano often does. On the other hand, we can just be grateful and keep reading.

Jennifer Bort Yacovissi’s debut novel, Up the Hill to Home, tells the story of four generations of a family in Washington, DC, between the Civil War and the Great Depression. Jenny is a member of PEN and the National Book Critics’ Circle, and reviews regularly for both the Independent and the Historical Novels Review of the Historical Novel Society. She is also president of the Annapolis chapter of the Maryland Writers’ Association.