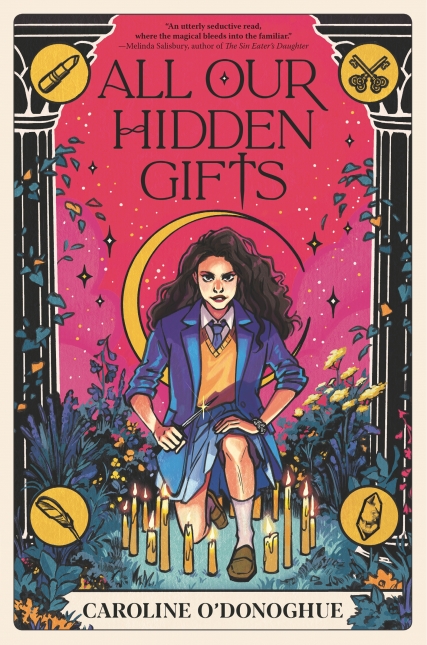 Unlike her successful and much older siblings, Maeve Chambers has never been known as an exemplary student. While she and her former best friend, Lily O’Callaghan, both made it out of the slow reading class where they met, school is still a struggle for Maeve. A lot of things are a struggle for her when “sometimes frustration and rage surge through [Maeve], sparking out in ways [she] can’t predict or control.”

Adrift at her Catholic school, St. Bernadette’s, where she strives to keep up with classwork and make new friends after her estrangement from Lily, Maeve is familiar with detention. “The story of how [Maeve] ended up with the Chokey Card Tarot Consultancy can be told in four detentions, three notes sent home, two bad report cards, and one Tuesday afternoon that ended with [her] locked in a cupboard.”

After locating a mysterious deck of tarot cards while cleaning out said cupboard, Maeve discovers an unexpected knack for interpreting the cards for herself and classmates, earning a certain notoriety (and some pocket money) as her reputation grows. Every card is easy to learn and understand except for one: the Housekeeper — a card that has no known meaning in any tarot guide Maeve can find.

The mysterious extra card sparks disastrous results when Maeve is goaded into offering a reading to Lily in front of their entire class. The Housekeeper’s appearance leads to harsh words between the former friends and, possibly, to Lily’s abrupt disappearance.

Without a clear explanation for what happened to Lily, Maeve knows she's an obvious person of interest in the case. As she tries to understand whether Lily’s vanishing is connected to the sudden increased popularity of a local fundamentalist group called the Children of Brigid, Maeve realizes that she, and the Housekeeper card, may have played a bigger role in Lily’s departure than she knows.

With help from Lily's older brother, Roe, and new friend Fiona, Maeve will have to uncover the truth behind the Housekeeper and her own affinity for magic if she wants to bring Lily home. Maeve describes Fiona as having an Irish first name, an English last name (Buttersfield), brown skin from her Filipina mother, and limited “patience for other people’s bullshit” as those people try to fit her into various boxes. Most of the rest of the cast is presumed white.

All Our Hidden Gifts is Caroline O’Donoghue’s YA debut and the projected start of a series. Stefanie Caponi’s black-and-white illustrations of various tarot cards — including the infamous Housekeeper — are included throughout. Readers will learn tarot basics along with Maeve as she begins to interpret cards; those already familiar with tarot will recognize key symbology and common card meanings. And anyone especially well-versed in tarot might also appreciate the cover artwork by Lisa M. Sterle, the artist behind the Modern Witch Tarot deck and guide journal.

O'Donoghue folds many different elements into this often-sprawling narrative that tries to unravel the dual mysteries of Lily's disappearance and the Housekeeper card while also tackling increased intolerance throughout the Irish city of Kilbeg as escalated by the Children of Brigid and their eerily savvy American leader, Aaron. Mysticism and folklore add another layer to this already-packed story. As one character asserts, "Every culture you can think of has some version of the White Lady," whether or not she is called the Housekeeper.

Against this larger backdrop, Maeve tries to understand her — and the Housekeeper’s — role in Kilbeg’s unrest while navigating her new friendship with Fiona. Maeve’s fledgling romance with Roe — who sees his pronouns and gender identity as negotiable as he works on expressing his truest self with his chosen name and genderqueer fashion — adds some sweetness to an otherwise grim tale.

Flashbacks to the events leading up to Maeve and Lily's falling-out contrast with the tense present as the story builds to a dramatic conclusion that readers can only hope will be followed by a second book.