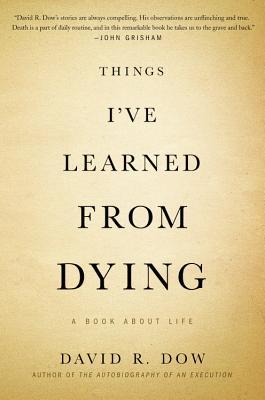 At the heart of this book lies the death from terminal melanoma of the author’s father-in-law, Peter. Throughout Peter’s sickness, David R. Dow kept a journal, which appears in the book as italicized pages written in first person, as though Peter were speaking.

Along with his chronicle of Peter’s illness, Dow tells the story of his death row defense of a convicted murderer, Eddie Waterman. He loses his appeal, and Waterman dies by lethal injection.

Dow writes about yet a third death during the book’s time period. His family’s Doberman, Winona, dies of liver failure.

Dow has written a page-turner about his work as a death penalty lawyer in Texas. He tells about legal strategy, about Texas politics and Texas law, about how he learns the horrifically awful family histories of his clients. He knows that Eddie Waterman has become a decent person in prison, no longer the dangerous man who put a bullet through the mouth of an already dead woman and then said, “That’s how you smoke a bitch.”

David Dow also knows that death row inmates like Waterman do not change their attitudes because they’re scared to die. “They have all day every day to do nothing except think about the myriad ways they’ve screwed up their lives. There’s not a single thing to distract them from what they have done, and what they have done is lose their own families and destroy another. They become remorseful because they don’t have enough space to evade the enormity of their deeds.”

Though he fails to save Waterman, Dow knows that he will keep on trying to save death row inmates. He has the skill necessary to do this difficult work  — and to write about it masterfully.

He wants to write masterfully about his father-in-law’s death, hence the italicized pages with Peter “talking,” which get the reader’s attention because they sound first-hand. “It’s the treatment that will kill me.” “Of the two doctors on my team, one is Pollyanna and one is Chicken Little.” Chemotherapy “is neither art nor science, just crude, continued recalibration.” Peter’s words, however, are not first-hand, but rather Dow’s later re-creation. In an author’s note, Dow reminds the reader that his book is memoir not history, and that he wishes desperately that Peter were alive to “approve the words I put into his mouth.”

Cancer brings with it desperation, not masterfulness. Dow, to his great credit, shows both the desperation and the tenderness that pervaded his family’s life through the months of Peter’s illness. Katya, wife of David and daughter of Peter, urges chemotherapy and surgery on her father because she wants to have every last minute possible with him. Peter, hating the ravages of chemotherapy, asks David to teach Katya how to let go. David instead says to his father-in-law, “You have responsibilities to other people. Some you choose, some you don’t.”

Meanwhile, David’s eight-year-old son Lincoln loses the dog he has known his entire life. Nonie, he calls her, because as a baby he couldn’t pronounce Winona, and he feeds her grape-size pieces of his grilled cheese sandwiches. Six months after she died: “At night, every night, Lincoln would say, I miss Nonie, and I would sit on the floor outside his room, slumped against the wall, powerless to accomplish anything worthwhile, while my son cried himself to sleep.”

The reader finds the things Dow learned scattered throughout the book. For example, describing Katya’s internet search for cancer treatments for her father, he writes: “One thing I’ve learned is that there are times you have to let the people you love hold on to hope the math rules out.” Even as Dow learns he also teaches, through his struggle to write about dying. In his book you will find none of the often-heard facile phrases uttered after a death — words about “moving on” or “starting the healing process.” His most profound statement begins the book’s last chapter: “Time does not heal all wounds. Some pain becomes part of who you are.”

Things I’ve Learned From Dying: A Book About Life offers the reader great pleasures, notably its author’s fine writing and his realism about what the Apostle Paul called “the last enemy.” One more pleasure comes in the book’s last three pages, which describe the arrival at the Dows’ home of a 10-week-old Doberman puppy named Franklin. The dog races around “like some demented dervish,” Lincoln laughing and chasing him. Lincoln says to his father, “Can we please get Franklin? Please?” No reader in the world could doubt Dow’s answer.