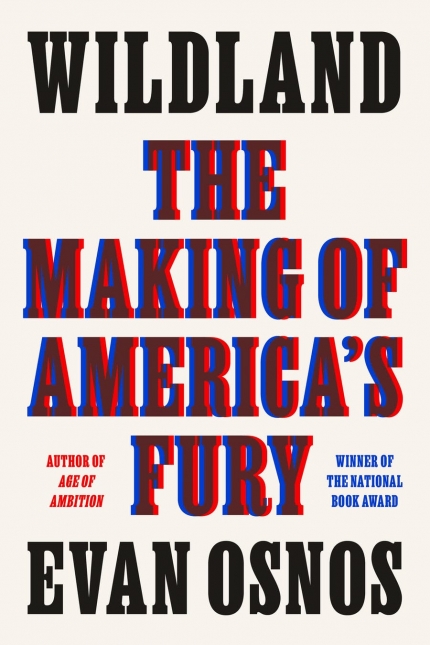 In 2021, the major issues dividing Americans revealed themselves not as disagreements but as provocations to violence. From masks and vaccines to contain covid-19 to the results of the 2020 presidential election, it seems easy to set Americans off and against each other. Add provocative misinformation on the internet and cable news to the mix, and it seems our culture is dry forestland, vulnerable to conflagration from something as awesome as a lightning bolt or banal as a discarded cigarette.

In California, beset by intense forest fires that have grown more frequent and difficult to control as climate change brings drier and windier summers and autumns, a “wildland” is a region just waiting to burn. For Evan Osnos, for years the New Yorker’s correspondent in China and an active chronicler of U.S. politics, a wildland is what our country has become. To find out how and why, he examines three communities where he’s lived: Greenwich, CT, Chicago, IL, and Clarksburg, WV.

The issues he identifies and usefully packages together into an explanatory whole in Wildland are not surprising. The consequences of an economy driven by its financial sector rather than served by it are felt in Greenwich’s hedge-fund paradise and in Appalachia. The disruption of local businesses by scalable national and international companies both binds and tears our national character.

In Greenwich, the culture embraced a winner-take-all mentality, supporting tax cuts for the wealthy while its best-paid residents engaged in insider trading and rigged their children’s admissions to private prep schools and colleges. In West Virginia, private equity took over an already dying coal industry as institutions that supported the community, such as the local newspaper, have been disrupted by the internet. In Chicago, a diverse community became a locus for protesting police brutality and cynical voter-suppression campaigns.

At the national level, we’ve seen government by force and cynicism. The George W. Bush Administration expressed contempt for facts in its response to the 9/11 attacks and its pursuit of a doomed foreign policy meant to remake the Middle East. Mitch McConnell, leading Republicans in the Senate, has blatantly pursued partisan victory over effective governance, nearly causing the United States to default in 2011, denying Barack Obama a Supreme Court justice in 2016, and twice thwarting serious impeachment charges brought by Democrats against Donald Trump.

Ultimately, though, Osnos reveals that the U.S. is not just a population misled by manipulative internet memes or podcast idealogues. He is at his best when he captures the frustrations of Americans who have good ideas but no standing to implement them or even to make them heard. At its best, Wildland is as revealing of the American psyche as Arthur Miller’s 1949 play, Death of a Salesman, when Linda Loman laments that “attention must be paid” to the life of her late and imperfect husband.

In 2013, coal miner and labor organizer Larry Knissel studied up on a plan by a hedge fund to buy his employer, take it into bankruptcy, and spin off its restructured assets, shedding health and pension obligations to retirees along the way. Among other things, he researched debt tranches, equity issuance, and bankruptcy law. Finally, he and a group of workers attended a shareholder meeting and, from his seat in the back of the room, Knissel confronted his new corporate owners:

“The guys in this back row are the people responsible for you making all these millions that you brag about. The guys right here are the backbone of your coal company. You should be ashamed by the way you treated these people. That twenty-six million dollars you saved was the money you took from the pensions.”

Knissel braced for rebuttal, but nothing happened. He later recalled to Osnos: “Not one of those ball-less peckerheads turned around and challenged me in any way.”

Here, Osnos pinpoints the source of America’s legitimate anger. Attention is not always paid. Silence, from those with the privilege not to listen, is cruel dismissal. Knissel’s experience of being ignored, not even worth arguing with, may seem familiar to people on the left and the right who have gathered to protest for their causes, especially since 2016. Those causes may differ dramatically and fundamentally, but a common theme is that political leaders, employers, and the mainstream media are not listening.

And nothing, perhaps, is more maddening than that sense of being ignored. It is the Santa Ana wind that brings fire to the wildland.

Indelible Ink: The Trials of John Peter Zenger and the Birth of America’s Free Press

A masterful courtroom drama about the foundational case for unfettered journalism in the U.S.