The Wrong End of the Telescope: A Novel 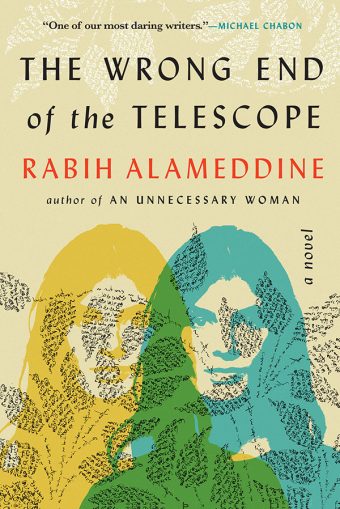 Rabih Alameddine’s The Wrong End of the Telescope may best be described as three books in one. It’s a chronicle of the Syrian refugee crisis on the Greek island of Lesbos in early 2016; it’s the personal story of Mina Simpson, an American surgeon of Lebanese-Syrian origin who arrives on the island to help with the humanitarian crisis and reconnect with her brother; and finally, it’s a work of metafiction — bordering on autofiction — in which Alameddine scrutinizes his own limitations as a writer and his inability to tell this story except in the most elliptical way.

Narrated by Mina, the novel opens with her arrival on Lesbos for a week to help her friend Emma, who works with a Swedish NGO. For Mina, a lesbian trans woman in her late 50s, the trip conjures memories of her childhood in Beirut, since Lesbos is “the closest I’d been to Lebanon in decades.”

She left Beirut more than 30 years ago to attend Harvard and never returned, changing her name, transitioning, and cutting off all ties with her family — with the exception of one brother, Mazen, “the only family member who crossed my picket line after years of silence,” who is meeting her in Lesbos.

Media accounts had painted a dire situation in Lesbos, yet when Mina arrives, there is at first no work for her to do. Stormy seas are keeping boats from crossing, and the holiday season has brought an abundance of volunteers from all over the world. Mina wonders if it was worth missing her 30th wedding anniversary with her wife, Francine, in order to sit idly by, waiting for an influx of refugees.

Many of the volunteers are college students on break. “If a single one of these youngsters takes a selfie with the boat,” Emma says to Mina, “I’m going to gouge their eyes out.” When Mina is incredulous, Emma explains that all they want is “the perfect photo for Facebook or Instagram or whatever’s the latest stupid thing. Look at me, I’m not useless. I’m a humanitarian. Aren’t I wonderful?” Underlying the novel is a subtle criticism of some humanitarian efforts being little more than virtue signaling.

When a boat finally comes, among the arrivals is a family of five — Sumaiya, her husband, and their three young daughters — and Mina is immediately swept up into their troubles. In treating Sumaiya, who is suffering from late-stage liver cancer, Mina becomes close to the family. At one point, 10-year-old Asma asks Mina, “Are you a man?”

Her family is shocked at the boldness of her question, but Mina is unfazed. “I’m not a man,” she replies. “I was born male, but that wasn’t who I was.”

When no one in the family is startled by this revelation, Sumaiya offers a longer explanation: In their Syrian village, just one doctor was available to make house calls. Since a male doctor was not permitted to treat female patients, the local physician, Dr. Fawaz, would first come as himself to treat male patients, and then he would leave and reappear in female garb as Sitt Fawzieh to treat the women.

While the story of Sumaiya and her family is the most vivid refugee narrative in the book, Alameddine offers scores of others, including the experiences of LGBTQ+ refugees like Hiyam, a trans woman whose boyfriend was beheaded, and the story of two Iraqi gay men whom the authorities would not process until they acted more “femme” and convincingly gay.

Indeed, expressing LGBTQ+ experiences among refugee and non-refugee characters is one of the author’s central projects in this novel. Mina’s friend Emma is also a trans woman; when she is not helping refugees, she is dating young volunteers. “Many of these men had never been with a trans woman…and she intended to correct that imbalance, a public service.”

One of the voices that appears in Alameddine’s book is his own, though it’s muted and refracted through Mina’s narration. Mina, writing from the first-person “I,” addresses the author through the second-person “you.” Early on, she says to him, “You insisted I write the refugee story, as well as your story and mine. This thing.” She explains why Alameddine was not able to tell the story himself:

“You tried writing the refugee story. Many times, many different ways. You failed. And failed again. Maybe failed better. Still you couldn’t. More than two years after you and I met in Lesbos, you were still trying. You tackled it from one direction, then another, to no avail. You were too involved, unable to disentangle yourself from the tale. You said that you couldn’t calibrate the correct distance.”

The title of the book may best be understood as that “correct distance”; it’s as though, through Mina’s perspective, Alameddine is peering back at himself. He remains a ghostly presence through much of the novel, first as an impetus for Mina to tell her story, and later, as a physical presence on Lesbos. Though Mina hears he is on the island and later glimpses him in the Moria refugee camp, she doesn’t interact with him until late in the story, when they happen to meet at a restaurant, and Mina insists that the author share a meal with her and her companions, including her brother.

Over dinner, the author tries to explain to Mina his despair: “You said you wanted people not to dismiss the suffering, not to read about the loss and sorrow, feel bad for a minute or two, then go back to their glass of overly sweet chardonnay. But you failed, of course. And then the first crack in your veneer. You said, in a whisper, that the only wall you broke was yours.” Later, this statement is amended: “Lesbos not only broke your wall, it broke you.”

The author, being merely a recipient of stories, a container for the pain of others, becomes paralyzed by inaction, which is why Mina, as intermediary, becomes necessary: She is a character with agency, with a specialty — medicine — that allows her to make a real contribution. Also, being a trans woman estranged from her family, Mina earns her right to speak by virtue of her suffering. Though the author is a gay man, he is self-deprecating, someone whose own privileged life makes him unworthy of telling these stories. Mina relates:

“You once wrote that you felt embarrassed when critics and reviewers classified your work as immigrant literature. You joked that the worst immigration trauma you had endured was when your flight from Heathrow was delayed.”

But Mina points out that Alameddine, who came to Los Angeles from Beirut in 1977, has indeed experienced trauma. During his time at UCLA — which coincided with the Iran hostage crisis — he was maligned despite being neither Iranian nor Muslim, and his sexuality has also left him vulnerable to attack:

“Someone smashed your car window with a baseball bat in the parking lot of a gay bar on Santa Monica Boulevard, while you were inside the car no less. Would you consider that an immigrant trauma or your run-of-the-mill gay bashing?”

Questioning his right to tell refugee stories — even though he has been telling them for years — the author suspects his contribution amounts to little. On the one hand, he can’t stomach the volunteers he encounters: “You loathed their selfies, their self-flattery, their patronizing righteousness, their callous self-regard, everything. And then you felt guilty for hating. You said you knew that in some way they were the best humanity had to offer.” On the other, “You weren’t any better, you said. You couldn’t even do disaster tourism well. You came to a crisis area but ended up locking yourself in a hotel room, hiding from the people you had wanted to help.”

It is in Mina — in her painful family history, her reunion with her brother, her deep connection to her wife, her transition, and her ability to actively help one refugee family — that Alameddine creates the kind of volunteer worthy of admiration. Mina, by the author’s estimation, has earned the right to tell this story where he has not.

It is these latter stories — Mina’s and the author’s — that overshadow the many refugee voices, often reducing their suffering to brief vignettes. With the exception of Sumaiya’s quest to get her family to safety while battling a fatal illness, the refugees’ stories fade into the background.

If Alameddine is to be faulted for anything, it for his overreach, his ambition to create a single novel that encompasses the refugee crisis, a range of LGBTQ+ experiences, and metafiction. His book is driven not by plot — which tends to become diffuse — but by a storm of passion and rage and powerlessness in the face of suffering. Those who patiently work through his many meticulously constructed layers will be rewarded with a contemplative reading experience.

The Evening Spider: A Novel