The World Turned Upside Down: A History of the Chinese Cultural Revolution

A thoroughly researched account of the period often shorthanded as “China gone mad.” 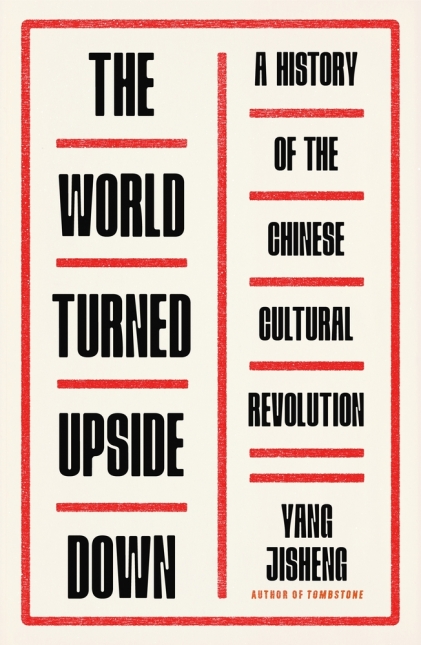 A handful of books have fundamentally changed the way I think, and teach, about the history of China. Kenneth Pomeranz’s The Great Divergence and Gail Hershatter’s The Gender of Memory are two. But neither of those had the visceral impact of Yang Jisheng’s Tombstone, which showed the true horror of the Great Leap Forward and its associated famine.

In The World Turned Upside Down: A History of the Chinese Cultural Revolution, Yang turns his attention to the years 1966-1976 — in some ways, a sequel to the Great Leap. Ably translated by Stacy Mosher and Guo Jian, this book doesn’t manage the gut-wrenching impact of Tombstone, but that is a high bar. Rather, The World Turned Upside Down reveals the unexpected — but usually rational — twists of Mao’s war against his own party and compellingly demonstrates that the Great Proletarian Cultural Revolution (GPCR) set the stage for Deng Xiaoping’s China that emerged afterward.

The Cultural Revolution is an enormous topic, and Yang doesn’t shy away from it. Beyond the decade that formally constituted the GPCR, Yang provides a chapter on the leadup to 1966, and another on the Reform and Opening era that followed it. Twenty-nine chapters, 622 pages of text, and 72 pages of notes affirm that this is an encyclopedic account.

As is often the case, this book’s greatest weakness is also its strength. I randomly flipped to five pages and found an average of more than eight proper names per page. This is a clumsy measure but suggests the level of detail that an author conveys. Such detail can be daunting even for specialists, but it is not superfluous.

Without question, there is much about the GPCR that defies belief, both profound (middle-schoolers beating teachers to death, education shut down for years, heads of state forced from office) and absurd (demands that traffic lights be reversed so that red would mean go, flight attendants leading passengers in a loyalty dance before takeoff). Yet the narrative that China “went crazy” would remove it from analysis: If something is nonsensical, it cannot be understood.

In Yang’s presentation, the Cultural Revolution is always understandable. While events were often out of control, and consequences frequently unanticipated, there were always rational decisions to be analyzed. Yang’s major contribution is his reevaluation of the Communist Party of China (CPC) and its culpability in the GPCR.

There is no doubt that Mao Zedong was primarily responsible for the Cultural Revolution, but the Party he struggled against was complicit. This was not an attempt by Mao to bring chaos out of order, in Yang’s view, but a power struggle, much more mundane than the “China gone mad” narrative suggests. It was a fight between “opposing interests, and ordinary people bore the brunt of it.”

Yang argues, succinctly, “The root cause of the Cultural Revolution is found in the system of the seventeen years preceding it and not in Mao’s individual character alone.” By diminishing Mao’s role — he was the most important but far from the only factor — Yang makes clear his critique of CPC rule in China.

In the official Party view, Mao’s excesses caused the GPCR and the even more devastating Great Leap Forward that Yang documented in Tombstone. It was a man run amok that led to these tragedies, not the Party or its system. Yang argues, persuasively, that the Party used Mao as a scapegoat; the Party itself — and what Yang calls the “bureaucratic clique” within it — was as responsible for the dysfunction and violence as Mao.

Make no mistake: Mao comes in for the bulk of the blame here. Using “surges of ardor that dwarfed a papal appearance at the Vatican,” he created “a fanatical mass movement that meted out unprecedented brutality.” The book documents event after event, many violent and often deadly, that took place at Mao’s order or because the perpetrators believed Mao would approve.

Without Mao, there would not have been a Cultural Revolution, but Yang suspects that the concentration of power at the expense of the common people would have gone on regardless because it was the system that was fundamentally at fault, not just one man.

Yang Jisheng’s career gave him perspective and access. Working as a journalist during the Cultural Revolution, he reported on many of the events that he writes about in The World Turned Upside Down, although this book is not a work of reportage but of history. Even in more open times, materials related to the Cultural Revolution have rarely been available, but the book’s research base is impressive: It includes hundreds of books, document collections, interviews, letters, newspapers, and articles (exactly how many is not clear because the book, though extensively documented with endnotes, lacks a bibliography).

The book ends with a clear eye on present-day leadership eager to fault the Party for evading responsibility. Having survived Mao’s challenge in the GPCR, the bureaucratic clique strengthened itself in the Reform and Opening era. An unprecedented bureaucratization, in turn, created what Yang calls a “power market economy”: “a market economy dominated by a government unconstrained by the constitution.”

In the decades since Reform and Opening began, China’s economy has grown dramatically, but so too has inequality, corruption, and plutocracy. Yang ends, though, by pulling his punches. Change is needed, he writes, but “sudden change is dangerous, and peaceful evolution is more appropriate.”

Yang Jisheng has written an essential work for those wanting to understand China’s modern history. Not as provocative as Tombstone, The World Turns Upside Down nonetheless provides a compelling argument, damning evidence, and authoritative sources to tell the definitive history of the Cultural Revolution.

James Carter is the author of Champions Day: The End of Old Shanghai.