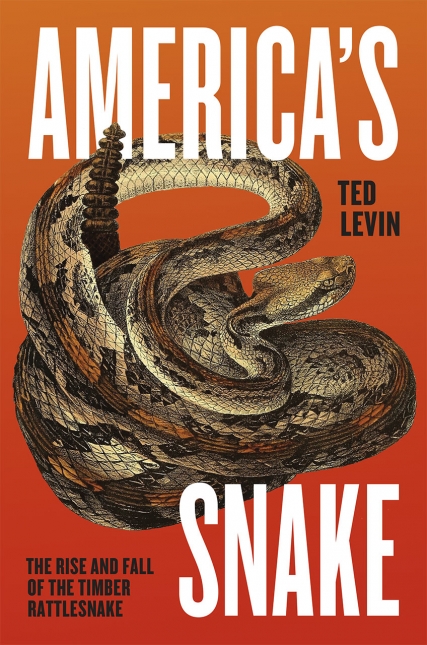 It hurts to get bitten by a rattlesnake, it hurts a lot, and some who have had the experience have described it in colorfully gruesome terms. It’s like slamming your finger in a car door, hinged side, several times, according to one unfortunate fellow — or getting stabbed by two red-hot ice picks.

But such reactions, cited in Ted Levin's fine natural history, America's Snake: The Rise and Fall of the Timber Rattlesnake, come mostly from the careless or unlucky. Indeed, a central point of the book is that timber rattlers are not aggressive and pose little risk to humans. In the United States, on average, five people die of snakebites in a year (less than one fatality for every 1,800 bites). It's more likely, Levin says, that you will die from the sting of a bee or a wasp.

Yet we have a fear and loathing of rattlesnakes, and snakes in general, all out of proportion to their threat. Perhaps this is hard-wired in us; ophidiophobia may be in our DNA. Levin quotes a California professor, Lynne Isbell, who posits that the principal predators of the first primates, on the supercontinent Gondwana, were fire-hose-thick constricting snakes. So fearsome were they to the “primordial lemurs” that, 160 million years later, the hair on the back of the neck of one-third of the latest primates (us) still rises when we see a snake.

It is fair to say that Levin is not part of that one-third — he cannot recall, he says, ever being afraid of snakes. Quite the contrary: He has an affection for them and, indeed, an apparent love for Mother Nature and all her creatures, nurtured, he says, from his boyhood on Long Island. (He lives in Massachusetts now, and the book is concerned mostly with snakes in the northeastern part of the United States.) Levin deserves to be better known; he authored the excellent Liquid Land: A Journey through the Florida Everglades, and several other books about the natural world.

Rattlesnakes live in a world “far beyond the threshold of both our senses and our sense of time,” Levin writes. They are slow, except when they strike. A human with vision equivalent to a rattlesnake’s would be declared legally blind. But their infrared temperature sensors are astonishingly accurate. Levin’s felicitous illustration is this: “Within the purview of a timber rattlesnake a stationary chipmunk is veiled in a swirl of radiating heat. If it moves, however, it’s dead.”

Levin got a lot of help from other herpetologists in his rattlesnake investigations, and, as one would imagine, they are a colorful group. The star is Bill Brown, a Skidmore professor who, Levin says, should be considered as to rattlesnakes as Jane Goodall is to chimps or Dian Fossey to gorillas. Brown is a sort of Robin Hood leading a group of merry men who accompany Levin to good effect and populate much of the book.

Parts of the Levin’s text have been published previously as magazine pieces, and there is a good deal of repetition in this long book. The reader is told three times, for example, that human hair and fingernails are made of keratin. (So are the snake's epidermis and its rattle — the latter of which Levin calls "arguably the most novel appendage in the animal kingdom.")

In an evident effort to construct a seamless whole, the last half of the book is full of phrases such as "it bears repeating” (gravid females, who give birth only every three years, are quite vulnerable) and "to refresh your memory" (rattlesnakes have extraordinary camouflage; experts can come within a footstep and not see them).

This echo effect is a minor flaw (if indeed it is a flaw at all), but once or twice Levin clangs a falser note, as in his discussion of snake handlers — Pentecostal Christians who follow the biblical admonition to "take up snakes." (Some of these are in West Virginia, the only state, the reader is told twice, where such practice is legal.) It is the easiest thing in the world for a writer to make fun of these people. The second easiest, though no more fair, is to patronize them, as Levin does, by speculating that the "adrenaline rush triggered by dancing with rattlesnakes" is a way of escaping what he supposes must be the monotony of working as a miner, "under the thumb of coal mining goons."

But the hardest parts of the book to read — and intentionally, properly so — are those where Levin describes the mayhem that our species (the latest, smartest primates, remember) visits on these particular reptiles. The violence is reflexive and unthinking (or undertaken as a sort of hobby), and so bizarre, sometimes, as to be almost funny — such as the fellow who made a three-piece suit out of 700 rattlesnake skins. Or the park ranger who stopped his car to shoot and kill a male rattlesnake, “and then escorted me to the campground,” Levin says, “where he introduced my talk on local wildlife.”

The book is enhanced by a number of exquisite pen-and-ink (or pencil?) drawings. Better than photographs, they are, like crotalus horridus itself, quite lovely.