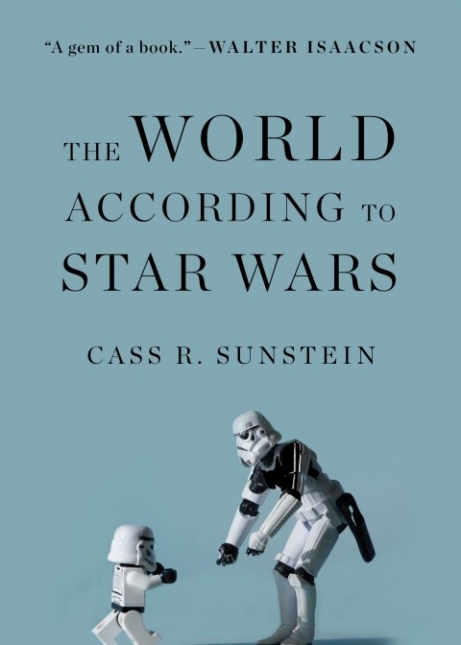 In this compact and engaging book, Harvard law professor Cass R. Sunstein offers a unique take on the seven live-action “Star Wars” movies that have culminated (so far) in last year’s blockbuster, “The Force Awakens.”

Sunstein, an esteemed constitutional scholar and social commentator, devotes most of The World According to Star Wars to reflections on the series’ social-science ramifications, a dimension on which his previous 30+ books and monographs give ample testimony to his expertise. At the same time, he leads us on a cook’s tour of narrative patterns and themes centered on the first film in the series, 1977’s “Star Wars: Episode IV – A New Hope.”

If this title befuddles you, it may be because the original installment — the one many of us think of as just plain “Star Wars” — has been rechristened for branding purposes to link up with the parade of new episodes, each a blockbuster in its own right, that have hit the big screen every few years. We’re talking about a nearly 40-year string of enormously popular films here, and one that can claim the second- or third-highest box-office gross (depending on the ranking methodology) of any movie series in history.

And this haul of big bucks doesn’t even take video, DVD, and merchandising revenue into account. But what really clinches the case for “Star Wars” as artistic phenomenon is the cultural corollary to these market factors: the saga’s undiminished appeal to wave upon wave of new audiences that have come of age as the series unfolds. Not bad for the emotional staying power of a flick that was considered a lackluster potboiler (even by the creators) before its spectacular debut.

Sunstein, old enough to have experienced the first film as a young adult, confesses to being a lifelong fan. And the virtuosity with which he comes at the “Star Wars” films through the lens of his own intellectual enthusiasm gives his book a distinctive flavor. Sunstein’s erudition drives his choice of topics for discussion, and this reader has come away deeply impressed by the span and depth of his perspective.

He ranges encyclopedically through the tangled undergrowth of what he sees as “Star Wars”-related topics: from Buddhism to Christianity; from Freudian psychoanalysis to behaviorism; from Jefferson’s take on self-government to Jihadism; from conspiracy theories to the butterfly hypothesis; from William Blake to Harry Houdini. Especially compelling is his astute and brand-savvy description of reputational cascades and network effects in the first film’s big-splash debut. In a word, Sunstein displays a Jedi-like mastery of the topics he elects to draw into the orbit of the “Star Wars” cycle.

Still, the author fastens repeatedly on moments in the “Star Wars” narrative as jumping-off points for far-ranging topical ruminations. Although richly satisfying in many respects, The World According to Star Wars falls a bit short of “paying off” its title.

Sunstein’s book is less a depiction of the worldview that “Star Wars” delineates than a snapshot of the author’s intellectual range based on thoughts inspired by the films. In itself, there’s nothing wrong with this: Cass Sunstein is a brilliantly rational expert and a joy to read on several measures.

Yet the book’s title — marketing trope or not — seems to promise a reader experience far more expansive that what we get here. At the least, the book needs a subtitle that describes the actual product compellingly, without the sales-copy spin. Sunstein’s book is only the sum of its parts, no more.

This objection aside, there are many moments in The World According to Star Wars where Sunstein shines. For instance, he astutely points out how the dreary domestic social conditions of the 1970s — e.g., Vietnam, Nixon, hyperinflation — contributed to a pent-up need for a film of unmitigated optimism that glorified individual and collective heroism. And his summation of the runaway public and critical response to the first picture’s release is magisterial, especially as he holds it up against the generally downbeat view of the film from its own cast and crew.

To wit, said Harrison Ford: “There’s this guy walking around in a giant dog suit. It was ridiculous.” Mark Hamill: “It’s hard to keep a straight face doing this stuff.” And on release day, George Lucas, intent on dodging the reviews of what he figured to be an embarrassing flop, soared off on a Hawaiian vacation.

Who knew the movie would be a hit? Beyond the viewing public, that is. And, for the record, Lucas’ friend Steven Spielberg.

Cass Sunstein’s book goes a long way toward supplying the scholarly ammunition that explains this phenomenal wave of enthusiasm, 40 years in the making. And we can be sure that the wave will continue to roll on with the release of “Rogue One – A Star Wars Story” later this year.