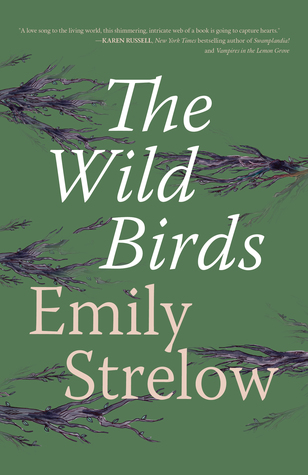 The Wild Birds opens with Alice, who is barely into full womanhood, and her teenage daughter, Lily, weeding in a filbert grove in the Eden that is Oregon’s Willamette Valley: a fecund trough of land stretching south of Portland ‘twixt ocean and mountains.

For a moment, these two women are unified by the peace found in laboring on beloved land, and in the wonder of watching a bird of prey, a northern harrier, hunt. When they realize the raptor is blind, their awe is the reader’s, and the bird becomes a metaphor for this raw and lovely novel. Navigating blind over life’s unforgiving terrain, Emily Strelow’s characters define the borderlines of home and love.

The novel weaves three separate strands of time and place: the Farallon Islands, off the coast of Northern California, in the late 1800s; the Willamette Valley in a two-decade span from the end of the hippies to the beginning of grunge; and the Mojave Desert in the early 1940s. Uniting these landscapes and eras is a silver box sheltering a collection of birds’ eggs — a talisman that carries with it the strength of a mother’s love and the fragility of hope.

A child, orphaned after the death of her mother, is sent to live with an aunt in San Francisco. When that aunt proves to be a ghost, the little girl shears her hair and transforms from Olive to Oliver, taking employment as a lighthouse keeper’s assistant on a scrabbly mound of rock populated by rabbits and unkempt men.

Her secret identity is ferreted out by Warren, a kindly trapper who takes her away from the Farallons. The two become life companions and homesteaders in the northern California city of Yreka, which, in 1941, becomes the declared capital of the state of Jefferson, a separatist movement of rural counties in southern Oregon and northern California.

The secessionist movement serves as an example of the independence peppered with madness and a fierce sense of place that all Strelow’s characters share. Later, elsewhere:

“Kids bussed in from teensy towns like Burning Woods or Logsden that dotted the patchwork Siuslaw Forest and Willamette Valley to come to high school in Philomath. Some of the ‘towns’ were no more than an intersection with a fruit stand or a market selling beer, fishing supplies, and candy. Every day after school, said rabbits scattered back to their corners of the musty wet woods. They fell back to their logging, milling, or farming families. They retreated to their back to the landers or skittered back to the commune. The green squares of the checkerboard forest somehow managed to pad the enormous gaps between people and their politics. The freaks nestled in nicely next to the rednecks, the trees acting as silent wardens of the peace.”

This is Alice and Lily’s world, yet they are neither freaks nor rednecks, just two young women struggling to care for one another in a home that offers isolation but little peace. Lily watches over her binge-drinking mother with exasperated concern, and Alice watches right back with love tainted by guilt and a secret that could shatter the fragile mother-daughter bond.

Strelow writes the natural world with the confidence and passion of a biologist-poet and allows her characters to move within these lovely and dangerous spaces finding, if not answers, at least a reason to continue on:

“The trail continued to narrow until Lily lost a shoe, was grabbed by some vine maple, and tossed down under a dense patch of Oregon Grape. She groped around for her worn sneaker, the prickly leaves scratching at her skin, and found it…The anger she had felt back at the orchard had evaporated off into the cool darkness of the forest understory. She sat down on a fern-lined log, pulled out her maps, and started to trace the river up from her house in order to figure out where she was. Wherever she was, she could feel the buffer of soft green between her anger and her future.”

Victor, a young man seeking a home and an identity separate from his wealthy parents, makes a brief appearance in latter chapters of the novel; unfortunately, it’s a storyline without much purchase, serving more as a conduit for the silver box of eggs from one era to the next than offering insights into the characters who burrow so firmly into the heart.

It’s rather Alice, Lily, and Alice’s childhood friend Sal who hold readers in thrall. Sal leaves Alice after high-school graduation, trading the Willamette’s cool, green shelter for the barren intensity of the Arizona desert. Adult heartbreaks and reckonings further separate the two and they drift apart, but the bond of place and the inevitability of fate keep the connection alive

Julie Christine Johnson is the award-winning author of the novels In Another Life (Sourcebooks) and The Crows of Beara (Ashland Creek Press), as well as numerous short stories and essays. Visit juliechristinejohnson.com for more information about her writing and to learn about Julie's manuscript evaluation, developmental editing, and query letter support services.