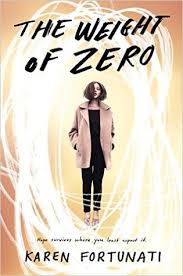 When Karen Fortunati’s smart and compelling debut novel, The Weight of Zero, begins, 17-year-old Catherine Pulaski has reached her limit. After the death of her grandmother, a suicide attempt, a stint in the hospital, and a ceaseless regimen of drugs that her mother and doctor hope will stabilize her bipolar disorder, she’s decided that instead of living like a zombie for the rest of her life, she’ll end it.

In her manic episodes, she’s painted her entire house and spent thousands of dollars planning a Caribbean vacation. She can’t drive because of her disorder and her mother’s fears. Her friends have shied away from her. The next time “Zero,” which is what she calls her depression, returns, she’s going to assemble her “soldiers,” the carefully stockpiled pills she’s keeping in an old ballet-shoe box under her grandmother’s bed. And this time she’s not going to fail.

There have been a number of standout novels about teens and depression in the last several years, including It’s Kind of a Funny Story by Ned Vizzini, All the Bright Places by Jennifer Niven, and perhaps the modern granddaddy of them all, Stephen Chbosky’s beloved The Perks of Being a Wallflower. Fortunati’s debut deserves to be ranked among them. She’s written a fine, intelligent, and beautifully crafted story of hopelessness and hope, loneliness, and love.

Head over to Goodreads and look up “young adult novels and depression” and you’ll find a plethora of books about hospitalization, suicide attempts, and the loneliness and stigma of being diagnosed with mental illness and the fear of never “being normal.”

You’ll also find a vocal fandom, both those who suffer from various forms of mental illness and those who do not, who decry the popular YA trope of “hospital heals everything.” In this tried-and-true formula, the narrator enters the hospital (usually after a suicide attempt or public breakdown), meets with initial antagonism from the other patients, partners with a gentle doctor, begins a well-planned regimen of medication, and emerges hopeful and solidly healed in three to six months, usually with a new love interest on her, or his, arm.

But the best contemporary YA novels about depression focus on after. Because it isn’t realistic to expect that help (and the hospital) heals all. The reality is that depression, and other mental illnesses like bipolar disorder or self-harm, are lifelong disorders that require daily diligence and monitoring. There isn’t a cure-all for sad.

In an ingenious trick of plotting, Catherine’s first suicide attempt is spurred by the reading of Chbosky’s Wallflower. At first, she finds herself drawn in by the story, thinking that she’s found herself within the pages of the book.

But she realizes the narrator’s reasons for depression are different than hers, and her bipolar disorder will be a lifelong struggle, not one easily fixed by dance floors and friends. Instead, her condition is remedied through long and often “hit or miss” medication strategies, which Catherine calls “nonstop pharmaceutical defense.”

Combined with the recent death of her grandmother, it’s simply too much for her to bear. Fearing she’s a burden on her already overworked single mother, Catherine decides to end it all.

Bits and pieces of that experience are sprinkled judiciously throughout The Weight of Zero. Readers watch Catherine navigate bullies and social situations at school and join an intensive outpatient program with other struggling teens like Kristal — who becomes a beacon of sorts for Catherine.

Also on the horizon is Michael, a tender-hearted potential “L.V.” Catherine has a bucket list she’d like to fulfill before the inevitable thunderstorm of Zero descends, and losing her virginity is a high priority.

“I want that,” she says. “At least once before Zero returns. And I should have it. It’s wrong to deny my body that experience. It’s wasteful to die without attempting one real, tangible connection to another human. And maybe in the time it takes to physically connect, I can shed the loneliness that I wear as a second skin. Even if just for a few minutes.”

Indeed, Fortunati does such a beautiful job describing the mindset of adolescent depression and loneliness that when Catherine and Michael kiss for the first time, it’s palpable, sad, real, and, yes, hopeful.

Catherine isn’t “healed” at the end of this novel. She’s better, that’s for sure. She’s found a group of friends, she’s learned to open herself, just a tiny bit, to the normal failures and discomfort that accompany adolescence, without shame. She’s learned, in essence, to live with herself. And, in doing so, she’s crafted a future that, at the beginning of the novel, she never thought possible.

The Weight of Zero is a fine and accurate portrayal of adolescence and adolescent mental illness. Readers will find themselves rooting for Catherine, a smart and lost girl whose voice and story will appeal to both teens and adults.

Kathleen Glasgow is author of the novel Girl in Pieces (Delacorte, 2016). She lives in Tucson and writes for the Writer’s Almanac.

The Faces of Strangers: A Novel