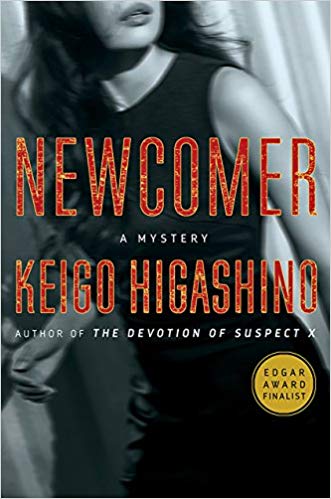 A grim murder lies at the heart of Newcomer, Japanese author Keigo Higashino’s latest novel. Mineko Mitsui, a woman who has divorced her husband and recently relocated to the Kodenmacho neighborhood of Tokyo’s Nihonbashi district, has been strangled in her new apartment. Investigators from the local precinct have teamed with the Tokyo Municipal Police to solve the crime, but too few clues present themselves: a postponed appointment with a old friend; a phone call that the woman received before her death; her strained relationship with both her ex-husband, the head of a cleaning company, and her son, an aspiring actor.

To solve the mystery of Mineko’s death, detective Kyoichiro Kaga sets out to understand her life. Like the victim, Kaga is a newcomer to the area, recently transferred to the Nihonbashi precinct after being demoted from Tokyo’s homicide division. The cause of his demotion? Allegations that “inappropriate emotional involvement” had impaired his investigation of an earlier case.

But even while Kaga remains an outsider in this new neighborhood, his inquiries lead him into emotional territory, touching deeply — even intimately — on individual existential crises and tense family squabbles, a panorama of private troubles, potentially scandalous secrets, and rapidly shifting power dynamics.

Honestly, though, the characters weren’t the reason I first picked up Newcomer. Instead, I was intrigued by the narrative structure: a novel in stories — a form close to my own aesthetic, I should add, since I’ve written one myself, also a crime novel, and also written about the form elsewhere, with reference to works ranging from Winesburg, Ohio to Olive Kitteridge.

I find it fascinating, how writers respond to the challenge of constructing a collection of narratives, each ideally with its own gem-like intensity, that together form a mosaic of even greater breadth and brilliance.

Each section of Newcomer — nine in all — is a self-contained story, with its own conflicts, its own resolution, and its own focus character, the latter loosely identified in each story’s title: “The Girl at the Rice Cracker Shop,” “The Apprentice at the Japanese Restaurant,” “The Clock Shop’s Dog,” and so on.

To the author’s great credit, the individual tales stand strong one after another, and the accumulating storyline gains momentum and weight in the process. Structure and character ultimately intertwine nicely with Kaga as the supporting person who connects each tale — searching for Mineko Mitsui’s murderer but solving other, smaller mysteries along the way, funny, seemingly throwaway questions: Who spiked a snack cake with wasabi? Why would someone buy an extra pair of scissors when the ones they have work just fine?

In solving these little side puzzles, however, Kaga also helps to resolve personal dramas and dilemmas: a mother-in-law and daughter-in-law unable to get along; Mineko’s son’s anger with his parents, his dismissal of them and rebellion against them; Mineko’s friend, struggling with guilt because she put her own needs and desires before those of the victim’s.

Several reviews of Newcomer have already compared Kaga to Columbo — Kaga’s casual, just-one-more-question approach, for example, and his unprofessional appearance (a short-sleeved shirt over a T-shirt) — but Columbo was modeled on another famous detective, Porfiry Petrovich in Dostoyevsky’s Crime and Punishment, and perhaps that earlier model proves a more insightful comparison. Porfiry, who serves not only as a detective but also as counselor and guide, focused on the spiritual and the moral, always with an eye toward those greater mysteries.

Kaga notes early in Newcomer that “understanding the psychology of people is my hardest challenge” and then draws on that understanding to reveal (with an O. Henry-esque twist) the amends that the bickering mother-in-law and daughter-in-law each plan toward the other.

Later, Kaga helps Mineko’s guilt-ridden friend find absolution and opens a door to her future happiness. Wiping tears from her eyes, the woman asks Kaga directly, “Aren’t you supposed to be investigating a murder, Detective?” and his answer is instructive: “Oh, I am investigating a murder; of course I am. But my job as a detective should go beyond that. People who’ve been traumatized by a crime are victims, too. Finding ways to comfort them is also part of my job.”

By the end of the journey, Kaga discovers who killed Mineko Mitsui (of course). But the murder, despite being the most serious crime of the book, ironically seems the most mundane in its solution.

More fascinating is the detective who brings all the stories together, helps fill them with such intimacy and warmth, and eases the people of Nihonbashi toward their small moments of grace or atonement or relief — not simply with a sense of questions answered, but with some higher order restored, with humanity itself reaffirmed.

Art Taylor is the author of On the Road with Del & Louise: A Novel in Stories. His fiction has won four Agatha Awards, the Anthony Award, two Macavity Awards, and three Derringer Awards in the mystery field. He teaches at George Mason University in Fairfax, VA.

The Blue between Sky and Water: A Novel

A deeply felt, occasionally foul-mouthed tale about a Palestinian family navigating the birth of Israel.