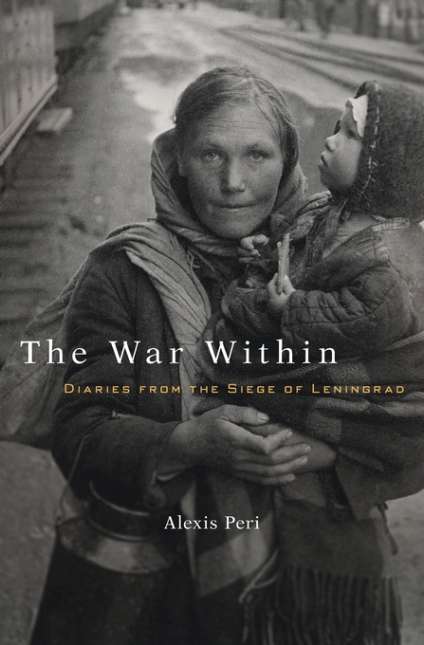 In June 1941, Hitler’s Germany turned on its ally, the Soviet Union, in a surprise attack. After six weeks, the Nazis encircled the city of Leningrad (now St. Petersburg), cut it off from the rest of the USSR — what Leningraders would come to call “the mainland” — and began the longest and most devastating siege in modern history. It lasted nearly two-and-a-half years and killed more than 800,000 civilians, or 40 percent of the city, mostly by starvation.

Aware that they were living in unparalleled times, many in the city began keeping diaries. They were encouraged in this project by Soviet officials, who intended to collect these documents when the city finally emerged victorious and use them to create a valuable People’s History.

At the end of the war, officials did indeed collect many of those diaries. But what the pages contained wasn’t the celebratory history that Stalin demanded. This was no fault of the diarists, as Alexis Peri notes in The War Within; the writers were from all walks and not a seditious lot, but the lack of official guidance from Moscow had led them to interpret truth as they saw it.

When the political winds shifted, the diaries, suddenly dangerous artifacts, were archived or hidden away and forgotten. Authors of the few diaries that did make it into print first dutifully redacted the worst horrors, along with any criticism of the State.

A sanitized and self-flattering myth of the blockade took root, which depicted the heroic inhabitants of Leningrad digging endless miles of trenches, defusing unexploded bombs, and maintaining factory production — tireless defenders of their city laboring round-the-clock to hold back the would-be invaders. What had been the defining experience of the Siege for most of the diarists — starvation — was hardly mentioned in Soviet-era publications.

After Glasnost in the 1980s relaxed social controls and allowed publication of unofficial accounts of the blockade, a new version of the history emerged, one freer of propaganda and more balanced in its portrayal of human strengths and foibles. While these narratives also recorded extraordinary endurance and acts of selflessness, they were complicated by recollections of inhumanity, theft, and corruption, even occasional dark hints at cannibalism.

Still, reminiscences of the survivors, the blokadniki, were colored by the memory’s tendency to conform to decades of suggestion, as well as long-ingrained habits of reticence, fears of not being believed, and the understandable desire not to relive trauma.

Now, The War Within removes another layer of obfuscation from the blockade story. Peri examines 125 rediscovered and unpublished diaries and finds significant commonalities in the individual accounts that set them at odds with received history. She reports, for instance, that “Incidents of altruism and cooperation appear in memoirs and interviews of blokadniki but rarely in diaries.”

The nuclear family, celebrated in blockade myth as a cornerstone of security and survival, is more often disparaged in the diaries as a questionable institution and a source of painful obligation. In the diaries, frequent reference is made to “bomb psychosis” and “hunger psychosis,” terms that were in wide use during the war, apparently, but never made it into the official literature.

However, it is the nature of diary-writing itself — first-person, present tense, and intensely self-reflective — that most sets these journals and Peri’s analysis of them apart from more familiar, big-picture accounts of the siege. Even the diarists’ subjectivity is a benefaction: With an event this extreme in its horror, a tight focus often gets closer at the humanizing truth than a wide lens.

In devastating intimacy, the diaries disclose the private struggles of individuals to extract meaning from unimaginably dire circumstances, as well as the philosophical and psychological approaches they brought to bear on their suddenly unrecognizable lives and their own disappearing bodies.

As one diarist explained, “We live in a state of half consciousness, and only at moments of such clear, torturous vision does all the craziness and cruelty of our existence become exposed. This opens a door to truth, which you instantly slam shut against with all your might, so that it flings open less often. Otherwise, it is unbearable.”

The War Within pries opens that door, too long sealed shut. This is a People’s History of the siege, realized at last, and as such should be added to the short list of essential reading on the subject.

Debra Dean is the author of two historical novels set in St. Petersburg, The Madonnas of Leningrad and The Mirrored World. She is an associate professor in the MFA program at Florida International University in Miami.