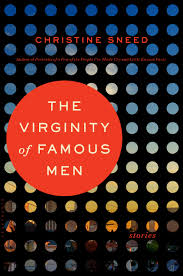 The temptation with this new collection of short stories is to call their author the queen of ambiguous endings, but in fact, Christine Sneed is, simply, the queen of endings. The last page of nearly every one of these stories screams out to the reader, “Read me again, over and over.”

Sneed takes her characters to the brink of something at the end of each story, but the brink of what exactly can be hard to say. The characters may not have reached the understanding they need to make sense of what has happened to them. They may not even realize they need this insight. They may not have a clue at all about where they’ve washed up and what has just washed over them. These are the truest kinds of endings in contemporary fiction, and Sneed executes them beautifully.

Without giving too much away, here are a few examples of the kinds of places Sneed likes to leave her characters: a woman stares down from her window at the party tent she has rented, baffled by the tent’s meaning; a young man puzzles over his reaction to a former girlfriend’s bizarre sexual comment about his famous father; a teenage girl struggles to know what to say to the blind man she helps after school when his life falls apart. Their puzzlement is always about much more than these immediate circumstances. Each of these characters is desperate to make sense of something huge and mysterious; ultimately, they are trying to understand themselves.

An ending is only as good as its closing line, and there are many great ones in this collection. “The Functionary” ends with an evocative sentence reminiscent of an Escher drawing: “He had learned long ago that if he stood before one mirror with another mirror behind him, his image would endlessly repeat itself.”

In “The New, All-True CV,” a hilarious take on how a résumé would look if it included the things that were actually true about a person’s history, the last line is an enigmatic, but under the circumstances, perfect question about a wolf and a mosquito.

Sneed not only excels at endings, she creates fascinating beginnings and middles, as well. She presents characters who comprise a dazzling range of age, class, gender, and circumstance, getting inside the heads of Hollywood producers, self-absorbed teens, middle-aged mothers, college students, political climbers, working-class call-center employees, trust-fund kids, and celebrity ex-wives.

She captures something true and subtle of the essence of each experience. For example, in “The Prettiest Girls,” she illustrates the boundless ambition and naiveté of a poor, young Mexican woman who has run off with an older American man. “She had to touch everything and smell it too — not just the soap and lotion and shampoo in the bathroom, but the bed linens, the curtains, the paint on the walls, the armchair next to the TV, even the telephone. ‘It all smells so clean,’ she said blissfully.”

In “Beach Vacation,” a mother confronts her belligerent 17-year-old son’s new sexuality and independence, and her envy of both. As she watches him flirt with an attractive older woman, she is “close enough to smell the coconut lotion the woman had applied to her slender body” and is stunned into silence. “When had it happened? she wondered. When had he become a boy who felt that his mother did nothing but limit him, that she lived only to hold him back, to keep him from experiencing the things adults claimed as their inalienable right? He wanted sex, possibly love, and he was determined to have them, whether she wanted him to or not.”

These stories also explore the many shades of loneliness in the world, the gulfs between people that exist despite earnest efforts to connect. These are stories of stuck people who do not get unstuck. Often, it is the toxic, primitive poison of jealousy that freezes them where they are. For many, a lack of understanding of themselves, of what they need and what drives them, keeps them from moving forward.

Yet for all these glimpses into dark corners of human life, Sneed’s stories also emit light. She crafts nuanced portraits of all sorts of people who never give up struggling to make sense of what they’re experiencing. Her characters work hard. They try to confide, they try to love, even when it doesn’t quite succeed. Their striving to understand is the unending, important project of their lives.

And Sneed nails their voices. Her ability to imagine with such precision the complexities of her characters’ lives shines in the musings of her narrators. Josephine, the adolescent narrator of “Five Rooms,” takes readers completely into her world when she thinks about her mother’s boyfriend Ron.

She is sure that her mother “wants to have Ron over and have sex with him in her bed, instead of in his nasty waterbed that upsets her stomach if she does too much sloshing around on it with him. She has never said why she gets upset stomachs after seeing him, but I think that must be the reason. I’ve been on a waterbed myself, with Brent Boliona, who is not my boyfriend, but for two weeks right before tenth grade, when I was twelve pounds skinnier and had used a lot of Sun-In on my hair that summer, he sort of was.”

The Virginity of Famous Men is a stunning collection. The lives in these 13 stories are exquisitely imagined, utterly convincing. They are contemporary American lives, messy and striving and restless and complicated, lives that are brought together by curious connections and pushed apart by haunting distances, lives that are listened to carefully by Christine Sneed’s perfect ear.

Sally Shivnan is the author of the short-story collection Piranhas & Quicksand & Love. Her fiction and essays have appeared in the Georgia Review, Antioch Review, Glimmer Train, and other journals, and her travel writing has been featured in anthologies including Best American Travel Writing, as well as in the Washington Post, Miami Herald, Nature Conservancy Magazine, and many other publications and websites. She teaches at University of Maryland Baltimore County (UMBC).