Strong characters and an ambitious plot make for an engaging — if uneven — debut novel. 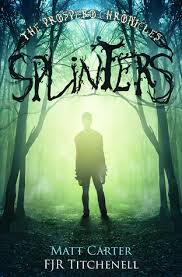 Invasion of the Body Snatchers comes barreling into the 21st century of young-adult sci-fi with FJR Titchenell and Matt Carter’s combined debut, Splinters. While not billed as a direct adaptation of the 1950s classic, it is hard to ignore the influences from older paranormal works.

Better yet, Splinters adds to the genre, delivering a few thrills and unexpected twists in terms of its world-building. But in spite of these additions, tantalizing characters, and an explosive final act, the title itself suggests how the novel reads — like a refreshing concept that doesn’t quite piece itself together.

Splinters kicks off as Ben Pastor, the token new kid in town, acclimates himself to Prospero, California. The place is claustrophobic and strange as only a small town can be. Of course, not all is as it seems in this quiet community. People are disappearing, messes are concealed, and neighbors are turning a blind eye — everyone except Mina, an obsessive monster-hunter on the trail of whoever, or whatever, is plaguing Prospero.

Armed with answers and filled with trust issues, Mina all but drags Ben into the middle of a cold war far larger and more dangerous than either of them can comprehend. After all, how do you fight back when you cannot distinguish your family member from an interdimensional body double? Dad is looking awfully suspicious right about now.

The story is split between two viewpoints. Ben may be the readers’ point-of-entry into this world, but Mina is the one who knows the lay of the land and how best to deal with the alien Splinters.

These characters are distinct and fun to follow. Ben’s chapters read much differently than do Mina’s — her voice is enjoyably stunted and technical, dishing out bizarre terminology, descriptions of homemade gadgetry, and quirky humor in equal parts.

ECNS? Probable Non-Splinters? A great deal of time is spent exploring her headspace while she grapples with both inhuman dangers lurking in the woods and human emotions, like dependence, friendship, and love. These idiosyncrasies make her feel more real. It is pretty neat to watch the cracks in her armor, yet you want to root for her to come out on top, to prove she is not just some crazy shut-in. Ben is a bit blander in comparison, but he begins to come into his own by the novel’s end.

Titchenell and Carter employ a lot of familiar tropes throughout the novel — the popular girl, the infamous love triangle, the tech kid, the over-the-top drama teacher, and the cool, aloof guy. Many of the secondary characters, the townsfolk, seem cookie-cutter.

But this fakeness adds to the vibe that things aren’t quite as they should be. It actually works in the authors’ favor. Tropes lead to reader expectations, which make it all too easy to have the rug pulled out from underneath our feet.

The drama opens with a lot of potential and a ton of questions. Why does Mina act the way she does? What’s Prospero hiding? Why is Ben such an impossibly well-rounded teenage boy?

In the beginning, the suspense works. The first chapter is a page-turner. An unknowable enemy is out there, quietly suffocating the entire town. Our two unlikely heroes are in deep trouble, battling a faceless foe. The mystery builds and builds through Act One, but the story starts to trip over its own feet near the middle.

Unfortunately, pacing proves to be a problem, too. The burden falls on the book to set the stage and draw readers into its familiar yet paranormal world. As a result, the authors have a bit of explaining to do.

While the exposition is important for readers to grasp what is going on, it can bog the narrative down. Despite the first-person point of view, at times it feels like the reader is being told what is happening, or what has happened, instead of being shown via Ben and Mina.

Their verbal sparring and clashing personalities provide enough of a reason to keep pushing onward, but the story struggles to capture its initial momentum. Still, Titchenell and Carter pull it off. As tension ramps up in the final act, Splinters really hits its stride. The cold war boils over. The stakes are high. The action is intense.

There is a lot to like in this ambitious debut. Mina is captivating, and it is fun to watch her change and grow as a character. The book has a massive scope, which leads to some intriguing implications for future installments.

Here’s hoping the inevitable second entry in the Prospero Chronicles can pick up some of these pieces and deliver a more fast-paced and engaging adventure while retaining the great characterization.

Joe Dell’Erba is a freelance reviewer here at the Washington Independent Review of Books. As a recent college graduate, he’s on the lookout for any professional excuse to read and write creatively every day. You can find him on Twitter at @jtdelle or discuss the beauty of a good cup of coffee with him at jtdellerba@gmail.com.