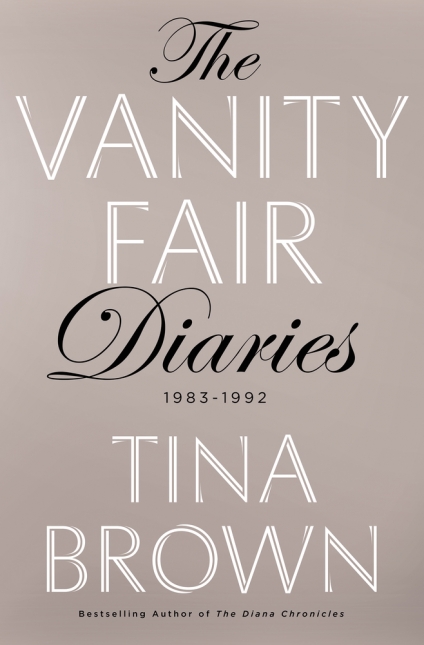 The British excel as diarists, the most famous being Samuel Pepys, followed by James Boswell (the biographer of Dr. Johnson), and Virginia Woolf, the beacon of the Bloomsbury Group. Currently, Alan Bennett, 83, reigns supreme.

Now comes Tina Brown pawing at that pedestal with The Vanity Fair Diaries: 1983-1992, which chronicles her glory days as the English editor who came to America to revive the magazine, and later to resuscitate the New Yorker. For this she deserves heaps of Yankee praise.

Once I got my mitts on her book, I did what everyone will do: I turned to the index. Back in 1989, I was lucky enough to be selected along with Ted Turner, Diane Sawyer, Steven Spielberg, and others (plus the tombstone of Andy Warhol) as part of “the Media Decade” in Vanity Fair’s Hall of Fame. Each of us was photographed by Annie Leibovitz, who signed and sent originals of the shots as Christmas presents. I was curious to see if the diaries mentioned that 40-page spread in the magazine.

Flipping to the back of the book, I see one entry on page 347 about “the biggest media influencers” of the era. Wowza. There I am. Whoops. “Trashy Biographer Kitty Kelley.” But I’m not alone. Similar smackdowns await others.

She bashes Oscar de la Renta as a “conniving bastard,” but after a kiss-and-make-up lunch, she sees “a nicer side of Oscar at last.” Arnold Scaasi is “the dreaded frock miester,” and Richard Holbrooke “an egregious social climber.”

After inviting Jacqueline Kennedy Onassis to a dinner party in honor of Clark Clifford, Brown dings the former First Lady (“Jackie Yo!”) as “crazed,” writing: “I felt if you left her alone, she’d be in front of a mirror, screaming.” Then she zaps Onassis for “understated malice” in not “writing me a thank you note.”

Midway through these diaries, you might think that most of Brown’s roadkill has been gathered up and gone to the angels. Given the passage of time, some attrition among the grandees of Gecko greed is understandable, but one wonders if Brown would’ve disparaged Si Newhouse, her billionaire benefactor at Conde Nast, as “a hamster,” an insecure “gerbil” frequently in “chipmunk mode,” if he were still alive. Safely dead, he gets blasted for having “no balls at all” because he caved to Nancy Reagan’s request to see Vanity Fair’s profile of her and the president before publication.

Read on, though, and you’ll see that Brown’s slingshot takes equal aim at those not yet consigned to the cemetery. Kurt Vonnegut’s photographer wife, Jill Krementz, is zapped for “extreme pushiness”; Henry Kissinger “is a rumbling old Machiavelli”; Peter Duchin “name drop[s] at deafening volume”; Robert Gottlieb, Brown’s predecessor at the New Yorker, is “a preposterous snob”; and Clint Eastwood is an excruciating bore.

“How could one be bored after one course with the world’s biggest heartthrob?” she asks. “I was.”

She cuffs her former friend Sally Quinn for disinviting her to Ben Bradlee’s birthday party because of Vanity Fair’s book review by Christopher Buckley, who characterized Quinn’s first novel as “cliterature.” Sally was “wild with fury,” Brown writes, a bit puzzled that “the sharpshooter journalist,” who had once libeled Zbigniew Brzezinski, would be so sensitive.

(In a profile for the Washington Post, Quinn wrote that Brzezinski, then national security advisor to President Carter, had unzipped his fly during an interview with a female reporter from People, which Quinn claimed had been captured by a photographer. The next day, the Washington Post retracted her false story: “Brzezinski did not commit such an act, and there is no picture of him doing so.”)

Brown does not chop with a cleaver. She wields her scalpel with surgical precision, blood-letting with small, incisive cuts. She doesn’t linger over the corpse, either. In fact, in these diaries, she jumps from mourning the death of a friend one day to tra-la-la-ing the next as she sits with Vogue’s Anna Wintour, drawing up guest lists for yet another dinner party.

Brown makes intriguing entries about New York’s new-money barons, particularly Donald Trump, who keeps a collection of Hitler’s speeches in his office. On February 23, 1990, she writes that Trump, in between wife number one and two, is “having a fling with a well-known New York socialite. If true, this could give Trump what money can’t buy — the silver edge of class.”

Alas, she doesn’t reveal the name of the silver belle, but she does relate that Trump, enraged by Marie Brenner’s 1988 takedown of him in Vanity Fair, sneaks behind her at a black-tie gala and pours a glass of wine down her back.

One marvels at Brown’s indefatigable energy as she sprints from breakfast with Barry Diller to lunch with Norman Mailer to dinner with the Kissingers. Every day, every night: the parties, the premieres, the galas, the spas, the stylists, the hairdressers, the designers, the limousines. Even she admits exhaustion at her frantic drive to see and be seen — all in service to her role as editor, of course.

These diaries are a celebrity drive-by of the great and the good and, sprinkled with high and low culture, are written with style but little humor, save for the night the newly arrived London editor attended her first Manhattan cocktail party and met Shirley MacLaine.

“What do you do?” Brown asked the movie star. This is laugh-out-loud funny, except to someone who’s laughed in many previous lives. MacLaine was not amused. Upon meeting Lana Turner when the MGM siren was 62, Brown, then 29, decides to “get a piece done that uses her [Turner] as a prism for all the glamorous stars who age without pity.”

The British writer Graham Boynton, who applauds Brown’s high-octane journalism, wrote affectionately in the Telegraph about her early days editing Vanity Fair. Reading a submitted draft for the Christmas issue, she scribbled, “Beef it up, Singer.” Boynton recalled, “It had to be tactfully explained to her that Isaac Bashevis Singer was a Nobel Prize winner for literature.”

I’m knocked out by these diaries, marveling that they were written at the time in such perfect prose. Do all her sentences fall to the page like rose petals in a summer breeze? No editing? No rewriting? No tweaking? If so, this “trashy biographer” genuflects. (My own diaries read like the daily romps of an unhinged mind scrambling for cruise control.)

Diaries provide a psychological X-ray of the diarist, an unintentional autobiography of sorts, and these entries show a woman of immense talent consumed with her dazzling career. And as tough as she is (and must be) in a man’s world, her feminist self resents being dismissed.

When Ad Age demeans her as a “starlet wanting to play Juliet,” she punches back. It’s “fucking sexist crap,” she writes. “Women get stuck with being trivialized and just have to smile.”

Flicking off such criticism like a fuzzball from cashmere, Tina Brown smiles all the way to the bank and then rockets upward, leaving the rest of us in her high-heeled wake.

A story of bravado in early shadow warfare.