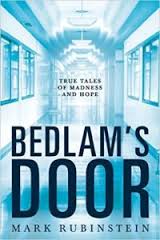 Although stories of individuals suffering from mental illness are regularly reported in the media, too often the background information and resolution are missing. Readers are given the sensational outcome of some public tragedy or confrontation, but little is known about the people involved and their unique circumstances.

Of course, many families are touched by mental illness in one way or another. But for others, the nightmare and the challenges remain a mystery. For this reason, a new book by psychiatrist Mark Rubinstein is a welcome anthology of cases from his years in practice. Bedlam’s Door is a riveting and sympathetic glimpse into the lives of people dealing with various types of mental illness.

Rubinstein, who is also a prolific writer of both fiction and nonfiction, provides 14 vignettes of patients he has treated. These brief case studies, covering about 20 pages apiece, are methodically presented. First, readers are introduced to the circumstances of the patient’s appearance in the hospital or examining room. Then they’re given the patient’s background, after which Rubinstein concludes with an afterword, reporting the resolution or uncertain outcome of each case.

Each story highlights a psychiatric problem such as post-traumatic stress disorder, survivor’s guilt, psychosis, obsessive-compulsive behavior, or depression. He tackles pain, both physical and mental, and suicide. And he weaves in comments related to professional responsibility, legal liability, deinstitutionalization, and the merits of psychotherapy versus medication.

The strength of Rubinstein’s work is the storytelling ability that he has sharpened as a novelist. He provides detailed descriptions of patients while at the same time creating a compelling setting. With the addition of recreated dialogue, the overall result is a highly readable book which engages and informs.

Many of the stories, some of which reflect composite characters, are memorable, even shocking; some might dwell in the reader’s mind for a long time. The initial story is a good example. An elderly man of Eastern European heritage is brought into the hospital yelling that he’s “king of the Puerto Ricans.”

The man, “Nathan B.” becomes agitated after he gets injured and can no longer work as a carpenter. It turns out that his work prevented him from dwelling on his time in a Nazi concentration camp, where his family perished. Being removed from his life’s calling causes him to snap, and he falls victim to post-traumatic stress and survivor’s guilt.

In another, “Mr. Smith” is brought to the hospital because of his loitering around a high-class hotel. Unkempt and dressed in a dirty but well-tailored suit and carrying a briefcase, he says he had planned to reserve a hotel suite. After examining him, Rubinstein coaxes the man into showing the contents of his briefcase; it holds millions of dollars’ worth of Monopoly money. This patient did get his room, but it was in the psychiatric ward.

“Dr. Papalini” was discovered by Rubenstein not to be a doctor at all, but rather a homeless man who wandered the hospital, lived and ate there, picked up a physician’s garb, and even treated patients. When confronted with this serious breach of security, the imposter said that he had to consult his assistant, a brown hamster in his pocket.

A somewhat humorous encounter involves “Joey P.” who consults Rubinstein because he’s having difficulty interacting with his father in the family business. The business is organized crime, and although some of the sessions are helpful, the relationship ends after the psychiatrist is asked by the patient, “You wanna know who clipped Carmine Galante?”

The book ends with a short discussion of the status of psychiatry today and what might lie ahead. The author also includes a helpful glossary of medical and psychiatric terms as well as a bibliography which provides articles on the conditions treated. The book could have been stronger with an overarching preface or a concluding chapter to tie the varied stories together. Still, this quick read will provide lingering insights.

Joseph A. Esposito writes reviews on topics related to history and biography. A former government official and currently a history faculty member, he is working on a book entitled Dinner in Camelot: President and Mrs. Kennedy Host America’s Greatest Intellectuals, dealing with an evening held for Nobel laureates and other American intellectuals at the White House in 1962.